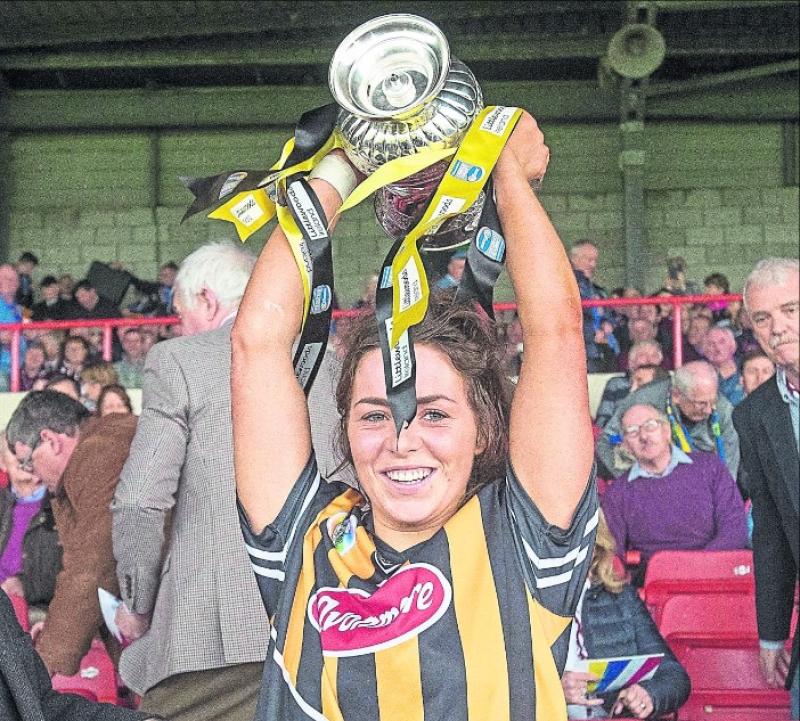 Kilkenny were a bit surprised, and absolutely delighted, to retain the Division I title in the National Camogie League, especially as they did so with a largely young team.
Seven players who started in the final against Cork were new to the senior scene, and weren't directly involved in the All-Ireland win last year.
"These youngsters are fearless," suggested Kilkenny manager, Ann Downey, with a hint of amusement in her voice. "They don't care who they are marking or who they play against. They play with brilliant freedom."
Ms Downey is joined on the sideline by selectors, Paddy Mullally, Liam Egan and Conor Phelan and all were thrilled that a team containing seven newcomers coped so well with the pressures of playing in a national decider.
Now the Cats have the chance to do another League/Championship double as they did last season.
"The older girls work to bring the younger ones along. The whole thing now is to keep the feet on the ground," the manager continued.
"The championship is different. I don't think there is any fear of the girls losing the run of themselves. They had to wait a long time, and suffer the pain of defeat many a time, to enjoy the good times they are now experiencing."
And the girls are determined to drive on. Management gave them the option of taking a break from training after the League success, but the girls said no.
The squad returned to training on Tuesday evening in preparation for a Leinster championship clash with Dublin in Dublin in two weeks time.
"That sort of attitude is brilliant from the girls," Ann Downey continued. "They have matured immensely since winning the All-Ireland last year.
"The way they carry themselves; their behaviour. They are a credit to their clubs and families. When Wexford and Cork beat us in the League we didn't think we would end up as champions, but the will was there, the determindation was there to win again.
"The management team couldn't be more delighted with them," she insisted.
Ann Downey, a 12 times All-Ireland medal winner during her career, said some of the girls like Katie Power and Denise Gaule had been waiting since 2009 or so to win an All-Ireland, and their hunger wouldn't be satisfied with one medal.
"Some of the girls were only 18 when they lost their first All-Ireland," Ann reminded. "They played in three or four All-Irelands and didn't win. They had to bottle that disappointment and turn it into a driving force.
"This could be their time to achieve, but it all depends on themselves," she insisted.
Hard work, she said, was the first requirment. The motto in the Kilkenny camp was that you controlled what you can control. That meant training hard and well, and looking after yourself generally.
The girls, Ann explained, train three nights a week but beyond that they are very disciplined in the way they look after themselves in terms of diet, stretching, training, doing recovery sessions and so on.
"They have to buy into everything," she insisted. "That is where the game is at now. “You can't train for three days and do what you like for the other four. They are very good that way.
"Today is the start of the championship preparations," she said. "Sunday was about winning a national title, performance and so on. We did that. Now you park it.
"Sure, be delighted you won, but there is a lot of hard work ahead of us in the weeks before the championship starts. There were a lot of good things in the League final performance, but there were some things that weren't so good.
"The number of young players involved in the win was most satisfying," Ann assured. "Seven who started the League final didn't figure in the All-Ireland win last year; they weren't even on the panel. That is really satisfying.
"When they get on the field and something is not working, they are able to correct things. We are not all the time directing them. That is a real sign of maturity.
“They are eager to do well, and to do things right. They seem to be able to address situations as they arise. In the first half of the Galway semi-final they didn't press home their advantage. They sorted that out, and they did so in the second half.
"It was the same in the final. The senior girls, the likes of Ann Dalton, Claire Phelan and Emma Kavanagh in goal, give direction. They look after the younger girls when they come into the panel. They make sure they feel part of the set-up and they understand what is expected of them.
"The championship will be completely different," Ann Downey insisted. "We only scored 1-1 in the second half against Cork. For a lot of that half our backs were to the wall.
"We will have to improve 100%. Some of our decision making wasn't great.
“It is great to win the League final knowing we didn't play as well as we can, and knowing there is a lot of imrovement to be made before we tackle the championship," she concluded.