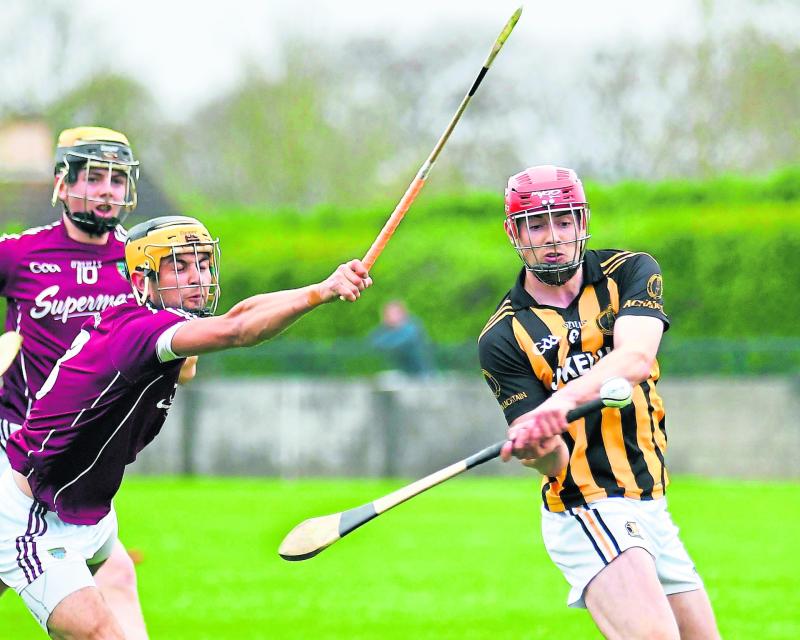 St Patrick’s (Ballyragget) got the better of St Lachtain’s (Freshford) in this gripping battle of the saints.

St Pat’s had two points to spare in an entertaining and competitive first round intermediate hurling league/championship game at Ballyragget on Friday.

The Ballyragget side had the assistance of the fresh breeze in the opening half.

The scores were level three times by the 10th minute at 0-3 each.

The St Pat’s scores came from Michael Brennan (play and a free) while Joe Brennan added the third one. St Lachtain’s hit back through Liam Hickey (free), plus one each from Noel McGree and James Maher.

During the next 15 minutes or so St Lachtain’s hit a golden spell, and they made hay.

Brian Kennedy drove them on from wing back as they went six points ahead.

Both sides were guilty of missing some good scoring opportunities, with the Freshford side the more error prone.

In the 26th St Lachtain’s grabbed their goal when Liam Hickey fired in a great shot which was well saved by goalie Michael Gannon. However, the rebounding ball fell kindly for Shane Donnelly, who duly crashed it into the net.

This was added to quickly by the hard working McGree, who raised a white flag to give his side a lead, 1-8 to 0-5.

Michael Brennan replied with two pointed frees for St Patrick’s to leave his side four adrift at the break, 1-8 to 0-7.

During the early stages of the new it was all St Patrick’s.

Conor Delaney snapped up an early point and then Michael Brennan converted four frees into points as St Lachtain’s felt the heat and were guilty of conceding some needless frees.

In the 44th minute disaster struck for St Lachtain’s. A short puck-out was turned over and Paddy Brennan was on hand to fire home a goal to leave St Patrick’s four points in front, 1-12 to 1-8.

Hickey and Brennan exchanged pointed frees before St Lachtain’s missed a great opportunity to reduce the score to the minimum.

Two pointed frees by Liam Hickey kept his side in touch before Michael Brennan replied with a point from play.

A pointed sideline and a point from play from Hickey left his side one adrift with time running out.

On the call of Michael Brennan converted a free from out on the side to give St Pat’s a victory.