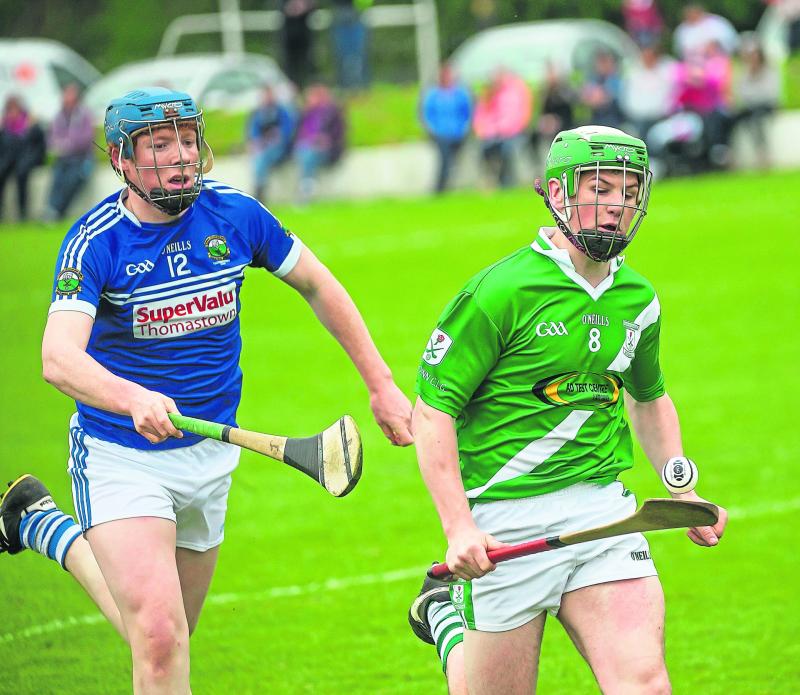 Thomastown produced a big finish to deny Mooncoin victory on their return to the intermediate hurling grade after an absence of over three years.

Thomastown did not have it all their own way, however.

The game was played in ideal conditions in Mullinavat on Sunday. Mooncoin, backed by the slight breeze, opened the scoring with a point by Alan Walsh.

A flurry of scores followed. Kevin Crowley sent over a free for Mooncoin from a huge distance in the third minute before Dylan Caulfield opened Thomastown’s account with a nice point.

Less than a minute later John Donnelly followed suit. Barry Whelan added another for the ’Town before Dylan Caulfield scored his first free.

Alan Walsh then added his second from play for Mooncoin in the 10th minute to leave the score 0-4 (T) to 0-3.

Caulfield and Crowley traded frees before Mooncoin’s Paul Henebery sent a dummy pass which deceived the Thomastown defence before he split the posts.

Kevin Crowley continued his accurate free taking, scoring a effort from inside his own half. Dylan Caulfield did likewise for the ’Town to level it in the 18th minute.

Ray Wall also pointed a free for Mooncoin with minutes remaining in the half.

However, there was still time for Alan Walsh to add his third point from play. John Donnelly also scored a great point from play for the ’Town, with Kevin Crowley adding another from a free deep in injury time.

The winners came out with all guns blazing in the new half.

Starting centre-forward Jonjo Farrell was moved to full-forward, and this had an immediate effect. Farrell zigzagged his way through the Moon’ defence in the opening minute before launching a rocket towards goal.

The shot hit the crossbar, but Thomastown reacted quickest. Farrell was again played the ball, and this time he was dragged down in the square.

This score was quickly followed by one from Pa Walsh, who settled Mooncoin by sending the ball over the bar after winning a sideline. Jonjo Farrell had another great chance of a goal, but the attempt was saved by ’keeper Purcell.

Mooncoin scored two frees in quick succession by Kevin Crowley, and another point from play by Paul Henebery gave them something of a cushion.

This advantage was short lived. Thomastown scored a goal midway through the half. Adrian Burke had a shot saved on the line. However, the ball broke to Jonjo Farrell, who blasted it home.

However, any Mooncoin comeback was stifled by two points in quick succession from Thomas O’Hanrahan and John Donnelly, which put Thomastown ahead with 12 minutes remaining.

Robbie Donnelly landed another free for the men in blue and white, while Jonjo Farrell picked off his first point of the day.

Mooncoin but were beaten back on two occasions. Adrian Burke added a point for Thomastown, which was followed by a free from Robbie Donnelly.

Pa Walsh kept Mooncoin’s hopes alive with a point from play. But Robbie Donnelly added two more scores from placed balls before John Donnelly added a brilliant point from a sideline cut in injury time to cap off a great second half performance by Thomastown.

Best for the winners were John Donnelly, who got better as the game wore on; Jonjo Farrell, especially in the second half when he repeatedly attacked the Mooncoin goals; Sean O’Mahoney and the midfield partnership of Barry Whelan and Dessie Walsh.

Also, Robbie Donnelly was good in the second half.

Mooncoin’s best performers were Alan Walsh and Kevin Crowley, who contributed most of their scores. Crowley’s free taking was very accurate. Pa Walsh fought hard, as did Mark Kearns and Eoin Purcell, who made two good saves.