Kilkenny's Mullins is No. 1 again - for the 10th successive season 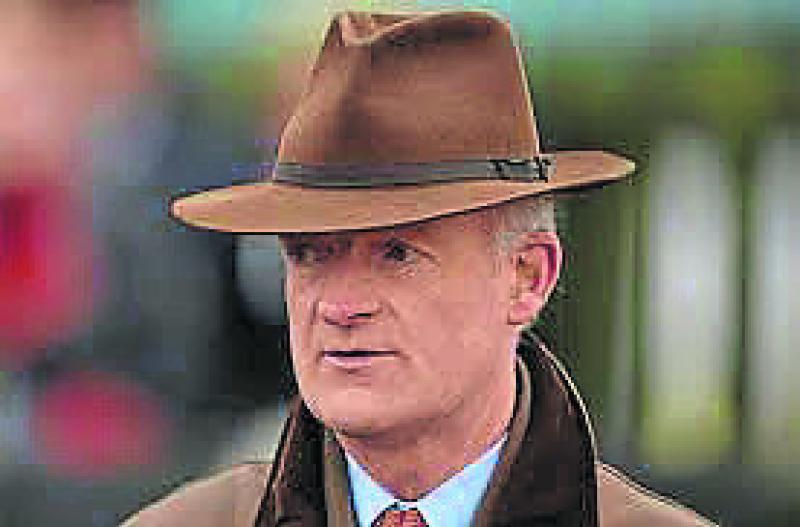 Willie Mullins is the champion trainer for a magnificent tenth successful season.
The curtain came down on the 2016/2017 Irish National Hunt season at Punchestown today and Mullins had plenty to celebrtate when it did.
Horse Racing Ireland chairman Joe Keeling made presentations to the season’s leading owner, trainer, jockey, amateur rider, conditional rider and lady amateur rider, and Mullins earned top honours again.
Willie Mullins got the better of Gordon Elliott in a tremendous battle for the trainers title that went down to the final day of the season.
For the fifth time, Gigginstown House Stud won the Champion Owner title. The title of Champion Amateur Rider also went down to the wire with Jamie Codd edging out Patrick Mullins, in the last race of the season, by just one winner.
Ruby Walsh is Champion Jockey for a record 12th time and Tipperary native, Rachael Blackmore is the first female to win the Conditional Riders’ title while Nina Carberry is again the Leading Lady Amateur Rider.
One of the great talking points of the season was the race to be crowned Champion National Hunt Trainer.
The Irish National Hunt Festival at Punchestown has been good to Willie Mullins over the years and he eventually reeled-in Gordon Elliott to retain his title.
Guinness Galway Hurdle winner Clondaw Warrior was Mullins’ biggest winner of the season, and among his Grade 1 winners were Nichols Canyon, Vroum Vroum Mag, Djakadam, Douvan, Min and this week’s winners, Cilaos Emery, Great Field, Wicklow Brave and Bapaume.
With 193 winners, Gordon Elliott equalled Willie Mullins’ record for the number of winners in a season, set in 2012/2013.
Successful in the 2009/10, 2012/13, 2014/15 seasons and again last year, Gigginstown House Stud have retained the Champion Owner title.
Their biggest success of the season came in the TheTote.com Galway Plate with Lord Scoundrel while there were notable wins in the Guinness Kerry National for Wrath Of Titans, the Lexus Chase with Outlander, the JT McNamara Munster National with Tiger Roll, the JNwine.com Champion Chase with Valseur Lido and the Ladbrokes Troytown Chase with Empire Of Dirt. Winning hurdlers Apple's Jade, Petit Mouchoir, Death Duty and Ice Cold Soul also played their part.
Ruby Walsh has long had his 12th Champion National Hunt Jockey title wrapped-up and he ended the season on 131 winners, equalling his previous best tally, a record he set in 2007/2008.
Ruby’s most valuable success of the season came on Clondaw Warrior, part-owned by his wife Gillian, in the Guinness Galway Hurdle last July. He also enjoyed Grade 1 success with Valseur Lido, Douvan, Min, Nichols Canyon, Djakadam, Vroum Vroum Mag and Bapaume. Jack Kennedy, who only turned 18 a week ago, will finish runner-up in the title race with 68 winners.
Patrick Mullins and Jamie Codd have gone head-to-head all season in the race to be the leading Amateur Jockey. Jamie comes out on top with 41 winners to Patrick’s 40.
Jamie rode winners on Enniskillen, Fayonagh and Minutestomidnight at Punchestown this week to secure his first Champion Amateur title. From Mayglass, County Wexford, Jamie is also the current Champion Point-to-Point Rider.
Rachael Blackmore is the first female jockey to win the Conditional Riders’ title. From Killenaule, County Tipperary, Rachael only turned professional in March of 2015 and enjoyed her most notable success of the season at Naas in March when she landed the Ladbrokes Leinster National Handicap Chase on the Ellmarie Holden-trained Abolitionist.
Although Nina Carberry hasn’t ridden since announcing her pregnancy in early November, she collects the Mary Hyde Perpetual Cup for Leading Lady Amateur Rider with 20 winners.
Horse Racing Ireland Chief Executive, Brian Kavanagh, said the season was memorable for so many reasons and the battles between Willie Mullins and Gordon Elliott and Patrick Mullins and Jamie Codd have been well fought.
"I would like to congratulate all our National Hunt champions and pay special tribute to Rachael Blackmore on her achievements over the course of the season,” he said.