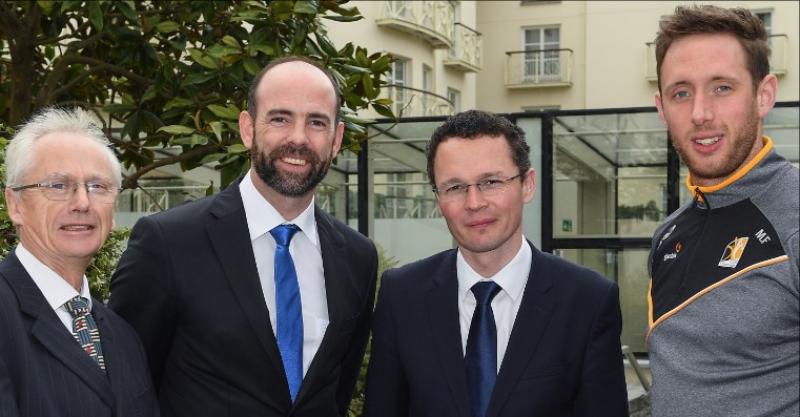 Kilkenny star, Michael Fennelly, was in attendance when the Minister of State for Tourism and Sport, Patrick O’Donovan TD and the GPA announced the commencement of the next phase of Government grant payments to players.
This year will see the first tranche of the new funding agreement being paid to players over the next week. Grants awarded to players will range from €519 to €1,066 based on performance in the 2016 championships.
As with previous agreements, Sport Ireland provided the funding to the GAA who are working with the Gaelic Players Association for the appropriate disbursement of the grants to the players.
The scheme operates by way of refunded expenses which provides practical support to players and allows them to continue playing their sport at the highest level all over Ireland, while also maintaining a career or studies.
As well as promoting increased levels of physical activity, Gaelic players can act as important role models in a number of other key government policy areas at local and national level. These include the promotion of mental health and wellbeing, the fight against obesity and the prevention of alcohol and drugs misuse.
In addition to supporting national policy, under the new agreement inter-county players will have increased involvement in promoting healthy lifestyles at a local level through the Local Sports partnerships in every county.
Minister O’Donovan said the Government’s investment in this agreement showed how important Gaelic Games were to the country.
"It is an affirmation of the contribution of these sports to our communities, our culture and our sporting pride," he added. "Our Gaelic Games players give tireless commitment to club, community and county and I am glad to acknowledge this commitment today.
"The areas of mental health, obesity, adult literacy and alcohol and drug misuse as well as efforts to increase physical activity levels across the population are ones which must be highlighted. It is fantastic that we have these players as role models to assist in the promotion and awareness of these issues.”
Dermot Earley, GPA CEO felt the players were role models in Irish society and were leaders in their community and parishes.
"It is important that we recognise the huge positive impact that they have on our society and Ireland as a whole. We are delighted that players will receive their grant payments this week.
"We fully support this new agreement and the focus it places on players helping to promote health and physical activity," he added. "Working with their local sports partnerships inter-county players will take a lead role in helping to promote health and physical activity in their own communities as well as key national policies.”
John Treacy, Sport Ireland said Sport Ireland welcomed the new agreement with the GPA which will see inter-county players support the promotion of key policy areas across a number of Government Departments.
"The inter-county players are ambassadors for their communities and will assist the local Sports Partnership network with promotion of healthy living and physical activity at a local level, as well as key national initiatives,” he insisted.