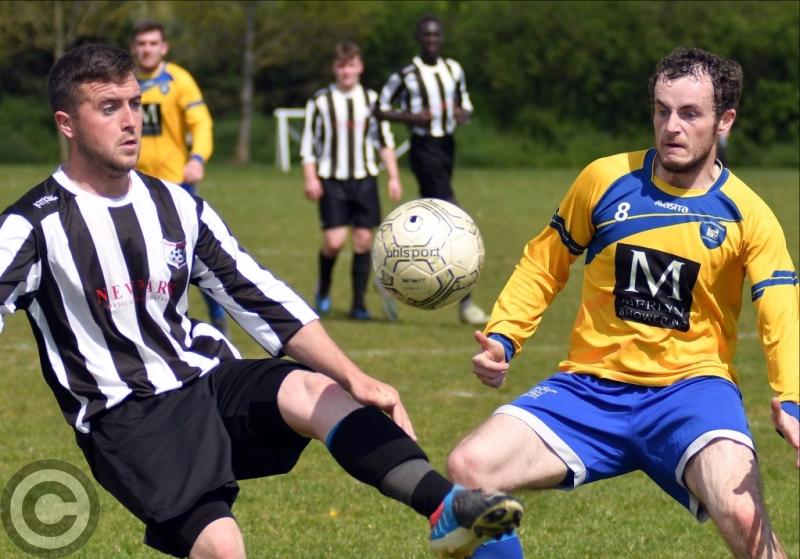 While the FAI Junior Cup may be their main aim at the minute Evergreen A kept their interest in other silverware alive and kicking.
The city side moved into the semi-finals of the McCalmont Cup as they hit Bridge United for six on Sunday.
Former Bridge player Sean Barcoe returned to haunt his old club with an early brace, while Mikey Drennan gave them a 3-0 cushion. Ben Hickey, Dean Cornally and Lee Delaney also got in on the act in the 6-1 win, the result proving pleasing for Packie Holden as the spread of scorers gives him more options ahead of Saturday’s big game with Sheriff YC.
It was a high-scoring morning too for Highview Athletic A as they beat Stoneyford United 5-1 in Harristown.
Athletic were quickly up and running, taking the lead with Seamie Kavanagh’s 10th minute strike, but they were hauled back by a Damien Raggett equaliser on the half hour.
The stalemate lasted into the second half, but the hosts took the lead again with a Dean Broaders goal on 50 minutes.
Surged In Front
They never looked back from there, surging further in front with Kavanagh’s second goal five minutes later. He completed his hat-trick five minutes from time, with Murty Broaders completing a good morning for the Division One title hopefuls with a fifth goal soon after.
Highview will now play reigning champions Thomastown United in the semi-finals on May 21. Evergreen A will face Deen Celtic A on the same day, with the ties pencilled in as a double-header to be played in Derdimus.
The race for more silverware gathered pace in another competition, with two of the Premier Division Cup semi-finalists known. There will be an all-city clash after Freebooters A and Evergreen B scored good wins on Sunday morning.
Freebooters showed they knew their way to goal as they put nine past Callan United A at the Fair Green on Sunday morning.
There were hat-tricks for Henry O’Neill (who also scored a treble in the first leg in Callan) and Emmet Nugent, with David Rice, Sam Watkins and Paddy Cahill also getting in on the act as they won 9-3 (13-4 on aggregate).
Evergreen B booked their place against their cross-town rivals when they beat Clover United twice in a week.
Following their 3-1 win in Rathdowney during the week they made sure of their semi-final berth when David Roche (2) and Mark Owens struck in a 3-2 win on the Kells Road on Sunday morning, completing a 6-3 aggregate win.
Dodged The Drop
In League action a draw wasn’t enough to keep Newpark in Division One after Thomastown United B grabbed a share of the spoils and dodged the drop on Sunday.
In a game where a win for either side would have kept them up at the expense of their opponent, the city side were caught practically on the line. One up thanks to a Trevor Kelly strike, Newpark thought they were in sight of a win when goalkeeper John Dumecz saved Eoin Delahunty’s penalty late on.
However, there was still time for a twist - United were awarded another spot kick in the dying seconds, Neil O’Mara hitting the net to earn the Grennan men a 1-1 draw.
The result brought bad news for the city side, who will now join Bridge United in Division Two next season.
Elsewhere Deen Celtic advanced in the Division One Cup without kicking a ball after they were given a walkover by Lions.