Eoin and Jack are ace pair in the alley 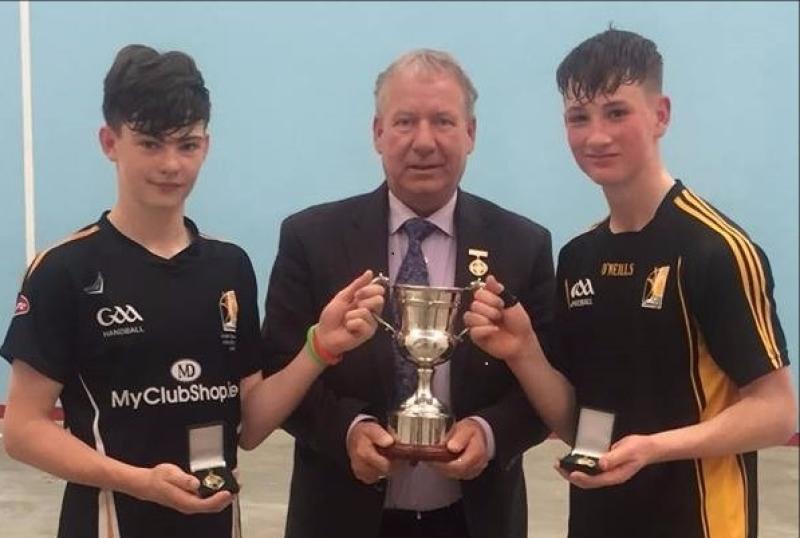 Kilkenny players enjoyed mixed results at the hugely competitive All-Ireland hardball doubles finals played at Mullingar and Thurles on Saturday.
In the minor doubles decider in Mullingar, Kilkenny took the spoils in a tough three set contest, and in Thurles, sadly it was defeat in the intermediate doubles match.
On Saturday, Eoin Brennan and Jack Doyle travelled to the midlands venue to play the All-Ireland minor doubles final against Mayo’s Patrick Murphy and Lorcan Conlon.
For Eoin this was an opportunity to retain the title as he successfully partnered Shane Dunne from Clogh in last year’s decider which also featured Murphy.
The Kells/Windgap pair qualified for the final with a semi-final win over fellow county pair, Cathal and Aidan Barry from Clogh, and they were confident of doing well and making a bold bid for honours.
Evenly split
The opening two games in the decider were evenly split.
Kilkenny won the first set 21-6 but Mayo levelled the tie when taking the second 21-8.
In the third and deciding game, the Kilkenny duo played the steadier and linked their plays well.
They closed out the match with a sure striking 21-14 win.
This was the eleventh time the title has been won by Kilkenny since registering their first success in 1954.
In the senior doubles decider, also played at the same venue, Meath’s Tom Sheridan and Brian Carroll recaptured the crown when defeating Dublin’s Eoin Kennedy and Carl Brown.
Strong tradition
In Thurles the All-Ireland intermediate doubles final featured Daniel and William Love from Clogh.
The North Kilkenny brothers were up against dynamic Cork duo, Michael Hedigan and Donnacha O’Dea.
Coming from a club that has a very strong tradition in promoting the oldest form of handball, Daniel and William were attempting to add their names to a very impressive honours list.
However, on this occasion they couldn't find their best form and they came off second best to the Munster duo, losing the final in two sets 21-8, 21-19.
Hal Clarke
As the 60x30 season gets ready to swing into action, the annual Hal Clarke tournament will take centre stage at the Kilfane court.
This very popular tournament has gone from strength to strength in recent years and has become a firm fixture on the handball calendar in Kilkenny.
It attracts players from almost all the clubs within the county, and it is viewed as the place to be in terms of getting top class action.
Tthe matches will be played over the next few weeks.
Events
With this weekend free of any handball fixtures involving Kilkenny players, the focus the following weekend will be on the annual GAA under-age festival of sport, Feile-na- nGael.
Featuring competitions in boys and girls 40x20 and 60x30 grades, this under-14 event will be hosted by Carlow and Wexford clubs this year.
On the weekend of June 17, 18 the Mount Talbots Wall Ball tournament will be played.
This will be followed two weeks later, on the weekend of June 30, July 2, by the Irish Wall Ball Nationals in Breaffy House, Mayo.
Entries are now being accepted for both these events.