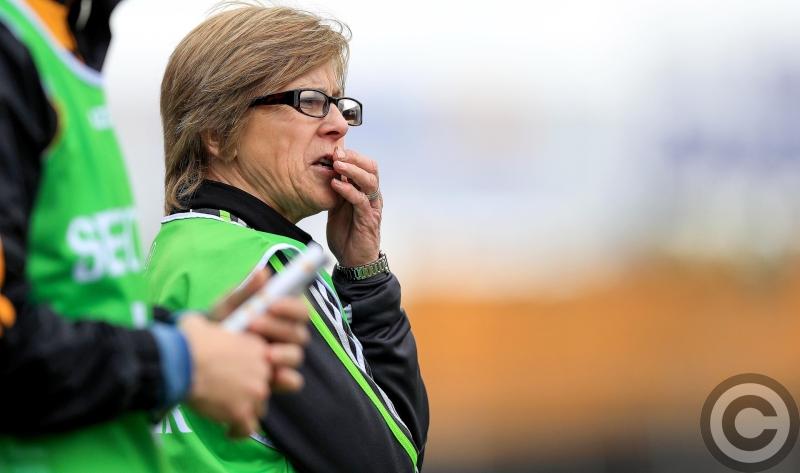 Kilkenny manager Ann Downey has her charges ticking over nicely

The Liberty Insurance All-Ireland senior camogie championship could well go down as being the most competitive ever. With the last round of games tomorrow, only Waterford of the 10 teams are out of contention.

Defending All-Ireland and National League champions, Kilkenny, are driving hard for another victory.

Last year’s runners-up Cork are the sole side with a 100% record and have secured a direct berth to the semi-final as clear winners of Group 2.

This is a riveting group however as apart from Paudie Murray’s crew getting the better of the other four teams, Wexford, Offaly, Limerick and Tipperary still have a chance of securing the two quarter-final spots for second and third, the latter still having hope despite yet to win a game.

There are numerous permutations and a very strong possibility that score difference will prove a determining factor for teams that are level on points. If that fails to separate them, the result of the game involving the two teams will decide.

What we do know is that a play-off will not be required as there has only been one draw in the entire series to date and while Clare and Kilkenny could conceivably finish deadlocked in Group 1, it would need the former to beat Galway comfortably, and the Cats to lose badly against Dublin.

Meanwhile, in Group 2, there is the possibility that Offaly, Limerick and Tipperary finish level with the final qualifying place up for grabs. They cannot finish level on score difference however..

Kilkenny are on top with seven points, with Galway and Dublin next on six and Clare in their slipstream in fourth. Waterford prop up the table after failing to garner any points. Clare play Galway in Cusack Park, while Kilkenny host Dublin at Tom Ryall Park (5.30pm).

Wins for Galway and Kilkenny will see the champions progress to the semi-finals, with Galway and Dublin going through to the quarters. Wins for Clare and Kilkenny would move the Bannerwomen into second and Dublin would miss out as they have a 44 point inferior score difference to Galway.

Cork are clear winners on 12 points, with Wexford second on 6, followed by Offaly and Limerick on three and Tipp with no points yet. However, there is very little between the four counties battling for the two quarter-final positions on score difference so it is all to play for as Wexford travel to Bruff to face Limerick, while St Brendan’s Park, Birr will house the intriguing Offaly-Tipp encounter.

If Wexford win, they are definitely through. However, were they to lose by six points or more and Offaly defeated Tipperary, the three teams would be equal and the Yellowbellies would lose out, even if level on score difference with Limerick, by virtue of the head-to-head.

Meanwhile, Offaly will be just as happy for Wexford to triumph as long as they get the better of Tipp, while any sort of win will do Limerick if Tipperary overturn Offaly.

And that could well happen as Tipp are not without hope themselves. They will want Wexford to account for Limerick and must then beat Offaly by three points or more. That would leave the bottom three sides level and the Brian Boyle’s charges edging it on score difference from the Faithful women.

Draws will not have any impact.