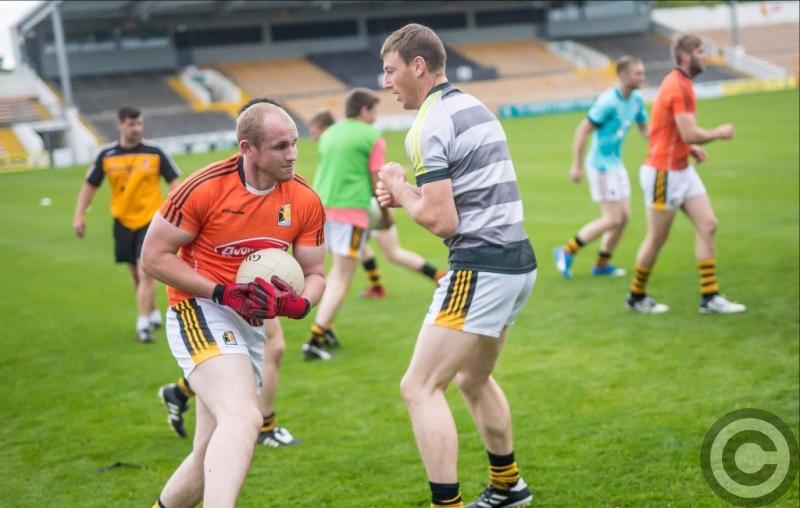 The Kilkenny junior footballers are up against it as they face Meath. Pic: Pat Moore

Hurling, and lo and behold, football will take centre stage for Kilkenny this weekend.

Tomorrow the often ridiculed footballers will be bidding to make history when they attempt to qualify for what would be the county’s first All-Ireland junior final.
And around 24 hours later the intermediate hurlers will be chasing gold in Pairc Ui Chaoimh when they play Cork in the All-Ireland final.
Meath stand between the Kilkenny footballers and a place in the All-Ireland final against either Kerry or Leitrim.
The Royal County will be visitors to Nowlan Park tomorrow (3pm) for what will be the Noresiders second All-Ireland semi-final in two years.
Kilkenny qualified for the All-Ireland junior football championship proper by virtue of their success in the ‘back door qualifiers’, the British junior championship.
“We face a huge task, but we have to believe we have a chance,” suggested Kilkenny manager, Christy Walsh.
“I would be confident the players will give a good account of themselves,” he added after insisting this squad was better than the one that won in Britain two years ago.
Meanwhile, the Cats will be bidding to do a smash and grab job against Cork on the Leeside in the intermediate hurling final on Sunday.
Kilkenny’s record in the final is far from good.
Of the 13 showdowns contested they won a mere four to leave them behind Cork (8) and Tipperary (7) in the Roll of Honour.
Only three counties - Kilkenny, Cork and Wexford - entered the championship this season and there is every chance it could be scrapped.
Kilkenny manager, Anthony McCormack has urged his charges to make their mark and go out with a bang.
“We have never won back to back titles,” he reminded.
“We have a chance to make a bit of history. If this championship is never to be played again, wouldn’t it be some way to leave it?”
As defending All-Ireland champions, Kilkenny enter the fray with a totally new squad.
“Lads know if they can perform at this level they can get noticed, and I think a few have their eye on bigger things,” the manager felt.