Maguire in Preston: He shoots first goal for new club 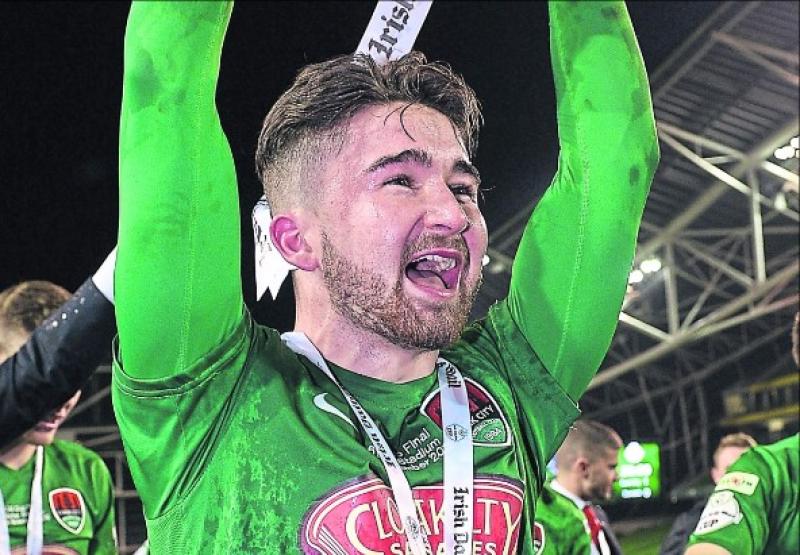 Scoring sensation Seanie Maguire is hoping his golden feet will shoot him into the green of Ireland.
The 23-year-old leaves Cork City as a record goal scorer.
His new destination is English Championship club, Preston North End.
First it is Preston, he insisted. Then the Republic of Ireland, he added.
The deadly striker started a new chapter in his career this week when he joined Preston, and he scored his first goal with the club last night in the 2-1 defeat against Burnley. Maguire has made no secret of the fact he wants to play at the top level with Ireland.
“Ever since I was a kid I’ve wanted to represent my country,” he insisted in an exclusive interview with the ’People. “That’s something anyone who’s mad about football dreams about.”
Red-hot form with League of Ireland pacesetters Cork City led to calls for Irish manager, Martin O’Neill to include Maguire, who bagged 20 league goals as well as a hat-trick in the Europa League, in his most recent Republic of Ireland squads.
O’Neill has yet to make the call, but he admitted during the week he is well aware of the Kilkenny man’s hot, hot form and that Maguire could feature in his future plans.
“We’ve had our eye on Maguire,” O’Neill revealed when in Kilkenny to take part in the FAI Cup draw. “I saw him in the FAI Cup final last year, which wasn’t his best game, but his recent performance against Dundalk was impressive, especially when he got in the box.
“He has an opportunity now in England and he will be looking to progress with his new club,” added O’Neill. “If he can do that, then surely more things will follow.”
Maguire echoed that statement, stressing his desire to make an impression at his new club.
“Hopefully I will get the chance to put that Irish jersey on somewhere down the line,” he said, “but my main focus in the short term is to do well at Preston.
“I want to make a good impression, to show the club that I’m good enough. I want to get into the team. I want to score goals. I want to show the Preston manager (Alex Neil) what I can do.
“Then I’ll look at the long term, and finally getting that call-up,” he said. “It’s then I’ll be able to show the Irish manager and his staff that I can make the step up to international level.”
One thing is for certain - Maguire is confident he will make it.
“There’s no doubt in my mind that I will eventually get there,” he said. “Since I scored the winner in the FAI Cup final (2016) I feel that I’ve improved every single week.
“I’ve made that step now to a higher level in England. Now I want to step it up again and improve my game even further.”