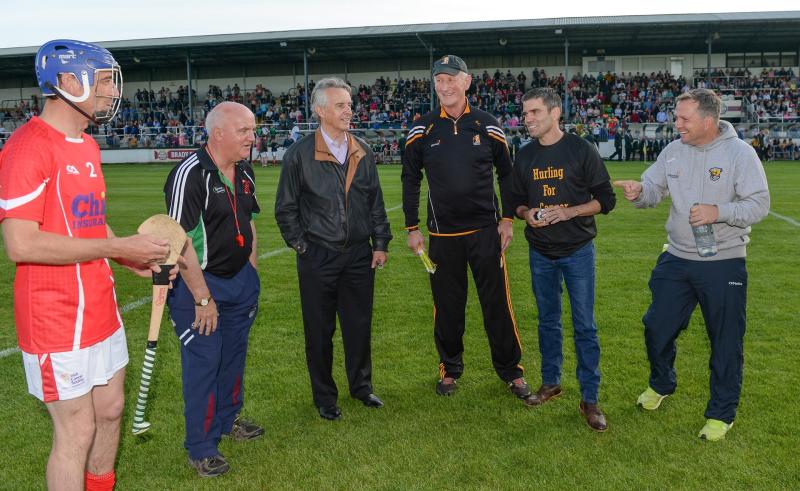 A record crowd of almost 4,000 descended on St. Conleth’s Park, Newbridge, for the sixth running of the Hurling for Cancer Research in aid of the Irish Cancer Society.

Jim Bolger’s Stars, managed by Liam Griffin and ably assisted by Clare legend, Davy Fitzgerald, made a quick start and points from TJ Reid, James Dowling and Charlie Carter put them into an early lead.

The first of the goals also went the way of Jim Bolger’s Stars, Charlie Carter, hitting the net after some good work from ex Ireland Soccer International, Stephen Hunt.

Fitzhenry would be involved shortly after when he was on hand to save a well-struck penalty from Limerick sharp shooter, Shane Dowling, showing he still has the shot stopping skills that helped Wexford win an All-Ireland in 1996.

The goals started to flow just before half time and Wexford’s Conor McDonald got the first of his three goals with a good finish from the end line at the dressing room end.

Shane Dowling hit the net soon after for Davy Russell’s Best and at the other end Camogie star, Ursula Jacob dispatched a penalty past jockey, Ian McCarthy, to leave Jim Bolger’s Stars a point ahead at the break.

Davy Russell ’s Best, fired up by Brian Cody’s half time team talk, stormed out of the blocks in the second half and goals from David Fogarty and Conor McDonald saw them take the lead.

The goals continued to come thick and fast and the little man from Killeagh Co. Cork, Joe Deane, latched onto a John Mulhall pass to goal for Jim Bolger’s Stars.

The goal of the game came next though. Stephen Hunt, who showed in the first half that he was well able to mix it on the hurling field, controlled a dropping ball and without taking the ball in his hand fired to the roof of the net with his next touch. A goal that wouldn’t look out of place in Croke Park on the first Sunday in September.

Conor McDonald rattled the net once again midway through the second half, before his teammate on the night and Wexford teammate Lee Chin, who did untold damage from start to finish, fired to the net to edge Davy Russell’s Best back in front.

The game was then decided in a matter of minutes. Naas man Eoin O’Hehir was at the end of a delightful TJ Reid pass to fire Jim Bolger’s Stars back in front before O’Hehir found Joe Deane who grabbed his second goal of the game.

Lee Chin notched his second goal of the evening late on but it wasn’t enough to get back on terms with Jim Bolger’s Stars, despite the best efforts of legendary commentator, Mícheál Ó Muircheartaigh’s to convince referee’s Jimmy Barry Murphy and Cyril Farrell to arrange an honourable draw.