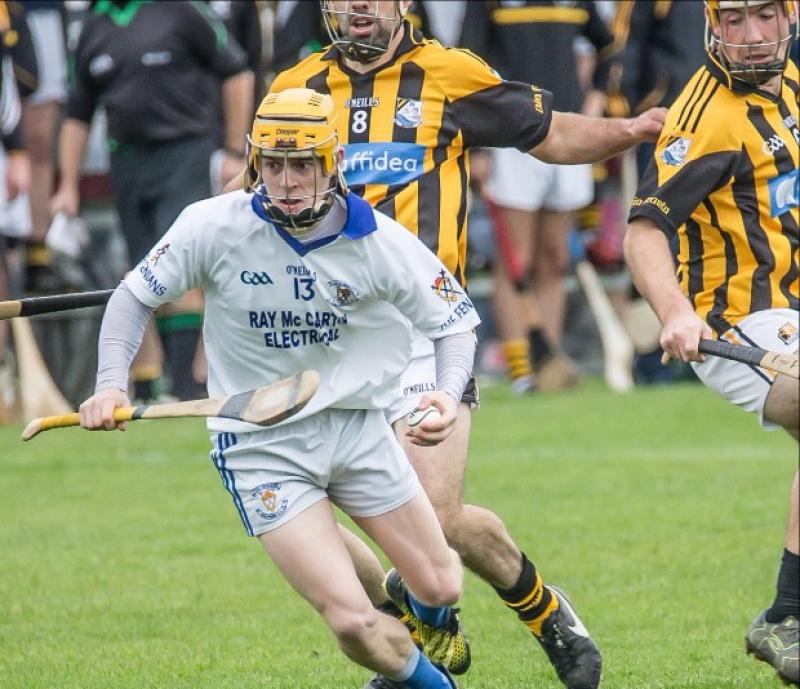 Fiercely committed Fenians (Johnstown), who were missing four first team players who are attending a wedding in the US, pulled off a hugely important victory over high flying Glenmore in the intermediate hurling league in Pairc Sheamuis Stiophan this evening.
Victory shot Fenians out of the relegation zone although they finished level on points with Graigue-Ballycallan. However, in the head-to-head the Fenians got the advantage, having beaten Graigue in round one (2-13 to 1-10).
Fenians now go into the first round championship draw proper, while Graigue and Dunnamaggin play first round/relegation matches as they filled the two last places in Group A.
A great take of 12 points by Mark Webster was invaluable as Fenians, who were relegated from the senior grade last season, fought tooth and nail from the throw-in.
Glenmore chased hard all the way, but they paid the price for missing five chances in-a-row at the finish when chasing the equaliser. Defeat cost them a place in the League final, and they now qualify for the Shield decider, which is contested by the runners-up in each group.
Fenians tore into every tackle from the off. After Alan Murphy (G) and Mark Webster (F) traded early points, Webster pointed the winners in front in the third minute.
The deadly Webster added six more points before the break to leave Fenians 0-10 to 0-7 in front at half-way.
Glenmore opened the new half with points from the fine striking Eoin and Alan Murphy, and when the latter got through for a goal in the 36th minute they jumped in front for the first time (1-10 to 0-12) since the same player registered the opening score.
Fenians continued to drive forward, and when David Ryan touched a long delivery from a John Henderson free to the net from the edge of the square in the 45th minute they were back in front. When Webster converted another free within a minute their lead shot up to 1-14 to 1-11 and they were flying.
Back stormed Glenmore. Alan Murphy and Liam Hennessy puts score together but when Mark Websgter and Alan Murphy swopped minors afterwards it left Fenians 1-15 to 1-14 in front with eight minutes remaining.
During that time Glenmore drove five wides, and they also threw away a great chance when awarded a free almost in front of goal. However, after a clash between players the free was scrubbed and the referee threw-in the ball instead.
The losers were without former All-Star, Ger Aylward, who is still nursing a shoulder injury.
SCORERS: Fenians - Mark Webster (0-12, 11 frees); Willie Brennan (0-3); David Ryan (1-0). Glenmore - alan Murphy (1-6, five points frees); Eoin Murphy (0-4); Shane Doherty, Emmett Vereker, Mark Aylward, Liam Hennessy (0-1 each).
Results Group A
Fenians 1-15, Glenemore 1-14
Tullogher Rosbercon 0-20, Graigue-Ballycallan 2-13
Tullaroan 0-21, Dunnamaggin 0-15
Finishing places in Group A
1 Tullroan 8 pts (in League final)
2 Glenmore 6 pts (in Shield final)
3 Tullogher Rosbercon 5 pts (first round)
4 Fenians 4 pts (first round)
5 Graigue-Ballycallan 4 pts(first round/relegation semi-final)
6 Dunnamaggin 3 pts (first round/relegation semi-final).
Results Group B
Mooncoin 4-16, St Lachtain's 1-15
Thomastown 2-19, Lisdownjey 1-18
Young Irelands v St Patrick's in Canon Kearns Park on Thursday (6.45pm).
Current standings in Group B
1 Thomastown 8pts
2 Young Irelands 6pts (game to play)
3 St Patrick's 5pts (game to play)
4 Lisdowney 4pts
5 Mooncoin 3pts
St Lachtain's 2pts