Soccer: Kilkenny striker Brennan gets call-up to Republic of Ireland under-17 squad 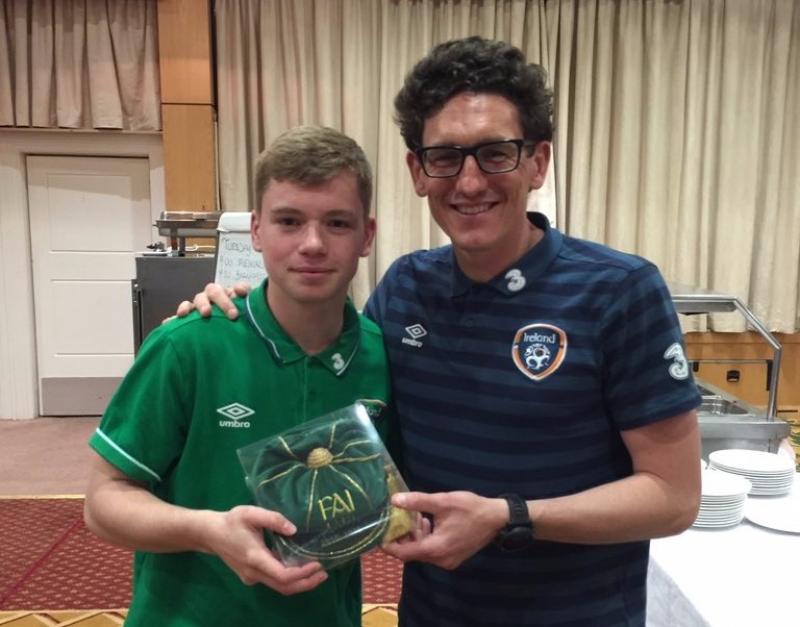 Kilkenny's Ciaran Brennan, seen here being presented with his Ireland cap by Keith Andrews, has been called up to play Macedonia in two under-17 friendlies

Kilkenny's Ciaran Brennan will don the green of Ireland again after being called up to the national under-17 squad.

The Bennettsbridge native, who is currently playing with Waterford FC, has been named in Colin O’Brien's squad for the forthcoming friendlies against FYR Macedonia.

The Boys In Green will begin their preparations for this season’s UEFA Under-17 Championships qualifiers with two testing games in Skopje on Friday and Sunday.

O’Brien’s side have a testing UEFA Under-17 Qualifying Round group as they travel to Bulgaria with the Ukraine and Azerbaijan also in Group 11. England will host the 2018 UEFA Under-17 European Championships Finals next May.

“Although we’ve had a handful of players ruled out through injuries we’re pleased with the squad we’ll be working with this week,” said O’Brien.

“During the summer we held a training camp and an assessment day in August as we’ve tried to look at a number of players. We felt it was important to see who could come into the equation.

“Everything we’re working on is built towards the qualifiers in October so this week we’ll work on the four functions of the game and will want to get two good performances on the pitch.”

Temperatures will top 30C in Skopje this week so O’Brien is interested to see how his players cope with those conditions.

“They will be testing conditions for the players due to the very hot climate in Macedonia and that could be helpful in preparation for Bulgaria in October when it will still be warm,” he said.

“In conditions like this players can learn how to play in heat and deal with opposition that can sit deep at times and mix things up with their approach so these games will be very beneficial to the players’ learning.

”Some of the players played a year up last year so we hope they've learned a lot from that experience and have an understanding of what's coming physically and mentally at this level,” added O’Brien.

“That experience can prove helpful to the whole squad but firstly they must also be aware of the need to ensure that their own performances on an individual level are up to what is required.”