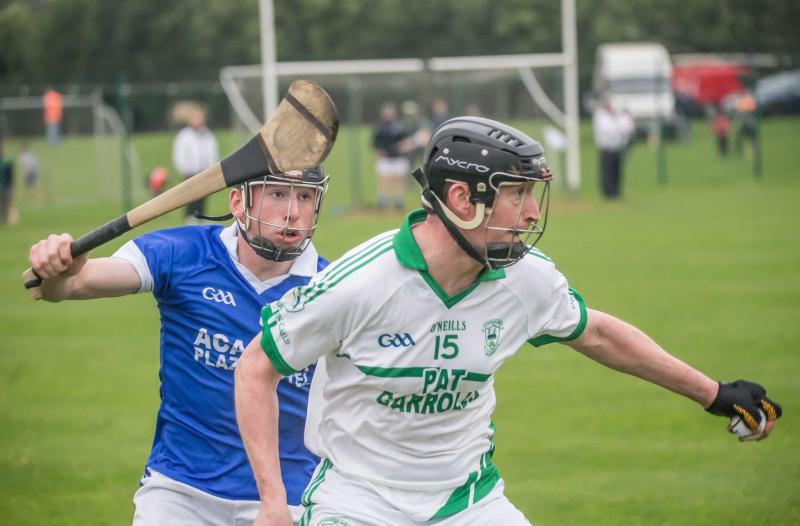 Martin Comerford (O'Loughlin Gaels) gets away from Conor Delaney (Erin's Own) during their SHL clash. The sides meet in the championship on Saturday

Erin’s Own jumped into the season and opened with three wins on the bounce, but then stumbled.

Initially they drew a fourth round league match against Carrickshock, but then O’Loughlin’s beat them by 1-16 to 0-17. They recovered their step by shooting down Danesfort in the first round of the championship, suggesting in the process that they had regained their mojo.

There has been a lot to like about their hurling, especially the play of Conor Fogarty and Conor Delaney, who could easily end up as buddies in the Kilkenny defence next season.

An ever-improving Sean Buggy has been a big player for them up front, while Peter Donovan, Michael Murphy and Aidan Moran have all been to the fore in what has to be classed as a Castlecomer revival this season.

They never won the senior championship, and it is unlikely they will do so this season, but no one should write them off here.
Erin’s Own are looking for what we call ‘that day’ performance.

O’Loughlin’s shot themselves in the foot by registering 14 wides against Dicksboro in the League final. No team can do that and expect to win.

Stung by that disappointment, O’Loughlin’s should be better this time.

It was at this stage last year when they beat James Stephens that O’Loughlin’s announced themselves as deadly serious contenders, with that great warrior Martin Comerford the heartbeat of the team.

Not much has changed since. The Gaels had a well-structured and planned route through the season. Now they are getting ready to cash in their chips.