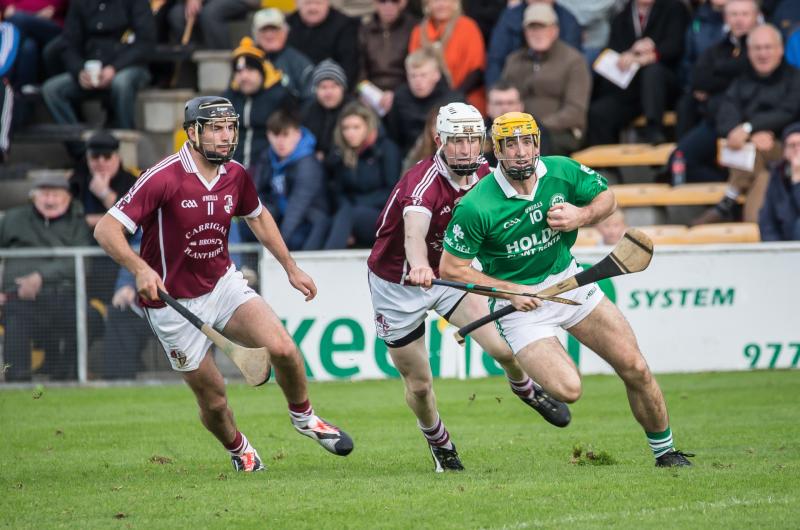 This game, the second leg of a double bill in Nowlan Park on Saturday, is a repeat of the 2014 county final. In terms of life, and hurling life in particularly, that is a long time ago.

To be brutally honest, neither are the side they were then. But so what? That was then.

This is now, the 2017 championship which presents a whole raft of different challenges in a totally different environment.
Both have been crucified by injuries all season, and neither has a clean bill of health at the moment.

Young defender, Patrick Mullen, damaged the cruciate against the Rower-Inistioge recently, so he faces a long lay-off too after surgery.

Better news was Michael Fennelly returned for Shamrocks against the Rower, although he wasn’t due to start. The reason he was sidelined was a knee injury (floating cartilage), not the Achilles tendon that shortened his inter-county season.

He took on a less demanding role than normal, playing on the full-forward line. He looked woefully short of match practice.
Henry Shefflin wasn’t even togged out that day. However, he hasn’t given up hope of maybe playing some part in the championship. With very little hurling behind him, maybe has to be the operative word.

But then again, Eddie Brennan stepped in for Graigue-Ballycallan last weekend after a 12 month break and made a big contribution. It can be done!

Clara looked a very ordinary outfit in the first half of the Shield final against Carrickshock. Lester Ryan opened at centre-back. When Shane Prendergast moved to No. 6 after the break and Ryan went to midfield things looked better, but the attack appeared lame, apart from the speedy Chris Bolger.

Jack Langton laboured honestly and absolutely at centre-forward, but he didn’t exert the influence he often can on matches. We can’t say Clara are a work in progress, not after all the success they enjoyed over the past five years or so.

The spark just hasn’t been in Clara’s play. The same could be said of Shamrocks, but since they stormed back from an eight point deficit to draw with Danesfort in round four of the league things have improved for them.

They have beaten Bennettsbridge and the Rower since. Against the Rower, for example, former county captain, Joey Holden, looked to be getting his best game back together again. There were other promising things, like the form of Richie Reid at centre-back and the dash of Colin Fennelly in attack.

Clara lost two of their last three games, against Dicksboro and Carrickshock, but they beat James Stephens before that.
On the premise that Shamrocks can squeeze more from their returning and second tier players, they get the nod.