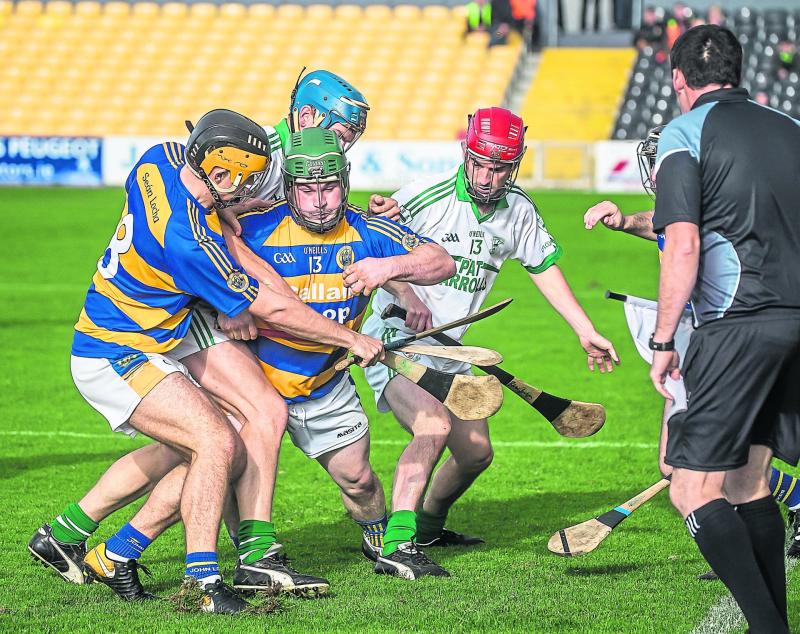 A cleverly taken point almost on 62 minutes by John Lockes (Callan) top scorer, James Power earned them a thrilling win over O'Loughlin Gaels in a high class Kilkenny junior hurling final at Nowlan Park today.
Power was put through on the town end goal by sub, Conor Murphy, and with two defenders chasing him at close quarters he shortened the grip on the hurley and lofted by ball over the bar for the winning score.
It was a terrific finish to a terrific games that had fans on the edge of their seats most of the way. In all the scores were level 12 times before John Lockes sneaked through for what was their fifth junior success.
After six points were equally shared during the opening 10 minutes, O'Loughlin's got the upper-hand. With free taker, John Doyle converting every chance that came his way they opened out a 0-8 to 0-3 lead by the 17th minute.
A goal for John Lockes by Dan McCormack in the 18th minute revived them. Three times subsequently the scores were level before two late points from Power, against one reply from Doyle, left the winners 1-9 to 0-11 in front at the break.
O'Loughlin's squared it early in the new half when John Doyle punished a foul on Daniel O'Connor. The scene was set for a close, even second half during which the scores were to be level five more times.
O'Loughlin's looked to have earned a second chance when Doyle drew the scores at 1-16 to 0-19 on 58 minutes. The defending was dogged from both sides after that, but with the last whistle nearing Power got a chance, and he took it well to decide a thriller.
SCORERS: John Lockes - James Power (0-10); Dan McCormack (1-2); Shane Bergin (0-2); Paddy Kennedy, Ryan Bergin, Conor Murphy (0-1 each). O'Loughlin Gaels - John Doyle (0-13); Alan Geoghegan, Danny Lenihan (0-2 each); Niall Bergin, Brian Dowling (0-1 each).