Kilkenny handball: The titles roll in 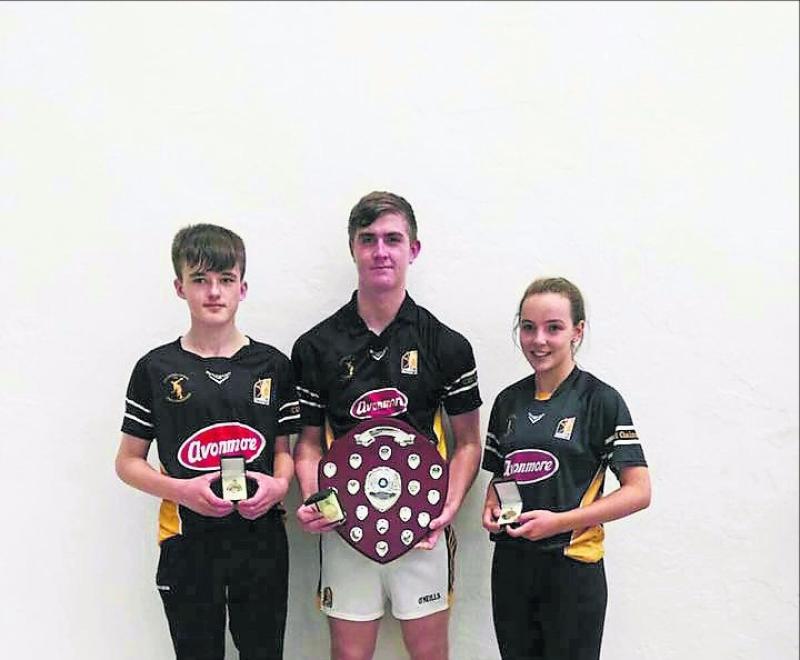 As the 60x30 season draws to a close, there was success aplenty for Kilkenny juvenile handballers in Garryhill on Sunday where they won three All-Ireland titles.
In what was a very competitive championship, Kilkenny players travelled to the Carlow venue to compete in four national deciders.
In the girls under-14 singles, Amy Brennan from Clogh produced a fantastic display, beating Tyrone’s Cloda Nic Con Midhe 15-6, 15-8 to secure her first All-Ireland title.
This was some performance by a determined and skilful player, who can go places in the game.
Hot favourite
In the boys under-14 singles final, Billy Drennan was hot favourite to add another All-Ireland to his ever growing collection of national crowns.
Having won the 40x20 crown earlier in the year, the Galmoy player eased to another All-Ireland success when defeating Tipperary’s Rory Grace in two games, 15-6, 15-5.
To complete a good day for Kilkenny in Garryhill, Jack Holden from Kilfane scored a comprehensive victory over his Cork opponent in two games.
In control from early in the match, Jack displayed all the skills of handball as he defeated Dara Ducey from Cork in two sets, 21-3, 21-4.
In the girls under-16 doubles, the Kilfane/Mothel pair of Roisin O’Keeffe and Noelle Dowling were defeated by the impressive Tyrone pair of Caitlin Conway/Elizabeth McGarvey in two games, 21-13, 21-11.
Teams
This Saturday at Kilfane the curtain will come down on the juvenile 60x30 season when the All-Ireland team events will be completed.
Over the last couple of seasons Kilkenny enjoyed a great record in these competitions.
This weekend they will be hope to keep the good run going as they contest the two finals in the under-12/13 and under-16/17 grades.
The under-12/13 will play either Cork or Monaghan in the final and in the under-16/17 decider Kilkenny play Waterford.
The Kilkenny teams are: under-12/13 - Kyle Jordan, Ronan O’Brien, Harry Delaney, David Holden, Conor Holden, Michael Brennan.
Under-16/17 - Conor Drennan, Tom Carroll, James Love, Kieran O’Neill.
Fixtures
Saturday in Kilfane, Kilkenny (11am) boys under-12/13 60x30 Team of 6 semi-final 1 Cork (Cameron O’Sullivan, Cian Cronin O’Neill, Ben Sullivan, Hayden Supple, John Cronin, Eoin Daly, Darragh Henley) v Monaghan (Aidan Cunningham, Aidan McGeough, Fergal Magee, Diarmuid O’Riordan, Matas Sadauskas, Oisin McKeown)
Semi-final 2 - Kilkenny (Kyle Jordan, Ronan O'Brien, Harry Delaney, David Holden, Conor Holden, Michael Brennan) bye
The final will be played at 2pm.
Semi-final 1 winners v Kilkenny (Kyle Jordan, Ronan O'Brien, Harry Delaney, David Holden, Conor Holden, Michael Brennan)
Boys under-16/17 60x30 Team of 4 final (12.30pm).
Kilkenny (Conor Drennan, Tom Carroll, James Love, Kieran O'Neill) v Waterford (Jake Moore, Rury Cusack, Daniel Treen, Aidan Organ).