Kilkenny athletics: It was a good day in Abbotstown 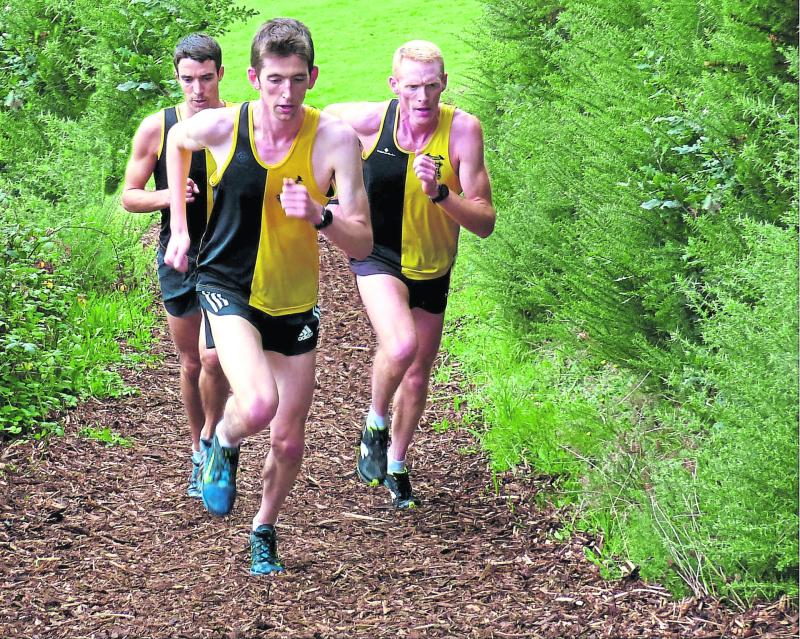 With Hurricane Ophelia somewhere in the Arctic and Storm Brian expelled from our shores, Kilkenny athletes broke free from the weather shackles as they performed with excellence in the Athletics Ireland Autumn open cross-country in Abbotstown last Sunday.
Abbottstown, the national cross-country course that was opened last year, is an excellent facility, featuring a mix of woodland, open field, and rolling hills.
It is a course favoured by most athletes – including Kilkenny participants.
The ladies were represented by Lauren Dermody (Castlecomer AC) in the senior women’s event.
Lauren, who is getting stronger and faster with each race, took her performances up a notch on Sunday, finishing in a fantastic 19th place. This is Lauren’s first year out of the Junior category and her 19th place is very creditable indeed.
In the women’s Masters event Adele Walsh (St Senan’s) finished second in the female over-40 section and fifth overall in the women’s Masters category.
It was a great performance for Adele, one which will surely earn her a place on the Irish team for the Home Countries Masters International.
The race was won by Claire McCarthy of Leevale, who represented Ireland at the World Championships Marathon this year, an indicator of the class of field that Adele was included in.
In the senior men’s event the county was represented by the Kilkenny City Harriers (KCH) quartet of Eoin Everard, Thos Hayes, Brian Maher and Tom O’Keeffe.
From the outset the Kilkenny team stuck close together, with Eoin forging ahead in the latter stages to finish in eighth place - his best cross-country run yet.
Elsewhere there was a change in fortunes as Brian Maher was beaten by Thos Hayes. Having outsprinted Thos in a terrific county senior finish in Kilmacow earlier in the month Brian had to settle for 15th place this time, with Thos taking 13th overall.
The youngest member of the squad Tom O’Keeffe - he was recently crowned county novice champion - was 18th.
This race was won by Hiko Tonasa of Dundrum South Dublin with Gideon Kipsang Kimosop of Kenya in second place. These boys will be in action again in three weeks’ time when the Leinster senior cross-country championships are held in Adamstown.
JUVENILES
Next weekend sees the attention switch to juvenile athletics as the Leinster juvenile even age group and novice championships are held in Navan.
Kilkenny has a reputation of being a strong cross-country county, both at provincial and national levels.
With several previous Leinster and All-Ireland winners and podium finishers in the squad, the county is looking forward to an exciting championships.
The girls’ under-12 squad consists of last year’s national silver medal-winning club team from St Senan’s along with the vastly improved Orlaith Kirwan from Thomastown, Sarah Kehoe from Gowran and Grace Glennon from St Joseph’s.
The boys will benefit from the inclusion of Dara Coverdale (Thomastown AC), Rory McEvoy (KCH) and the St Senan’s trio of Eoin Aylward, Issac Carew and Shane Morrissey in their ranks. Along with Gowran’s Aaron Doyle this looks like being a strong team.
The under-14 girls’ team has national champion Fiona Dillon and fourth-placed Hannah Kehoe on their books. With backing from Thomastown, KCH and St Senan’s athletes this team must surely feature in the medals.
The boys, on the other hand, will benefit from improved performances from Billy Coogan (Gowran), David Williams (St Senan’s), Tom Lodge (KCH) and Tadgh Connolly (St Senan’s).
These four, along with Ethan Butler (St Senan’s) and Billy Power of Thomastown, will be looking to bring the team a step up on the podium from their third place last year.
The girls’ under-16 team will be looking for a return to racing from Aine Kirwan of Thomastown, who has recently been sidelined with a calf injury. Along with the vastly improved Tara Ramasawmy of St Senan’s, these two should pull the county into a medal position.
The boys have last year’s under-14 winner Will Fox of Castlecomer leading the county contingent. Although Will is still an under-15 athlete his presence will be felt well up the Leinster field.
With some recently good performances from additional county members, it is hoped that Kilkenny will see an improvement on last year’s fifth place finish.
The under-18s will rely on KCH in both the girls and boys to make up the majority of both teams, along with an injection of talent from Thomastown, St Senan’s, Gowran and Castlecomer.
Annie McEvoy should run a good race here, based on recent form, with her twin brother Shay and club-mate Adam Fitzpatrick likely to feature in the leading pack.
It promises to be a good weekend, with some solid performances from the strong pool of talent rising through the county.