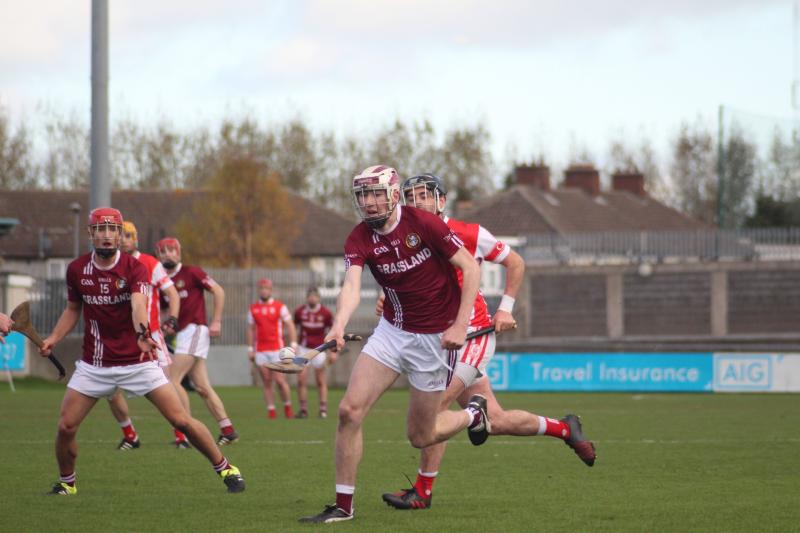 Action from the Dicksboro versus Cuala game

No complaints! The better team won.
That was the tell it as it was story from disappointed if proud Dicksboro manager, Mark Dowling, after the Kilkenny champions had their 10 match unbeaten run halted and they were outplayed by All-Ireland champions, Cuala in the Leinster club championship clash in Parnell Park (2-20 to 1-16).
“That was a good learning experience. That was tough,” was the summary from Dowling after strong running, physically powerful and good hurling Cuala out-gunned the visitors.
“Cuala are further down the road than us in their development physically, and experience has made them more savvy too. They were a bit more clinical with their chances when they got them.
“They more or less closed up shop in the second half and we couldn’t break them down. That is not an excuse. It is a fact.”
The former Dicksboro player said he was comfortable going in at half-time when his side were five points down (1-10 to 0-8).
“I thought we would have a real cut at it in the second half, but it was hard to get through them,” he conceded. “They have perfected the game they play. It seems like they have a lot of gym work behind them.
“The size of their players was a noticeable difference. We put a bit emphasis this year on strength and conditioning and getting lads stronger.
“It is probably a cumulative thing. It takes years to get to the level Cuala are at.
“I am sure Cuala were not at the level they are at now in year one. Look, this is all a huge learning curve for our squad. Cuala have fantastic hurlers all over the pitch.
“We will take this experience on board. The aim now is to defend the Kilkenny championship next year. Who knows, we might earn another crack at this then.”
The players, the manager insisted, can be proud of their achievements this season.
They learned an awful lot. They put together a 10 game unbeaten run. The league/championship double was completed in Kilkenny.
“It was a great year for us on the local front,” Dowling insisted.
“I think we had something like seven or eight championship starters the day of the quarter-final against Mullinavat. That was a big learning curve for them.
“Four matches later they had won out in Kilkenny.
“That was a huge achievement for the players. It is another big step in Leinster, irrespective of who you are playing. Obviously today we were up against experienced and class opposition.
“Our lads are young. They will learn from this. There was no problem with the quick turn over of games or anything like that. We were beaten by a better of team, it’s as simple as that.”
He insisted the players shouldn’t be down after the defeat. They should remember what they achieved in Kilkenny.
“You take things from this experience and see how much better you can get next season,” was the way he framed the picture going forward.
Cuala manager, Mattie Kenny, described their effort as “a fine win, and fine performance. It was a good game of hurling.”
Dicksboro had a lot of pace, he felt.
“They are a good young side,” he offered. “I think they will be around for a while.
“I was in Kilkenny at the county final and I looked at the age profile of Dicksboro. They are about three years on average younger than us. That bit of experience was crucial.”
He reminded that Cuala had the wind at the start and they got a bit of a lead. They would have liked to be more ahead at the break, but it didn’t happen and they knew the second half would be difficult.
“When Dicksboro came chasing scores that opened up a bit more space for us to attack into the breeze,” he explained.
“The second goal was critical. It gave us a good lead.”
When asked about the sort of gym work and training Cuala do, he replied that they had an athletic bunch of players.
This year they did a lot of strength and conditioning work and less hurling, less training.
“It was a long, long year last year and we made a conscious decision not to over train,” he said in reference to last year’s All-Ireland club success. “The thinking was to try to stay fresh. Freshness is key.”
Was there pressure defending the title, we wondered?
“We don't think about it,” Kenny continued.
“We just take on each game as it comes. That is all you can do. You can't be looking behind at what you achieved, or ahead.
“The players have matured since last year. We have won our third county title now. The players are three years older than when we started off. They are all in their mid-twenties, 26/27.
“This was a pleasing start for us. Every game is different. Every game is a challenge. You take them one at a time. St Martin’s are next up and that will be a huge challenge, but the heads are up now.”