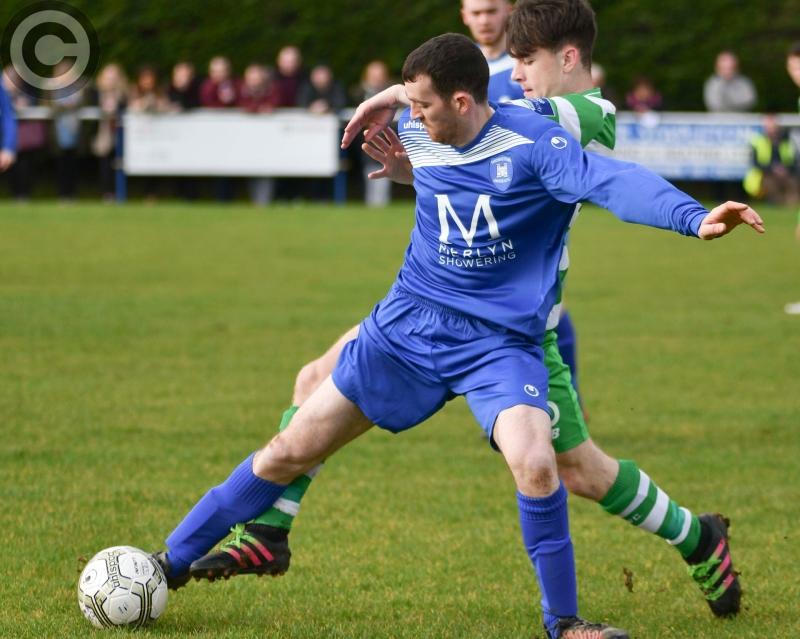 Mick O'Neill was on target for Thomastown United but they couldn't reel in Birr Town in their FAI Junior Cup fourth round clash PICTURE: MICHAEL BROPHY

One through, one out and one waiting in the wings – that was the tale of the FAI Junior Cup as the fourth round games saw some mixed results for the last Kilkenny & District League teams left standing.

Evergreen are safely through to the fifth round, but not before getting a tough test from Naas. Last year’s beaten finalists had to show their mettle, fighting back from a goal down on a tough surface, but Gary Maher’s side did enough to put their name in the hat for the next round.

They didn’t have the easiest of starts, falling behind inside five minutes but the visitors posted the perfect reply, Decky McQuillan quickly levelling matters with his second goal in as many games following some good work from Mikey Drennan.

They had goalkeeper Philly Johnston to thank for keeping them on level terms at the break; the netminder made a fine save to prevent Naas from going back in front with a first half penalty, Johnston guessing right when diving low to his left to beat the ball to safety.

That save, and the half-time break, served to clear Evergreen heads. They hit top form in the second half, and quickly, firing home two swift goals to take control of the game. Drennan grabbed the second when he coolly converted a spot-kick, before skipper Niall Andrews hammered home a third to give the visitors an advantage they would not lose.

It wasn’t such a good day for Thomastown United, whose depleted side crashed out 3-2 away to Birr Town. It was a first half to forget for United, who found themselves 3-0 behind inside the first half hour.

United, who were missing Stevie Connolly, Derek Brennan, Robert Skehan and Sean Brennan, faced an uphill task in the second half. They began to get at Birr – they had given their hosts too much time on the ball in the first half – and fought hard to get back into the game.

The tactic looked like it was working when Mick O’Neill pulled a goal back on the hour, then Martin Murray finished a goalmouth scramble with 10 minutes to play. That set the scene for a late charge, but Birr held on to KO their Kilkenny rivals.

One other local side may still end up in round five. Highview Athletic can join Evergreen on the road to the Aviva if they beat New Ross Celtic in their outstanding game.

Highview, who beat Rathangan 5-1 in their rescheduled round three game on Sunday, are away to New Ross, who beat Castlewarren Celtic in their last Cup game.

The draw for the fifth round of the FAI Junior Cup has been made. Evergreen have a home tie against either South William Street Celtic from the United Churches League or Kilnamanagh of the Leinster Senior League. Highview's path isn't as clear. Should they come through their backdated fourth round clash with New Ross they will face an away trip to Tipperary against Clodiagh Rovers (North Tipp), St Michael's (South Tipp) or BT Harps (North Tipp).

In the local leagues Freebooters B earned their second win in a row in Division One when they saw off Stoneyford United 3-2 on Sunday.

The young Blues were determined to help themselves to all three points and took a 2-0 lead thanks to goals from Sean Bolger and Alex Conway.

However, Stoneyford were equally as determined to get the win, and pulled their hosts back with a goal either side of half-time from Pat Dalton and Shane Murphy. It looked like they would get a share of the spoils, but Shane Maher’s goal four minutes from time kept all the points on the Fair Green.

The result means Stoney’ are still looking for their first point following last week’s loss to Fort Rangers, their first league game of the season.

It was a good weekend for the younger players of the Freebooters brigade after their Youths’ team beat Gorey Rangers 2-0 in the FAI Youths’ Cup on Saturday (Divine Amaukwa and Jamie Holden were on target).

The only other Division One game between Fort Rangers and Clover United fell victim to the weather, as the Wallslough pitch was deemed unplayable following heavy overnight rain.

While Spa United had a 3-0 win over Paulstown 06 to celebrate, Bridge United maintained their grip on the summit of the Division Two table with a big win in Ballyragget.

United made it six wins from six when they put five past Brookville on Sunday morning.

Eoin Kavanagh’s hat-trick sent them on their way to victory, while Chris Kavanagh and Bill Lawlor completed the scoring, something Bridge have done plenty of this season – they’ve netted 32 goals in six league games. They’ve also been miserly at the back, conceding just four. They are now five points clear of their nearest rivals Spa, and eight ahead of third-placed Newpark, with all three on six games apiece.

The gap is anything but as big in Division Three, where a single point separates the top two. Freshford Town handed East End United their first loss of the campaign when they struck for a late 2-0 win in Bennettsbridge.

Two goals in the last 15 minutes from Jonathan Doheny and Jimmy Meagher spelled success for Freshford, who have now won four leagues on the trot – a huge improvement following two back-to-back losses in their opening games.

It was a wretched blow for the league leaders, who had been doing well until they lost defender Glen Killian to injury deep into the second half, joining Pat O’Neill, Tommy Jordan and Brian Lannon on the injury list.