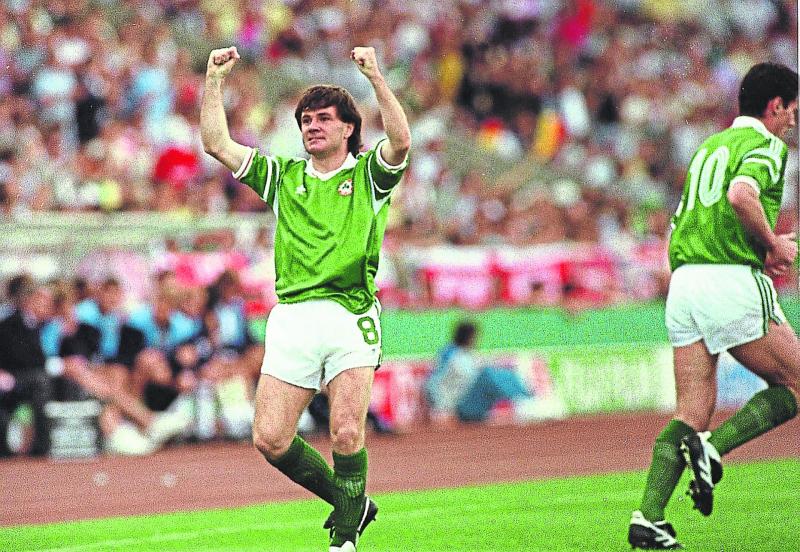 Ray Houghton celebrates after scoring that famous goal against England

You may recall a mention here last week of green jerseys and long afternoons on foreign soil. Ireland versus Egypt in Palermo. Ireland versus Romania in Genoa. Zzzz.
Those were long afternoons because of the boredom. But that era also included an afternoon that was long – interminably long – for an entirely different reason. It was all too full of action of the most nailbiting, nerve-shredding kind. Ireland versus England, Stuttgart, June 12th 1988.
Myself and Kaylo McInerney, then of Evergreen and now of the Kilkenny rock behemoth that is the Big Guns, were sitting behind Packie Bonner for the second half. Time after time Gary Lineker came bearing down on him. Time after time Packie stuck out an arm or a leg. Time after time Ireland survived.
Eventually the referee blew the final whistle. My pulse rate returned to normal about three hours later. As for Kaylo’s, I’ve no idea. But I’m sure I’ll be receiving a text 30 seconds after he sees this.
And yes, because we were behind Bonner in the second half, it follows that we were perfectly positioned for Ray Houghton’s goal, the same goal that topped the poll in Ireland’s Greatest Sporting Moments on RTE last week. Tony Galvin’s cross, Kenny Sansom’s miskick, John Aldridge’s knock-on and Houghton’s finely judged header. A pity about the 84 minutes of torture that remained.
Last Thursday’s programme was a piece of harmless popcorn fun, an offering that the entire country could watch and argue about – the whole point of the proceedings, of course. These things shouldn’t be too po-faced, which the show wasn’t, and categorically shouldn’t be taken too seriously.
Just one complaint. The shortlist of five great moments from the 1980s was too, well, short. A shortlist of 10 would have been more appropriate. Two omissions in particular were glaring ones. Ireland’s Triple Crown triumphs of 1982 and ’85 and Dawn Run’s Cheltenham Gold Cup win in 1986.
Granted, Euro ’88 united and energised the country in a way a Triple Crown victory never can. But those two Triple Crowns were landmark events in the nation’s sporting consciousness during the decade, particularly the second of them. Whereas the 1982 win was ground out by virtue of the strength of the forwards and the unerring boot of Ollie Campbell, the 1985 win was achieved in far more engaging style by dint of a vibrant backline and Mick Doyle’s determination to expansive rugby. Give it a lash indeed.
For this observer, however, nothing will beat Dawn Run’s Gold Cup for sheer electrifying excitement. (It was, by the by, a notable day in Kilkenny: Dunnes Stores opened its doors in Kieran’s Street for the first time.) I watched the race in Shem Lawlor’s of John Street and no, I didn’t have a bet. Not at 15/8. But I didn’t need to. My hopes in Paddy Mullins’s mare were investment enough.
Memories of the event? Plenty.
The air of barely suppressed tension in Shem’s and the hopes for a great Kilkenny triumph. The relief when Dawn Run was seen to jump her early fences cleanly, having fallen at Cheltenham not long beforehand. The resignation when, shortly after the final fence, she appeared to be running on empty. “Ah well, still a decent performance from a horse who’s a novice in all but name,” I remember consoling myself.
Then came the dawning realisation that both Wayward Lad and Forgive ‘N Forget were paddling, as if trying to negotiate their way through treacle, while Dawn Run stayed on up the hill.
The voice of the mighty Peter O’Sullevan still rings down the years. “And the mare’s beginning to get up!”
Oh yes, and the hat being flung in the air by a joyous Dawn Run supporter in the grandstand afterwards.
If nothing else, Ireland’s Greatest Sporting Moments reminded those of us who lived through the period of how fortunate we were in sporting terms. All around us was bleakness and economic crisis and political upheaval and unemployment and emigration. Yet what with Eamon Coghlan and Stephen Roche and Sean Kelly and Dennis Taylor and Barry McGuigan, has Irish sport ever been in a healthier place?
Part two of the series is on tomorrow night (Thursday). It can’t possibly be as evocative as last week’s edition.