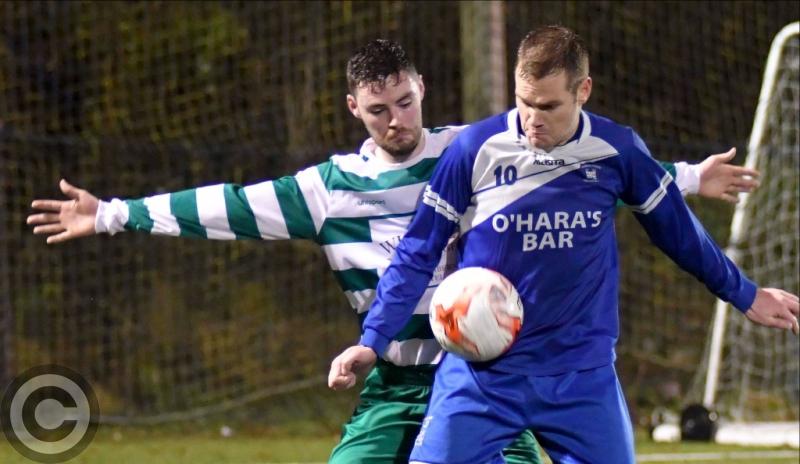 As far as Thomastown United A are concerned, the magic number is five!

United made it five wins from five games and moved even further ahead at the top of the Premier Division table thanks to their 5-0 win over Callan United A on Sunday.

The home side showed a ruthless streak in the first half, hitting their rivals for four goals as they all but wrapped up the points with time to spare. Steven Connolly led the way, scoring twice inside the opening half hour before Mick O’Neill made it 3-0 seven minutes from the break. There was time for Connolly to complete his hat-trick before half-time, allowing Thomastown to coast in 4-0 up.

Goals were a little harder to come by in the second half, but O’Neill doubled his tally 13 minutes from time to seal an emphatic win for Thomastown, who have made a great start to their domestic campaign. They are the top scorers in the division with 17 goals (although nearest rivals Freebooters A have 14 from three games) but United also have recorded three clean sheets in succession. The news is not as good for Callan, who are without a point from four games played to date.

It was a good weekend for Division One leaders Evergreen C, who cemented their position at the top of the table - and all without kicking a ball!

With Fort Rangers and Clover United sharing the spoils in a 3-3 draw, another of Evergreen’s nearest rivals also slipped up in their chase of the table toppers.

Freebooters B missed the chance to overtake their city rivals when they lost 2-1 away to Stoneyford United on Sunday morning. In what was a welcome change of fortune, Stoneyford earned their first league win at the third attempt thanks to goals from James Moran and Pat Dalton. Adam Butler replied for Freebooters, but the loss means that Conor O’Neill’s Evergreen are now two points clear of their nearest rivals with a game in hand.

Division Two pace-setters Bridge United are still top, but their 100% record is gone after Ormonde Villa stormed back to grab a 2-2 draw in Goresbridge on Sunday.

A Tom Huff brace had the home side sitting pretty at half-time, but the city side dug deep and fought back with goals from Davy Burke and Mark Croghan to level the game in the second half. They could have won it too, but missed the chance to take all three points when they spurned a penalty. Villa have only lost one game this season, but have gone on a run of four successive draws.

That stalemate in Goresbridge allowed Newpark to steal a march on their city rivals and jump into third place in the table. They did it thanks to a 4-1 win away to Paulstown 06, who are still searching for their first point of the campaign.

Newpark were good value for their win and took a first half lead through Gary Lehane’s opener. They stepped up the pace in the second half, coming back from a Paulstown equaliser to take a firm grip on the game with a Brian Maher header and a Trevor Kelly brace, before goalkeeper Enda Malone marked his day with a late penalty save.

The veteran striker helped himself to a hat-trick as the Bennettsbridge side won 6-3 in Castlecomer. Murphy struck twice in the first half, as did Jack Barcoe, as United took a 4-2 lead in at half-time. He completed his treble after the restart, with Brian Lannon completing the scoring for the winners.

Title rivals Freshford Town continued their improved run with another big win on Sunday. Town made it five wins in a row when they beat St John's 5-1 in Woodview. Doubles for Jonathan Doheny and Jordan Burke did most of the damage for Freshford, who sit a point behind East End in the table, while Jason Stanley was also on the scoresheet.

Hot on Freshford’s heels are Evergreen 46, who made it four wins from five when they beat Clover United B 3-2. James Lenihan (2) and Robbie Dowling were on the mark for the city side in Rathdowney. The result leaves them two points behind Freshford, albeit with a game in hand.

There was no such luck for the two Kilkenny & District League sides who faced Cup action over the weekend.

Evergreen’s Leinster Senior Cup odyssey is over after they lost 4-3 at home to Usher Celtic. The Dubs, who stunned Sheriff when they knocked them out of the FAI Junior Cup, picked up another prize scalp with this win on the Kells Road.

Celtic were quick to impose themselves on the game, going one up midway through the first half thanks to Glen Reddy’s goal, but Ben Hickey fired Evergreen back on to level terms just before the break.

Celtic stepped up the pace, restoring their lead through Jordan Buckley after the hour, but again they were hauled back when Sean Barcoe struck for the hosts from the penalty spot. The final quarter saw a flurry of goals - Buckley bagged a second, before Mikey Drennan fired a sweet free-kick into the Usher net, but the visitors had the final say when Reddy’s second sealed the win 10 minutes from time.

Elsewhere Highview Athletic bowed out of the FAI Junior Cup when they fell 3-2 away to New Ross Celtic. The Wexford side, who beat Castlewarren Celtic in this season’s competition, secured a second Kilkenny scalp, helped by two quick goals. Dean Broaders and Seamie Kavanagh made it 2-2 by the hour, but a late Celtic goal saw the Graig side go crashing out.