Kilkenny rugby: A win, 11 tries and Kilkenny remain in contention in Leinster League 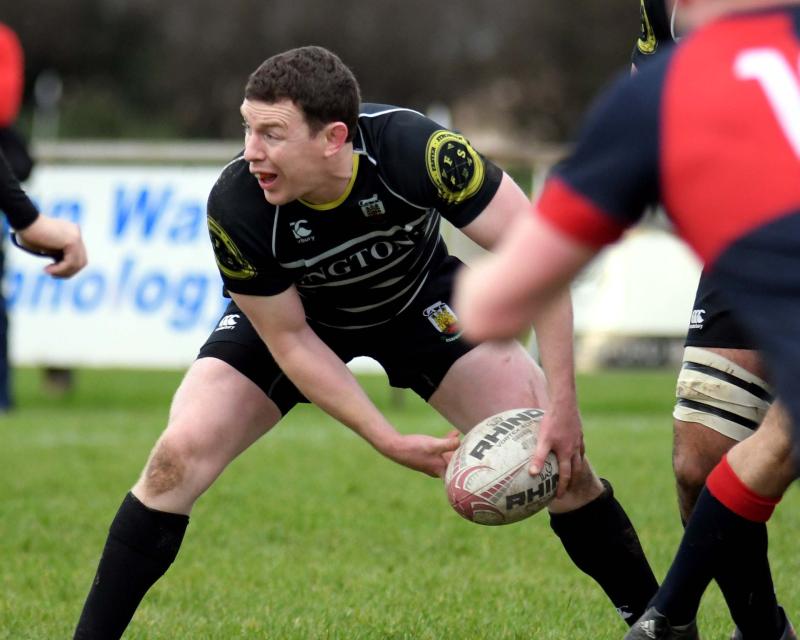 Dearan McGrath in action for Kilkenny

Kilkenny Firsts rolled back the years to the glory days of noughties and ’04 when scoring a resounding 66 point win over Coolmine in the J1 Leinster League.
It has been a considerable time since Kilkenny defeated any side by such a margin, and the hopes in the club is that the result is an indication of what lies ahead.
The starting XV looked the most balanced side coach Dermot Dunne fielded this season. Garry Dunne started as No 6. His work rate and ball carrying bought a new dimension to the back row.
Dearan McGrath reverted to scrum half, with Rory McInerney at 15 and Joe Manuel in his more familiar centre role in place of the injured Ti Lewington.
There was more fluidity to Kilkenny's play; the forwards efficient and the backs effective and moving much faster previously.
Operating like a well-oiled machine, Kilkenny accumulated 11 tries and looked like a side no one could have lived with.
From the off Coolmine were on the back foot. The first score came via Jake McDonald.
The second came through wing Sean Moran, with McDonald getting his second of the day shortly after. Kilkenny kept their foot on the gas, scoring their fourth try through No. 7 Jason Connolly.
This try secured an important bonus point.
Before the break Coolmine were reduced to 14 men following a late tackle on Sean Moran. The tackle also ended Moran’s day. He was injured and had to leave the field.
At half time the Kilkenny coach asked for more of the same. Conor Dempsey took over from Hugh O’Brien and Hugh Lane was introduced in place of the aforementioned Moran.
Fears that Kilkenny might relax were quickly put to bed. They started the new half in blistering fashion and closed out the game before the 50th minute.
As early as the 43rd minute centre Aiden McDonald crossed for Kilkenny’s fifth try. Soon after, following strong work by Conor Dempsey, full-back Rory McInerney showed immense pace from 40 meters to go over in the corner.
Kilkenny’s seventh try was a super team effort. In the build up the ball passed through the hands of 11 players taking in five phases of play before second row Graham Logan went over for his second of the season.
The eight try was scored by No. 8 Idris Rqibi before scoring their ninth off a line out maul through Jason Connolly, his second of the day.
Hooker Martin Leahy was unlucky not to cross, but strong Coolmine defence held him up short of the line. McGrath recycled and found Connolly, who wasn’t going to be stopped.
Rory McInerney showed incredible pace to score Kilkenny’s 10th. He thus become the third player to score a brace on the day.
Easy moving Kilkenny saved the best for last. From inside his own five metre line Joe Manuel attacked.
The formidable centre spotted a gap, beat two defenders before passing to Liam Caddy.
The latter, a player who loves to attack off broken play, took the ball from inside his own 22. He beat three defenders before running out of space on the Coolmine 22m line.
Caddy played a long inside pass to Dearan McGrath, who had the simplest of run-ins under the posts.
Coolmine scored a converted late consolation try, but they were never at the races.
Coolmine couldn't hold the inventive, free running opposition.
For Kilkenny this was a complete squad performance. Every player from 1 to 20 played their part.
However, special mention must be made of Garry Dunne, who put in a monumental days work. Conor Dempsey again defied the laws of propping and carried at pace around the field like a man possessed.
Scrum half Dearan McGrath marshalled the backs and forwards like an the conductor in an orchestra playing.
As good as their performances were, Kilkenny’s stand out player was Zimbabwean second row Graham Logan, whose work rate, intelligence and winning instinct out-shone all other contributions.
Conan Dunne featured in the Kilkenny Firsts squad for the first time.
The young prop has had a very successful few seasons, starting rugby at 11, the Conahy man and Castlecomer CC student has recently played two seasons at Leinster youths before stepping into the Irish under-18 squad.
This season he was the only junior club player to be selected for the Leinster under-19 elite squad, starting two and featuring in all three interprovincial wins.
His career is heading in the right direction.
Fourteen of the squad came through the Kilkenny youths system, so thumbs up to all the coaches who helped develop the talent.
Kilkenny 1sts - Hugh O’Brien, Martin Leahy, Simon O’Shea, Andy Nyenhuis, Graham Logan (5pts, 1 try), Garry Dunne, Jason Connolly (10pts, 2 tries), Idris Rqibi (5 pts, 1 try), Dearan McGrath (5pts, 1 try), Jake McDonald (28 pts, 2 tries, 9 conversions), Sean Moran (5 pts, 1 try), Aiden McDonald (5 pts, 1 try), Joe Manuel, Padraig Mahon, Rory McInerney (10 pts, 2 tries).
Subs - Conan Dunne, Conor Dempsey, Jay Leahy, Hugh Lane, Liam Caddy.
Seconds unlucky
The Seconds were unlucky when losing to unbeaten Coolmine, who head the league table.
Kilkenny put in a strong performance in a close contest. There was never more than a single score between the sides.
The half time score was 5-5. The Kilkenny score came Philip Walsh.
Coolmine went 5-10 ahead before Kilkenny replied through Ronan Moran. Entering the final minutes it looked like the home side had done enough.
However, a final play try saw the visitors clinch a 10-15 win.
Kilkenny had good performers in Brendan McIntyre and Cormac Connolly, but the eye catching performer was No. 8 Dylan Stokes, who was playing his first game for the Cats.
The Cork man recently relocated to Kilkenny for work reasons, and he is a very useful addition to the squad.
Kilkenny 2nds - Ken Shirley, Ben Devlin, Wayne Byrne, Seamus Corcoran, Brendan McIntyre (5 pts, 1 try), Ronan Moran, Jay Leahy. Dylan Stokes, Ciaran Sutton, Corman Connolly, Ian Holohan, Philip Walsh(5 pts, 1 try), Hugh Lane, Sean Flynn, Alan O’Donovan.
Subs - Liam O’Neill, Kevin Brennan, Orrin Ryan, Aiden Lawler.