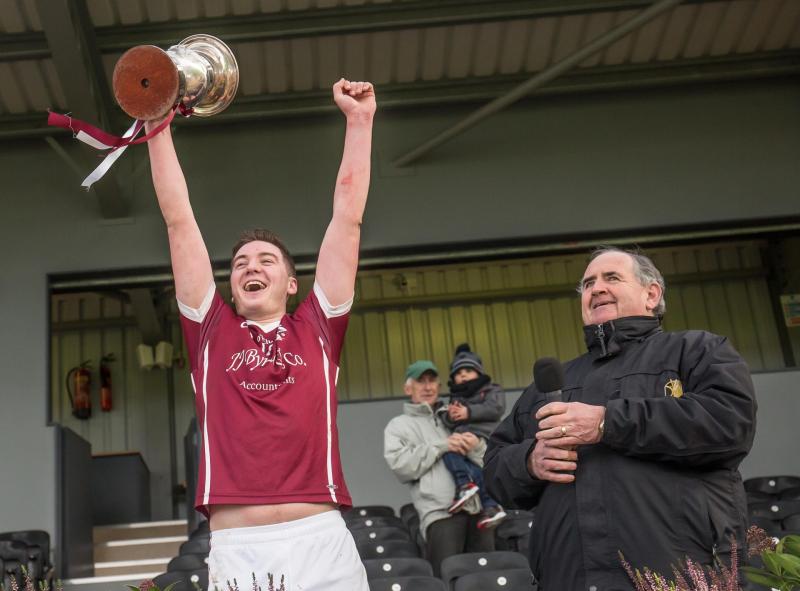 Points in the 58th and 60th minutes from Matt Kenny and Joe Connolly sealed victory for Clara in a rousing Roinn B under-21 hurling final at Nowlan Park today.
The Galmoy Windgap team put a great run of four scores together by Niall Walsh, the deadly Oisin Phelan, goalie Conor Drennan, who had been moved out field from goal, and Phelan again to throw the issue wide open entering the dying stages.
That second Phelan score came in the 58th minute and left the gap at 1-13 to 0-13.
Within seconds Jason Byrne won a great ball on midfield, and he passed to centre-back Matt Kenny, who hit the target from his own 65 to steady Clara nerve as they charged towards their third win in the competition.
The early exchanges were even, and three times the scores were level. Clara grabbed the only goal of the game through Jason Byrne in the 11th minute (1-3 to 0-3) to earn them a lead they never lost.
Clara missed a great opportunity to pile back breaking pressure on the opposition when they put a penalty shot over the bar. Still, they were good leaders by 1-8 to 0-5 at half-time.
Galmoy Windgap hung on and hung on, and when they put a run of four scores together they looked really threatening, even if time was running. However, Clara held firm.
SCORERS: Clara - James Bergin (0-5, frees); Jason Byrne (1-2, point penalty); Joe Connolly (0-4); Matt Kenny, Brian Nolan, Rory O'Keeffe, Gary Kehoe (0-1 each). Galmoy Windgap - Niall Walsh (0-5, four frees, one 65); Oisín Phelan (0-4); Conor Drennan (0-2); Conor Grace, Brendan Phelan, Kevin Duggan (0-1 each)