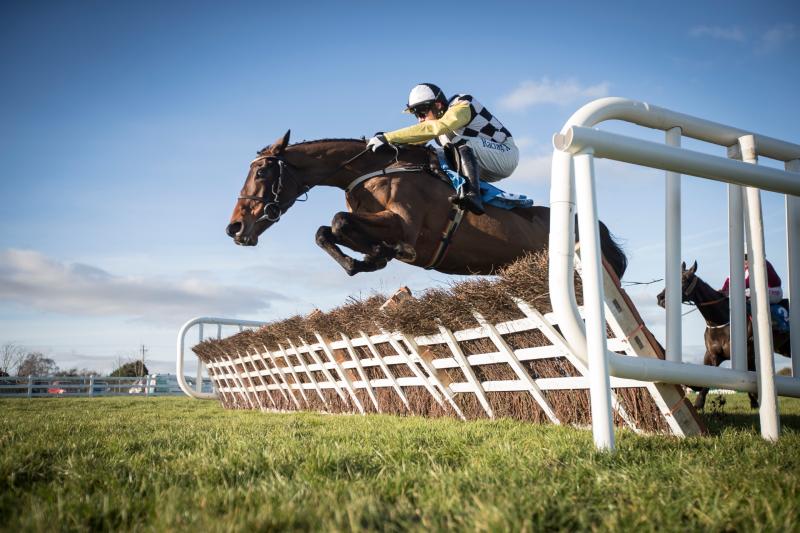 Next Destination and Paul Townend jump the final flight on their way to winning the Lawlor’s Of Naas Novice Hurdle at Naas on Sunday PICTURE: Patrick McCann

The Dublin Racing Festival at Leopardstown in early February and the Cheltenham Festival in March are targets for the Willie Mullins-trained Next Destination which won the first Grade 1 of 2018 at Naas on Sunday.

With Paul Townend in the saddle, the 8/15 favourite was pushed all the way to the line by Gordon Elliott’s Cracking Smart in the Lawlor’s Of Naas Novice Hurdle to give Mullins his fourth win in the race in the last five years.

The champion trainer had earlier won the novice chase with 11/10 favourite Demi Sang which was making a successful Irish debut under Barry Geraghty. Mullins completed a treble and Paul Townend got a second winner when 1/3 favourite Asthuria won the beginners’ chase in great style.

Jessica Harrington and Robbie Power took the opening maiden hurdle with 4/1 chance Another Barney while 5/1 chance Blue Empyrean came from off the pace under Andrew Ring to land the handicap chase for trainer Keith Watson.

The 2m handicap hurdle went to the James Grace-trained Mick The Boyo, another 5/1 chance which was giving Trevor Ryan his first winner in Ireland.

Meath trainer Gavin Cromwell enjoyed the biggest success of his training career when sending out Raz De Maree to win the Coral Welsh National at Chepstow on Saturday at odds of 16-1.

Raz De Maree, now a 13-year-old, was runner up in the race in 2016 when only finding Native River too good and he went one place better under teenage jockey James Bowen.

Raz De Maree is only three years younger than his talented jockey and the pair teamed up to great effect, staying on strongly to record a six-length victory over Alfie Spinner with Final Nudge third and Vintage Clouds fourth.

Raz De Maree is not the retiring kind and less than 24 hours after winning the Welsh Grand National at Chepstow, Gavin Cromwell reported his sprightly teenager to be showing his usual signs of wellbeing back at his base in County Meath.

“I was out taking videos of him on Sunday morning for Facebook and Twitter,” said Cromwell. “He was in brilliant form, bucking and farting out in the field.

“He came out of the race in great spirits and we couldn’t be happier with him.”

The gallant 13-year-old proved age is no barrier to success in becoming the joint-oldest winner of the race.

Cromwell is weighing up options for Raz De Maree and says the Irish and English Nationals, as well as the Midlands version, will come under serious consideration.

The Stephen Mahon-trained Smokey Joe Joe, arguably an unlucky loser when falling two fences from home at Limerick over Christmas, ran out the easiest of winners in the 2m4f handicap chase at Cork on Saturday. Ridden by Denis O’Regan, the 9/1 chance eased clear from the final fence to win for the Kilcolgan trainer.

Willie Mullins sent out two winners with Paul Townend making all the running on 4/7 favourite Livelovelaugh in the beginners’ chase and Patrick Mullins winning the bumper on 4/6 favourite Squadron Commander.

Chatham Street Lad landed a gamble for trainer Michael Winters when readily winning the rated novice hurdle under Luke Dempsey. Available at double-figure odds over night, the six-year-old was backed from 7/2 to 15/8 favourite on-course.

Another popular winner among punters was 11/4 chance Guided By You which won the 3m maiden hurdle for Noel Meade and Jonathan Moore.

He lost out by a head to Galtymore but was badly impeded on the run from the last and a reversal of the placings was always on the cards.

Charles Byrnes recorded a 1-2 in the 2m4f handicap hurdle with the Mark Enright-ridden Lite Duties, a 25/1 chance, getting the better of 10/1 shot Indian Monsoon.