Gaelic games: the lesson from rugby shouldn't be lost on hurling 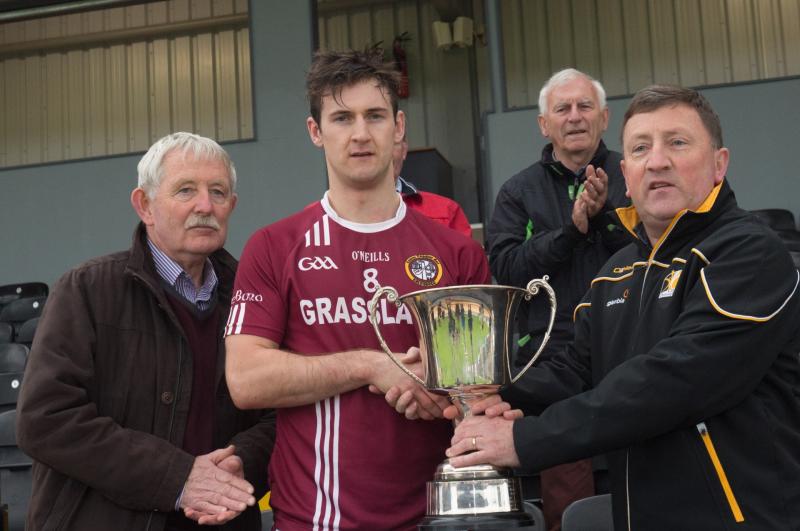 Dicksboro captain, Ollie Walsh being presented with the senior hurling league trophy which they won this season on the way to a double

Interesting column in the Irish News last week. It may have run in a Belfast-based paper and it may have been about gaelic football, but that doesn’t mean much of it was not applicable to hurling too.
In the piece, Cahair O’Kane referred to an interview he did a year or two ago with Trevor Ringland, flying winger on Ireland’s 1985 Triple Crown team, and Ringland’s sadness at the death of the club rugby game here. The best players, Ringland noted glumly, simply aren’t plying their trade there any more.
O’Kane’s personal reference point was not dissimilar: watching Anthony Tohill and Brian McGilligan go head to head for their respective clubs, Swartragh and Dungiven, when Derry football was in the ascendant in the mid-1990s. Nowadays, he went on, “the big names are strangers on their own home patch, more often hanging over the wire, their county manager having told them they can’t play…
“While the top end of inter-county football is in rude health, the obsession with monetisation and profile for the inter-county game has left the club game, and ultimately the sport as a whole, on a road frighteningly similar to the one rugby has been down.”
(On which point, who ever hears of Shannon and Young Munster these days? Perhaps Munster’s transformation into a rugby phenomenon has more than made up for the decline of the game in its working-class Limerick heartland. Perhaps not. I merely ask.)
Things haven’t got to that stage in hurling. Things certainly haven’t got to that stage in Kilkenny and they won’t. Among the myriad reasons the sport in the county can be grateful to Brian Cody is his perpetual insistence on the supremacy of the primary unit. Club first, county later.
So when the club scene comes to life here in April, teams will not be denuded of their inter-county players. But will the case be the same in Wexford or will Davy Fitz insist that he has full access to his players? And if he does, will the Wexford county board accede to his request?
These are important questions and they should be of interest to Kilkenny folk. In hurling, no county is an island.
One can see what the GAA were trying to achieve by ring-fencing the month of April for the clubs. But the moralists inform us that the road to hell is invariably paved with good intentions and in this particular case your correspondent’s opinion hasn’t changed.

The Association jumped the gun in regard to restructuring the hurling championship, getting freaked out over the prospect of more fixtures - and therefore more media coverage - in football while ignoring the reality that hurling possessed a perfectly good product in itself and that the 2017 championship had broken all sorts of attendance records.
Did they really forget so quickly that the Leinster final had attracted more than 60,000 spectators and the All-Ireland semi-finals crowds of 68,184 and 72,022? And do we really need to remind readers that more football matches, as ordained by the Super 8, will inevitably mean more bad football matches?
Enlarged hurling and football championships, as will obtain this year, should have led to some kind of rebalancing. A consequent scaling-back of the National Leagues and a dilution of the January competitions (Walsh Cup, Munster Hurling League etc).

It didn’t happen, meaning that something will have to give sooner or later. That something will be the club scene. Now imagine three years of this, three years of increasing elitism at the top level…
Premature to be coming over all apocalyptic? Possibly. But remember Cahair O’Kane and remember Trevor Ringland and remember the death of club rugby. And don’t believe there aren’t long-term implications for hurling in Kilkenny.