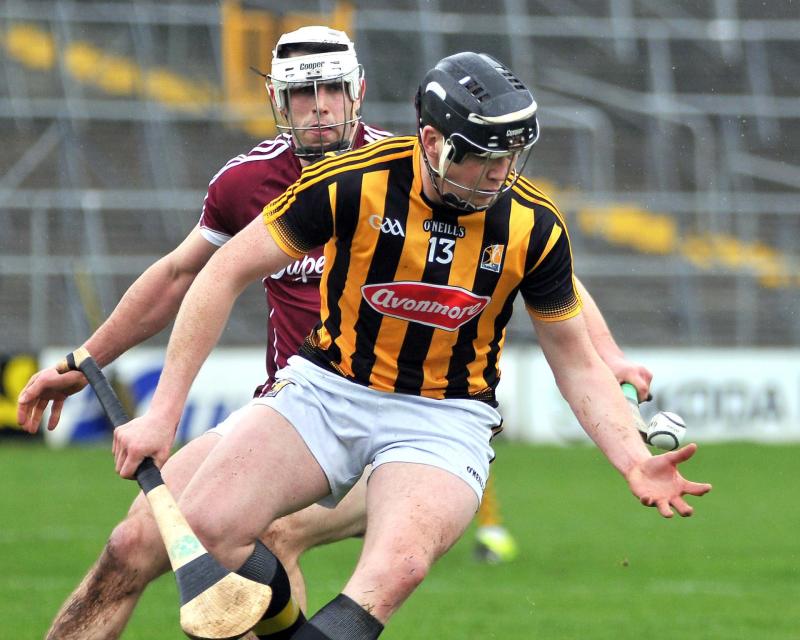 Walter Walsh has yet to play for Kilkenny this season

Kilkenny are going to have to cut loose and give the players they intend using at the start of the National Hurling League game time this weekend.
That was the conclusion to be drawn from a testing and hard earned win over Offaly in the Walsh Cup senior hurling semi-final in Tullamore on Saturday.
The big name players who came back into the team for the first time this season, the likes of Cillian Buckley, Padraig Walsh and Conor Fogarty all looked ring rusty, which was absolutely understandable.
They all looked very ordinary during the first half. During the second, however, they found their feet on a yielding and slippy pitch, and their striking, in terms of distance and accuracy, improved simply because they were recovering their game mode.
And now with a juicy and what should be a hugely attractive final against Wexford at Nowlan Park on Saturday, the time and opportunity to let players dust down their game has come.
Manager Davy Fitzgerald has lifted Wexford to exciting new heights since taking charge a little over a year ago.
Under his reign the Slaneysiders lead the match series against Kilkenny 2-1 as a fourth clash between the counties in his time looms.
They beat the Cats in the ’League quarter-finals last season and followed that up with victory in the Leinster championship in Wexford Park. On both occasions their ‘sweeper system’ game caused the opposition huge problems.
Two more clashes
On top of all that, there are two more clashes - one in the ’League and one in the Leinster championship - in the schedule further down the line.
The beauty about Saturday’s game is that both counties will be all out to win with the start of the ’League following a week later.
“The Walsh Cup is good preparation for the ’League,” Brian Cody insisted. “This final is a good game to get in advance of the first round.
“The game against Cork in Páirc Uí Chaoimh is a terrific game to start off the ’League, so that’s what everyone is aiming towards.”

His view on the season to date was straight forward. No one was flying or anything like that.
This time of the season was all about working hard on fitness and touch, and in that regard the Walsh Cup was hugely beneficial.
The Kilkenny approach has been to give as many players as possible a game. And he suggested there would be more introductions for the final.
Former All-Star T.J. Reid was picked on the starting XV on Saturday, but he just wasn’t ready to go. Walter Walsh is ready to resume, but Richie Hogan was a bit away from playing at the moment.
The Danesfort attacker didn’t see any action during the recent All-Stars trip to Singapore, but he was working his way back slowly.
Former All-Star Ger Aylward wasn’t named on any of the panels for the recent games either, and likewise new panel member Tom Aylward, who is nursing an injury.
Brian Cody was happy with the mood in the camp and everyone was working very hard and looking forward to the challenges of the season.
“It’s not very simple for players at this time of year to show what they can do, but you’re looking for commitment, you’re looking for attitude and effort, and that’s very good.”
Kilkenny are the defending champions in the Walsh Cup, but that is not a serious issue.
Sunday’s game is largely about performance, bearing in mind the Cork game the following week.
One suspects that if given the choice between winning Saturday’s final and collecting two points against Cork, that Kilkenny would plump for the latter.
However, losing to Wexford again wouldn’t be ideal, bearing in mind fixed future clashes.
To date Kilkenny sauntered through their three games.
Wexford, at least, got the benefit of a good test against Dublin at the weekend.
They inflicted the first defeat on Pat Gilroy’s team (1-20 to 0-16), powering into control of affairs after the Dubs had a man sent off.
Wexford hit the Dubs for 1-10 without reply during one period of dominance, with the likes of Paul Morris, David Dunne, Paudie and Kevin Foley, Cathal Dunbar, Aidan Nolan and Jack Guiney going well.
Their star man Lee Chin was held in reserve, but expect to see him in action in Nowlan Park.
This is going to be a trying season for Kilkenny, remembering that experienced hands Paul Murphy and Colin Fennelly will miss the entire ’League as they are away on peace keeping duties with the Army.
An added concern here is that Murphy and Fennelly might not be able to catch up in terms of sharpness for the Leinster championship after they do return home in April. That debate is for another day, but it adds to the intrigue surrounding Kilkenny and 2018.
Joe Lyng, Conor Martin, John Walsh, James Maher, Alan Murphy and John Donnelly were among the hopefuls who got themselves noticed in recent games. It will be interesting to see if any of them get the opportunity to kick on this weekend.
The absence of an imposing presence in attack, a man or two, or three to win and break ball was highlighted seriously against Offaly.
The return of Walter Walsh and T.J. Reid should help in this regard, but it will be interesting to see who makes up the supporting cast.