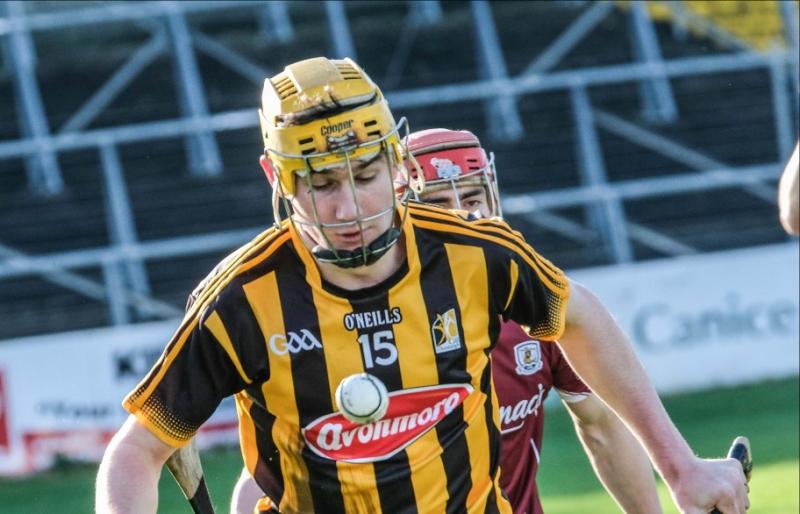 Richie Leahy was judged the man of the match

Clare needed a 73rd minute point from sub, Niall Deasy, to finally kill off Kilkenny and claim their second win in a thrilling National Hurling League tie in Nowlan Park today.
There were times, especially during the opening half, when the Cats looked all at sea. However, a powerful second half, inspired to a large degree by youngsters Richie Leahy, James Maher and Martin Keoghan had them within striking distance when the gap was down to two points with the clock ticking down.
In the end Deasy's late, late score finished the Kilkenny revival and left Brian Cody's men still chasing a win in the League.
Clare, who finished the day with 18 wides, were strong leaders by 2-12 to 1-7 at half-time. Kilkenny nabbed early second half points from Martin Keoghan and Walter Walsh, and suddenly they found a good rhythm.
The winners kept the gap to five points a good bit of the way, but when Kilkenny shot four scores in-a-row by Alan Murphy, Walter Walsh, Richie Leahy and goalie Eoin Murphy from a free between the 61st and 67th minute they had thee deficit back to 2-17 to 1-18.
There were misses at both ends after that, but then Deasy pointed to leave his mark on the game.
After an even enough opening during which four points were shared equally, Clare snatched a goal and powered away from the opposition. In the seventh minute Shane O'Donnell raced on to a good delivery from Tony Kelly inside the 20 metre line on the right, and he rounded his man before shooting high into the net.
Suddenly Clare, with a very fluid, easy running game plan, raced away. A top class save from home goalie Eoin Murphy stopped them goaling again in the 16th minute.
However, when Murphy dropped a long shot from David Reidy two minutes later and the ball fell into the net, Clare jumped ahead. A quick point from Cathal Malone left them 2-7 to 0-2 clear and motoring.
Kilkenny looked in terrible trouble and they turned to their bench. Three subs were introduced by the 26th minute, and they helped steady the ship.
The Cats put together a run of 1-4, Bill Sheehan, flicking home the goal, to get back into the game (2-8 to 1-6).
Clare finished the half well, and points from David Reidy and wing-backs, Seadna Morey and David Fitzgerald left them 2-12 to 1-7 clear at half-time.
The best of Kilkenny was still to be unleashed, but another strong and brave effort ended in defeat for a young team that is learning.
SCORERS: Clare - P. Duggan (0-5, three frees); D. Reidy (1-3); J. Conlon (0-3); S. O'Donnell (1-0); C. Malone (0-2); D. Fitzgerald, S. Morey, C. Galvin, T. Kelly, N. Deasy (0-1 each). Kilkenny - A. Murphy (0-10, eight frees, two 65s'); B. Sheehan (1-0); W. Walsh, M. Keoghan (0-2 each); E. Murphy (0-2, frees); R. Leahy, P. Lyng (0-1 each).
Kilkenny - E. Murphy, J. Holden, P. Walsh, P. Deegan, C. Buckley, R. Lennon, J. Lyng, J. Maher, O. Walsh, J. Donnelly, R. Reid, R. Leahy, B. Sheehan, W. Walsh, A. Murphy. Subs - E. Morrissey for J. Lyng; P. Lyng for O. Walsh; M. Keoghan for R. Reid; C. O'Shea for Lennon; L. Blanchfield for J. Donnelly.
Clare - D. Tuohy, J. Browne, C. Cleary, P. O'Connor, D. Fitzgerald, D. McInerney, S. Morey, C. Galvin, T. Kelly, C. Malone, J. Conlon, D. Reidy, S. O'Donnell, P. Duggan, P. Collins. Subs - M. O'Malley for D. Fitzgerald; I. Galvin for P. Collins; N. Deasy for C. Malone; J. McCarthy for P. Duggan.
Referee - J. McGrath (Westmeath).