The NHL now: Brian Cody confirms there will be changes because of Fitzgibbon Cup 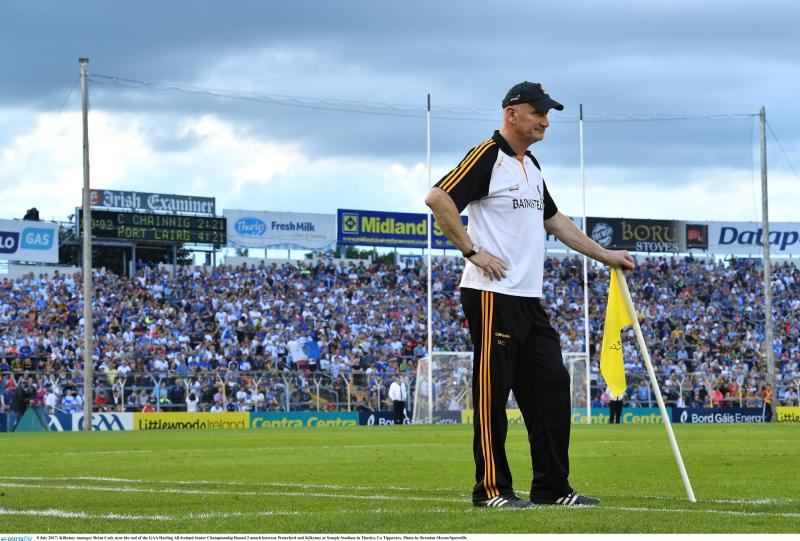 It will be colleges before county this weekend when fourth round matches in the Allianz National Hurling League clash with the wind-up of the Fitzgibbon Cup.
Kilkenny will free players this week to concentrate on hurling with their colleges.
Anyone involved in the Fitzgibbon final on Saturday won’t be considered for the mouth-watering League clash against Tipperary in Nowlan Park on Sunday.
“It is very, very testing for young lads these times,” Kilkenny manager, Brian Cody, admitted when the colleges versus county situation came up during his post match interview after Sunday’s strong League victory over Waterford in Walsh Park.
“Fitzgibbon next weekend is coming up and we will be without a few players,” the James Stephens clubman continued.
“Today we had John Donnelly, Conor Delaney and Padraig Walsh involved with us. It is a shame that the Fitzgibbon weekend clashes with a serious League weekend.
“But we will work our panel and take it on,” he insisted, adding that the colleges have to be looked after.
He then made the point that Kilkenny “will hand the players over to the colleges this week”, and anyone who has a colleges match on Saturday will be out of the Tipp game.
Management - Mr Cody, Michael Dempsey, James McGarry and Derek Lyng - most certainly worked the panel last weekend. The team picked to start showed seven changes from the one that pushed Clare very close in the previous round before losing.
“We made a few,” was the way Mr Cody described the changes. “That is the way it has been for the last few matches.
“We are trying to give everyone a decent chance; having a look at everybody and trying to juggle around a small bit.
“But as I have been saying all the time, I have good confidence in the panel that we have. We are just taking it from match to match and giving a few different lads a start on different days.
“Generally speaking we would be happy enough with what is going on,” he assured.
Was he satisfied that the newer players were bedding in?
“Absolutely,” he assured, “because if you look at the team there was an awful lot of new players out there. We had very little experience in the team for the last few matches and if the young players weren’t bedding in, we wouldn’t be competitive.”
He wouldn’t speculate on how happenings now might impact on the Leinster championship which will be played on a round robin basis, starting on May 13 against Dublin in Parnell Park.
“Look, the new-style championship, first of all we are trying to progress in the League,” he replied.
Strong Panel
“The championship is going to be similar to the League in lots of ways. You go out and play every Sunday and to do that you are obviously going to have a strong panel.
“Injuries will play a part in that. But from our panel, our players are exposed to serious games and that is important. You have to play the game in front of you.”
His classification of Sunday’s victory was “good”.
“We had no points in the League up to that,” he reminded. “We lost both our previous games by three points. We were competitive but we needed the points and we got them.
“We have two more matches to play against very serious teams, but this was a good display and a good win.”
He felt it was a very competitive game. Kilkenny pulled away towards the end, but it was serious stuff all through.
“Obviously Waterford are a top team, and we are very happy with the win,” he smiled.
When pressed on the exciting form of young Martin Keoghan he said his work-rate around the field was excellent, as was his finishing. Keoghan had played well in the last couple of matches, he added.
“He is a good young fellow coming into the panel for the first time,” Cody continued. “He is young and I think he is making good progress.”
Pat Lyng’s work rate was massive too, he felt.
Eoin Murphy’s saves were crucial too, he continued, but then he was a very good goalkeeper. Cody said there were a lot of good goalkeepers around the country, and Eoin Murphy was one of them and he was a huge asset to the squad.
“The Tipp match is different now,” he said when he turned his thoughts to next weekend. “They are a top team. It will be a huge challenge for us. That is why we play the game. The lads are looking forward to it.
Lifts Team
“It lifts the team when you get a result like this. If we were facing into the Tipp game down three matches the heads might be down. Today should give the players a lift in confidence.”
Former Hurler of the Year, Richie Hogan, was still nursing a back injury and was a long way from returning to action, the manager confirmed.
“He is still a bit away I’m afraid,” Cody revealed. “He certainly won’t be appearing over the next few weeks in any circumstances. He is trying to work his way back gently and to do whatever is best for his own health.”