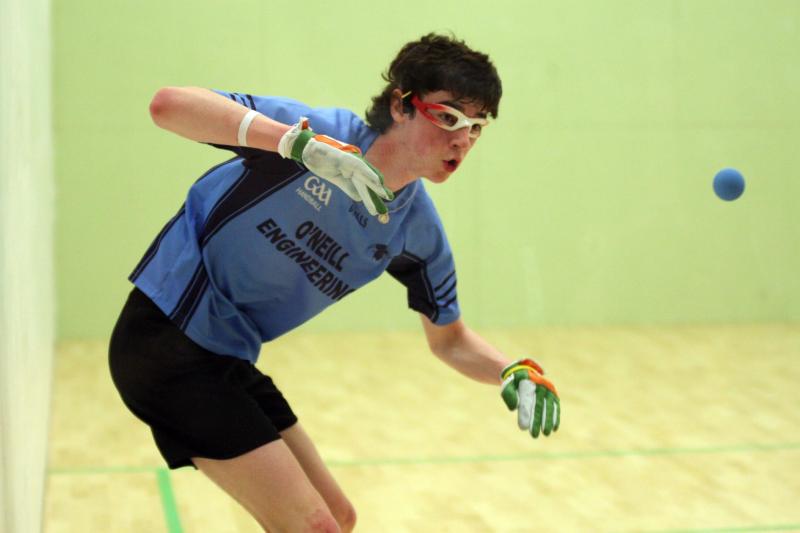 In the Leinster 40x20 juvenile handball finals considerable success was enjoyed by Kilkenny boys and girls.
The action started on Thursday night in O’Loughlin’s, continued on Friday night and then on Saturday and Sunday moved to Laois venues, Monavea and Cullahill.
The first title was won on Thursday night when James Purcell (Windgap) and Joe Prendergast (Kells) defeated Wexford in the boys under-13 doubles final, 15-12, 15-4.
This was followed on Friday with wins in boys under-12 doubles and boys under-15 singles.
At under-12 level the Kells duo, John Hayes and Cathal Buckley defeated Wexford 15-10, 15-14.
In the under-15 singles, John Doheny (Galmoy) scored an impressive win against Wexford opposition, 15-1, 15-0.
On the same programme the Windgap/Clogh duo Nathania Jackson and Lauren Power put up a great fight when losing in the girls under-14 doubles decider against Wexford, 15-9, 2-15, 11-15.
On Saturday in Monavea a number finals featured Kilkenny and Wexford players.
The first was in boys under-14 singles. Kyle Jordan (Kells) confirmed his position as the No. 1 player in this age group with a fabulous display when winning 15-1, 15-3.
In boys under-14 doubles the Galmoy pair of Daniel Hanrahan and Thomas Sharkey were never under any pressure as they won 15-2, 15-2 against Slaneyside opponents.
Barron/Phelan win
This was followed by wins in boys under-15 and 16 doubles and in boys under-17 singles.
In the under-15 doubles final the Windgap/Kells pair of Sean Barron and Ciáran Phelan claimed the title with a 15-10, 15-10 victory.
In the under-16 doubles decider, Kyle Dunne (Clogh) and Jack Doyle (Windgap) were impressive winners when advancing to the next round (21-13, 21-14).
To complete a good day for locals, Jack Holden (Kilfane) was a convincing 21-5, 21-5 winner in boys under-17 singles against Laois.
There were defeats for Kilkenny in boys under-13 and 16 singles.
In the undere-13 decider David Holden (Kilfane) lost 15-5, 10-15, 11-15.
In the match of the day Billy Drennan (Galmoy) produced a magnificent 21-6 win in his first game against Wexford’s Josh Kavanagh. However, the power of the Wexford player proved decisive.
He won the next two sets 21-14, 11-4.
The action switched to another Cullahill then where the emphasis was on the girls competitions.
In the under-12 grade Kilkenny got off to a great start when winning the singles and doubles finals.
Comfortable winner
In singles Una Duggan (Galmoy) was a comfortable 2-0 winner over Laois. Clogh’s Katie Brennan and Holly Byrne took the doubles title, defeating Laois on the same scoreline.
The under-13 doubles crown was won by Aishling Cooney (Clogh) and Orlath O’Shea (Windgap) 15-3, 15-10.
This was followed by the under-14 singles win by Amy Brennan (Clogh).
There were additional wins in the girls under-16 and 17 singles championships.
In under-16 Roisin O’Keeffe (Kilfane) beat her Carlow opponent in two games. Noelle Dowling (Mothel) came out on top in her undere-17 tie eagainst Meath.
On the day the county suffered a number of defeats. In under-13 singles Aoibhe Ryan (Kilfane) lost to Carlow 2-0.
In the under-15 grade Aoife Woods (Mullinavat) lost to Wexford 15-2, 15-3 and in the doubles decider Rachel Doherty/Cliodhna O’Shea (Kells/Windgap) were defeated 15-6, 15-8.
In under-16 doubles the honours went to Laois when they beat Sonta Jackson/Aine Duggan (Windgap/Galmoy) 21-5, 21-7.
The Leinster winners progress to the All-Ireland series against Connacht in two weeks time.
Adults
In recent Leinster adult championships there was disappointment for John O’Neill, Goresbridge when he lost to David Stanners (Wexford) in the men’s Over 35 ‘B’ final. John won the first game 21-10, but lost the next two 21-16, 21-12.
In the junior ‘B’ singles decider, Enda Hawe (Windgap) was defeated by Myles Carroll, Kildare in two games.
In the junior final Brian Mahon (Clogh) came up short against Gaelon O’Riordan (Wexford).
The Leinster minor singles decider was an all Kilkenny affair between defending champion, Eoin Brennan (Kells) and Ciáran Cooney (Clogh). Brennan retained the title, 21-12, 21-18.
There was also a win for Shane Dunne (Clogh) in his under-21 contest with Carlow.
Leinster fixtures
Saturday at Tinryland (5pm) LJBD final, Eimear Dunphy/Louise Walsh (Laois) v Margaret Purcell/Caoimhe O'Shea (Kilkenny); 5.30pm LMD final, Leah Doyle/Mollie Dagg (Kildare) v Dearbhail O’Keeffe/Mary Ellen Phelan (Kilkenny); at Garryhill (5pm) MD semi, Pauric Foley/Eoin Brennan (Kilkenny) v Cian Kehoe/Robert Cogley (Wexford); 5.30pm MD semi, Ciaran Cooney/Billy O'Neill (Kilkenny) v Colm Parnell/Ciaran Power (Wexford); Coolboy (6.30pm) DMBD final, Gerry Murphy/Sean Love (Kilkenny) v Brendan Murphy/Miley Byrne (Wex).