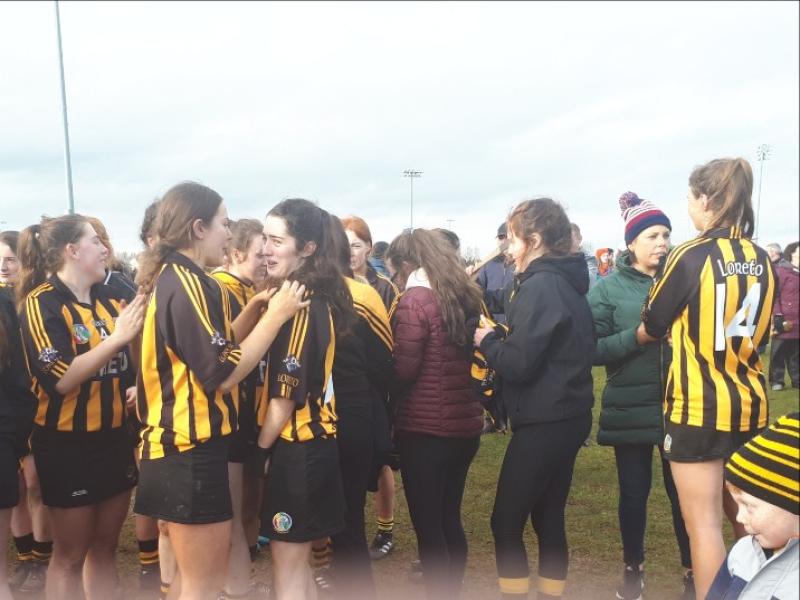 The Loreto Secondary School, Kilkenny kept their remarkable run going in the post primary schools senior camogie championship Roinn A when they claimed their sixth title in nine seasons, but it was only after a gripping battle against Cross and Passion (Ballycastle).
The winners led by a commanding 2-10 to 0-2 at half time after playing with the light breeze, and it looked like it was all a matter of crowning them queens once again. However, the game was only beginning.
Cross and Passion exploded into life in the new half. They grabbed goals by Ciara Laverty and the brilliant Roisin McCormick within two minutes of the restart to set the final alight in Darvar this afternoon.
It was a thundering contest from there to the finish, and the Loreto had to dig deep to hold on to their crown. When Charley McCarry lashed home the losers third goal on 51 minutes to reduce the gap to 3-7 to 2-15 the Loreto needed something big to halt the charge.
They got it in the shape of a pointed free from 60 metres by the gifted Rachel Kelly, which was followed by a pointed free from Caoimhe Dowling after a driving run by the wonderful Steffi Fitzgerald was halted.
Between those scores the Loreto had a player dismissed after being shown a second yellow cards, but crucially, they had regained their composure and that pair of points gave them breathing room.
While the losers did score a fourth goal and had the gap back to three points a minute from the end, the victors had the final scoring say when Dowling and Ruth Kent worked the ball to Steffi Fitzgerald, who scored the insurance point in the 64th minute.
The Loreto produced a superb brand of combination play from the off. Before they knew what hit them Cross and Passion were 2-3 to no score behind, Katie Brennan and Ruth Kent putting their names on the goals.
On they galloped, with Steffi Fitzgerald leading the attack with some wonderful direct running and striking, and Jane Cass a real chance maker at top of the right. Hannah Kelly, Kent and Fitzgerald did most of the scoring damage as the half-time tally ran up to 2-10 (again 0-2 remember).
The real match was about to begin, however.
SCORERS: Loreto SS - Ruth Kent (1-3); Katie Brennan (1-1); Rachel Kelly, Steffi Fitzgerald (0-4 each); Hannah Kelly (0-3); Tara Clifford, Caoimhe Dowling, Ciara O'Keeffe (0-1 each). Cross and Passion - Roisin McCormick (2-5); Charley McCarry, Ciara Laverty (1-0 each); Kirsty McKendry, Anna Connolly, Dearbhail Magill (0-1 each).