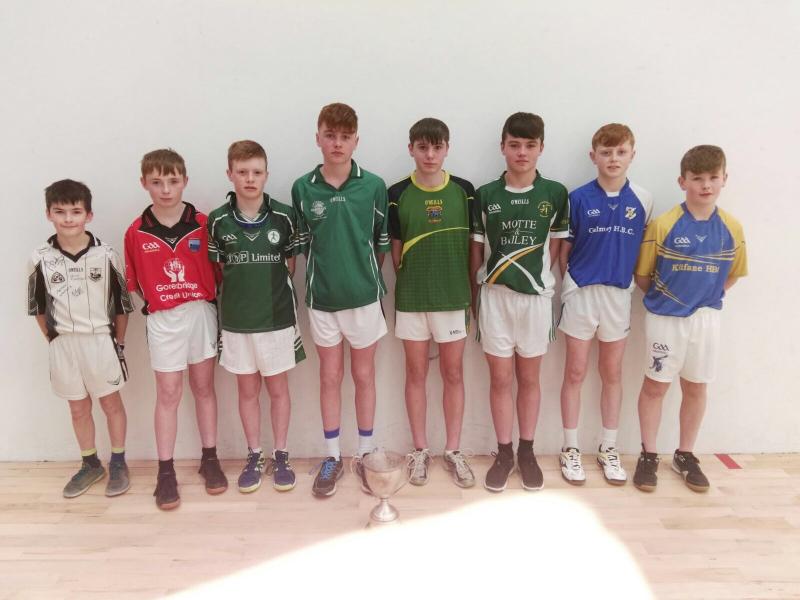 Last weekend was a very busy one for the handball community when the All-Ireland juvenile and adult singles finals were played in Kingscourt.
Kilkenny players contested eight All-Ireland finals, six in juvenile and two in adult competitions, and they brought home three gold medals, all in the boys grades.
On Monday the action focussed on the best young players across the country when they played the All-Ireland juvenile finals in Cavan.
Contesting six finals, there was success in boys under-14 and 16 doubles and boys under-17 singles.
Representing the county in under-14 doubles were Daniel Hanrahan and Thomas Sharkey, Galmoy. They were in top form when accounting for Tyrone’s Conor Owens and Patrick McCann 15-7, 15-8 to secure a great win.
The boys under-16 pairing of Kyle Dunne and Jack Doyle were crowned champions when defeating Tipperary in the decider. The Clogh/Windgap duo were far too strong for Jack McGrath and Conor O’Dwyer, winning 21-4, 21-7.
To crown a good day for Jack Holden, Kilfane was a convincing winner of the boys under-17 singles, defeating Donegal’s Odhran McGlynn 21-5, 21-11.
Kilkenny suffered defeats in girls under-14 singles when Amy Brennan lost to Tyrone 15-10, 15-8. John Doheny (Galmoy) was beaten in boys under-15 singles by Tipperary, 15-9, 10-15, 15-0, and girls under-16 singles, Roisin O’Keeffe (Kilfane) was defeated by Tyrone, 21-9,21-15
There was no success for Kilkenny in the adult deciders played at Kingscourt on Saturday. They lost to Clare and Galway opposition in two All-Ireland finals.
In the minor singles decider Eoin Brennan, Kells was playing in his second successive final. Last year he was beaten by Cork opposition and this time it was another Munster player.
The very impressive Tiernan Agnew, Clare was a convincing 21-8, 21-9 winner. This was a disappointing end to Eoin’s career in the minor grade, but he has made great strides in his development.
On the same evening at the Cavan venue Margaret Purcell, Windgap was involved in the All-Ireland ladies junior ‘B’ singles final against Eimear Ni Bhiadha, Galway.
The two games were even enough with the Westerner claiming the honours when winning 21-14, 21-11.
Great season
Well done to Margaret on a great 40x20 season. She will, no doubt, bounce back from this loss more determined than ever.
In the Leinster juvenile team finals against Wexford on Friday there was success for Kilkenny in the boys under-12/13 and under-14/15 events but the under-16/17 team lost.
Over the last couple of years these competitions have proved very successful for Kilkenny players, and this continued in 2018 as the teams now enter the All-Ireland series.
The teams are under-12/13, Niall Drennan (Galmoy), Conor Doyle (Windgap), John Hayes, Cathal Buckley (Kells), Michael Brennan (Clogh), David Holden (Kilfane), James Purcell (Windgap) and Joseph Prendergast (Kells).
Under-14/15 - Conor Holden (Kilfane), Luke Flannigan and Dominic Bolster (Clogh), Harry Delaney (Kells), David Sherman and Gearoid Phelan (Galmoy), Sean Purcell and Adam O’Shea (Windgap), Mickey Kerwin (Glenmore),
Under-16/17 - Tom Holden (Kilfane), Tom Carroll (Talbot’s Inch), James Love (Clogh) and Conor Foley (Windgap).
Doubles semi-finals
There is no let-up in the handball action this weekend. The All-Ireland semi-finals in the doubles championships will be played at Leinster and Ulster venues.
With some Leinster championships not completed until this week due to the recent bad weather, there are still some semi-finalists to be determined.
Definitely playing at the weekend will be Shane Dunne and Padraig Cooney (Clogh) in under-21 doubles; Willie Holden (Kilfane) and Eddie Bourke (O’Loughlin’s) in Silver Masters ‘A’ doubles; Philly Parsons (O’Loughlin’s) and Eamonn Purcell (Windgap) in Emerald Masters ‘A’ doubles and Margaret Purcell/Caoimhe O’Shea (Windgap) in ladies junior ‘B’ doubles.
In the men’s Open championships there are qualifying matches scheduled for Saturday in Cashel when Kells brothers, Patrick and Peter Funchion play Cork.
The winners will play the quarter-final against either Meath or Tyrone on Sunday.
In the ladies competition, Ciara Mahon (Clogh) and Aoife Holden (Kilfane) take on Fiona Tully and Leona Doolin (Roscommon) on Saturday in the semi-finals.