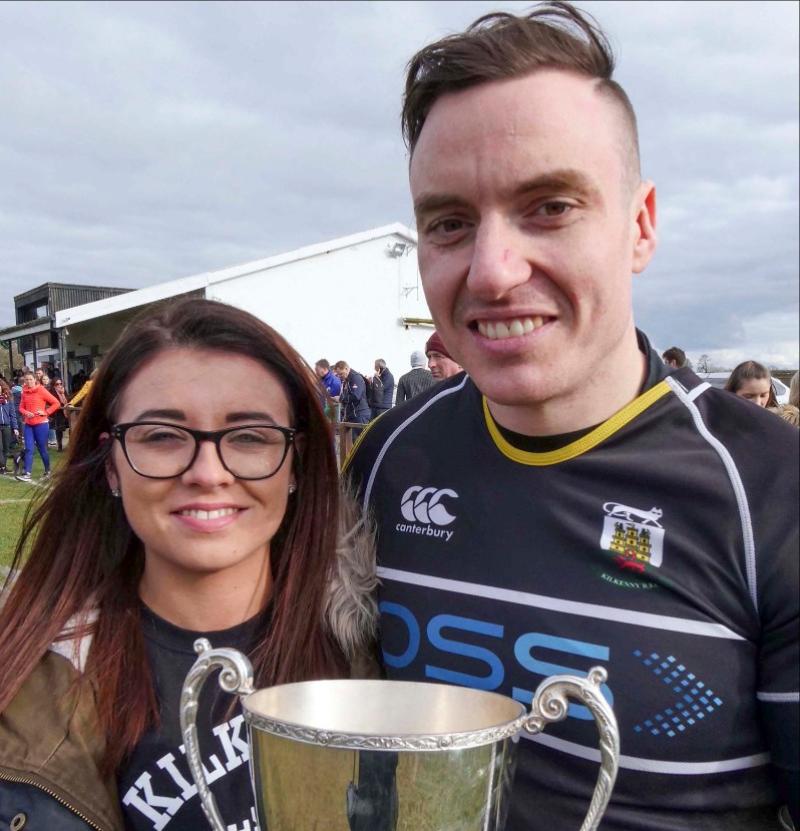 Believe, and back yourself to fly even higher in the future!
That was the challenge from Kilkenny rugby coach, Dermot Dunne, to the players after the Foulkstown outfit charged to a commanding win in the Leinster League Division 1B.
The Cats produced a compelling brand of attacking rugby when scoring four tries before mounting a late, late backs to the wall effort to defeat Suttonians in a ‘winner takes-all’ shoot-out in the Division 1B league at Foulkstown on Sunday.
Kilkenny won 32-17 after leading 15-5 at half-time after making all the running.
“There is a lot more in this group, an awful lot more,” insisted coach Dermot Dunne, who has worked the magic with the squad since taking charge last November 12 months when Kilkenny were on a slide out of Division 1A.
After putting structures in place initially to help build up confidence, Dunne knew Kilkenny were ready to go this season. And now he wants more for the club.
“We will have to recruit, to being in new blood to challenge the players,” he continued.
“Most of the players can go to the next level. It is up to themselves really.”
What now, we wondered?
“Division 1A and back to Saturday rugby,” the coach smiled.
“When I came here our goal was to go straight back up if we were relegated. The aim after that was to chase a place in the middle of the table in 1A, which would get us maybe top four, which would get us All-Ireland Junior Cup.
“That is where we aim to go next season.”
To run up 32 points was a nice score, he felt. He reminded that Kilkenny hit a bump or two in the road during the season, but they simply drove on.
Losing to Longford at home was one setback, but that acted as a “kick up in the behind” which served the squad good in the long run.
“We spoke about that,” Dunne explained. “We worked through things. We improved the players skills. We improved the players knowledge of the game.
“When we get into certain zones we know we have to put the hand on the jugular and score. They did that today.
“We could possibly have scored another few tries if they had executed things a bit better.
“I have no fears for this group. This could only be the start of things. I would love to win 1A eventually, and it is not beyond the team. We just need to get a bit more strength in depth.”
Promotion Drive
The youth system, he said, and the solid support from the club executive, fed into the drive for promotion after the disappointment of relegation last year.
Young Conan Dunne, who is playing at 18 and a half level this year, was promoted to the Firsts squad and team captain, Podge Mahon was a tower of strength as the enthusiasm for promotion took hold.
The coach reminded that work took star man, David O’Connor to Finland this year, and if he returns next season that would be a big boost.
Home grown players were the key to any drive forward, he insisted, backed up by adding a bit of experience through recruitment.
“Things are looking very positive,” Dunne felt.
In terms of support, he said he and the back room staff of Paddy McDonald, Barry Daly, Derek Lawlor and New Zealander, Ti Lewington couldn’t ask for more.
“I think we can go an awful lot further,” he added.
The coach said all the hard work was done earlier in the season. All knew what Sunday’s target was.
It was only a matter of executing the game plan, having taken Suttonians style asunder.
Played to Game plan
“The team played really well,” Dermot felt. “They played to the game plan we had organised. We knew what Suttonians weaknesses were and we worked on that.
“The players took ownership of the challenge throughout the season.
“I am only the steering wheel. They are the team, the club. Without them and their commitment nothing would happened.
“From the start it was all about getting confidence rising again. Kilkenny had lost four or five matches on the trot when I came in, so it was a matter at that stage of trying to stabilise things and build confidence.
“Behind the scene in pre-season that is where all the work is done with players, getting the leaders and a leadership group into the set up.
“The leaders helped drive things on. We just put the structures in place, and the leaders took things from there,” the coach insisted.