Evergreen A 2, Freebooters A 0 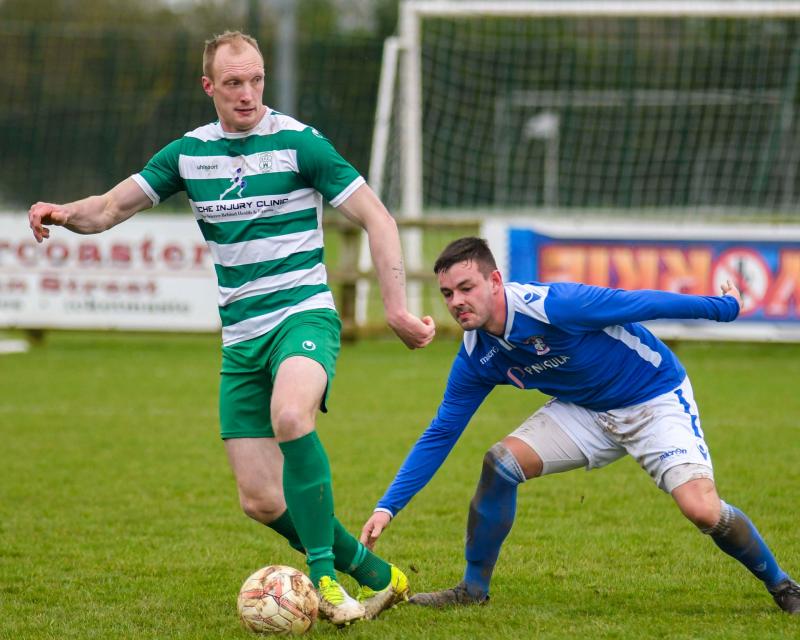 The race for the Premier Division title is still red hot after two first half goals gave Evergreen A three precious points.

The defending champions showed an attacking edge and defensive steel in equal measures as they beat old rivals Freebooters A on the Kells Road on Wednesday night.

Mikey Drennan and Jamie Owens did the damage, grabbing the goals that saw Gary Maher’s side close the gap on leaders Thomastown United A.

After a scoreless first half hour Drennan broke the deadlock in style when he stepped up to a free-kick on the edge of the box and curled a sweet strike over the four-man wall.

Freebooters goalkeeper Ciaran Farnan got his right hand to the strike but couldn’t stop it hitting the back of the net.

The goal came at the end of a good spell of Evergreen pressure, but Freebooters could have made life difficult for their rivals before that.

The visitors had a chance to take an early lead when Emmet Nugent got in behind the defence and latched on to Paddy Cahill’s telling ball, but he couldn’t beat Philly Johnston with his clever chip.

On a night when both sides looked to their experienced players for leadership, it was some of the younger ones who impressed the most. Dara Keane and Sam Hickey shone under the floodlights for Evergreen, while Divine Amaukwu and Joe Banville led the way for ’Booters.

The game turned Evergreen’s way after that Drennan free, which came after a lung-bursting run from Keane ended in a foul on the edge of the box. The home side kicked on after that, doubling their lead three minutes from the break after Jamie Owens cushioned a Hickey cross past Farnan.

Evergreen suffered a setback when they lost Niall Andrews to a red card early in the second half, the captain getting his marching orders for two yellow cards dished out in little over 60 seconds.

Despite the numerical disadvantage they didn’t relinquish their two-goal lead. Tightening things up in midfield they disrupted Freebooters’ passing game. Chances were few and far between for the Blues after that. Henry O’Neill went close to pulling a goal back when he curled a 62nd minute free towards the top left corner, but Philly Johnston sprang across his line to beat the ball away to safety.