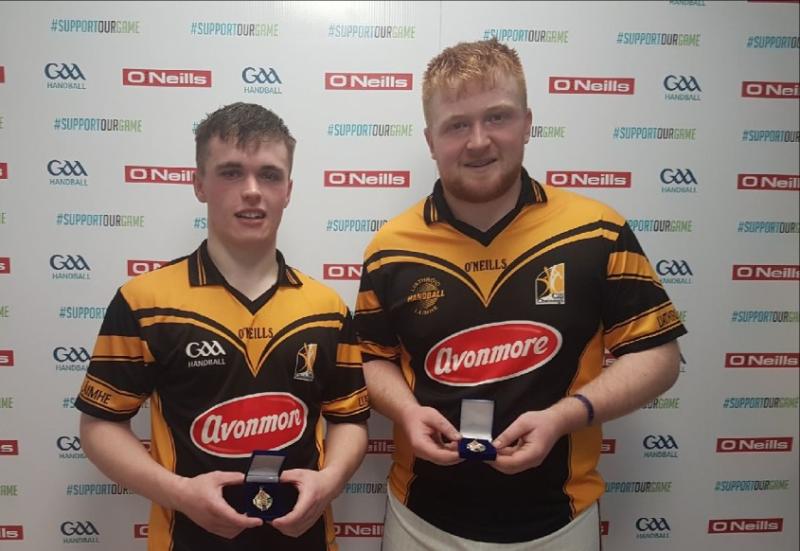 Last weekend the All-Ireland 40x20 championships were completed with the doubles finals in Kingscourt.
Kilkenny contested two finals on Saturday and another six on Sunday. Victories were scored in two championships.
Saturday
First up were Clogh duo Shane Dunne and Padraig Cooney in the under-21 doubles final against Colin Ryan and Jason English, Tipperary. The Kilkenny lads were in top form after their tremendous semi-final win over highly fancied Tyrone and they carried this into the final.
On top from the start, Shane and Padraig were never in any trouble during either set. They comfortably saw off the Munster challenge 21-7, 21-13 to take the title.
Later in the day the minor doubles final featured Eoin Brennan (Kells) and Padraig Foley (Windgap) against Clare’s Tiarnan Agnew and Mark Rodgers.
In what was an ususual match from a scoring point of view, the Kilkenny pair fell short in their quest for All-Ireland glory.
They lost the first set 21-2. They came from behind in the second game to bring the contest to the tie break set when winning 21-19.
Here the effort of the second game fightback took its toll as the Munster pair proved worthy champions, winning the set 21-1.
Sunday
On Sunday morning there were six Kilkenny pairs playing finals in two courts.
The ladies junior ‘B’ doubles duo from Windgap, Margaret Purcell and Caoimhe O’Shea played Galway’s Aisling Mullin and Eimear Ni Bhiadha. The Westerners were comfortable 21-8,21-4 winners.
Defeat was also the lot of the ladies junior doubles pair in the decider against Tipperary.
Putting in a great performance in the first set, Aoife Holden (Kildare) and Claire Love (Clogh) came up short when losing 21-16 to Sinead Meagher and Roisin Cahill.
In the second game the Tipperary pair built up an early lead and closed out the match 21-1 to claim the title.
There was also disappointment in junior ‘B’ doubles as Kells duo Anthony Martin and Diarmuid Burke came out on the wrong side of a 2-1 defeat.
Winning the first game 21-6, they suffered a narrower 21-19 loss in the next set.
The third and deciding game was dominated by their opponents, Kavan O’Keeffe and Anthony Fitzgerald from Waterford and they sealed victory when winning 21-3.
The only success recorded by the county on Sunday was in the Silver Masters ‘A’ doubles final when Eddie Bourke (O’Loughlin’s) and Willie Holden (Kilfane) defeated Clare’s Fergal Coughlan and Tom Kirby.
Playing together for the first time this year the Kilkenny pair won the first set 21-12.
They lost the second 13-21 but recovered in the third game to secure their first title in this grade when winning 21-15.
The Emerald Masters ‘A’ doubles decider was also a three set match.
Here Philly Parsons (O’Loughlin’s) and Eamonn Purcell (Windgap) lost to Cork’s John Herlihy and John Hedigan.
The Munster pair took full advantage of a slow start by the Kilkenny pair, winning the first game 21-3.
A close second game was shaded by Kilkenny 21-20, but in the third set the Cork duo were convincing 21-8 winners.
In intermediate doubles Ciaran Neary (Talbot’s Inch) and Brendan Burke (Kells) again suffered defeat in the final.
Up against the impressive Cork pair, Michael Hedigan and Daniel Relihan, the Kilkenny pair lost out in two very competitive games, 21-19, 21-11.
Junior Nationals
Next weekend the handball action will again focus on Kingscourt and the surrounding areas as the Irish Junior Nationals will played at courts in Cavan and Monaghan.
With some of the winners securing positions on the Irish squad for the forthcoming World handball championships in Minnesota in August, the competitors will have added incentives to do well.
As this is a World Championships year there are some changes to the regular handball calendar.
One involves the One Wall Nationals which will be played on the weekend of May 5/6/7 in Breaffy House, Mayo.
One of the most popular events during the season. The online entry for these nationals is now open.
To select the doubles pairings for the Irish squad the Open doubles trials are scheduled for Saturday and Sunday, April 21 and 22 in Kingscourt.