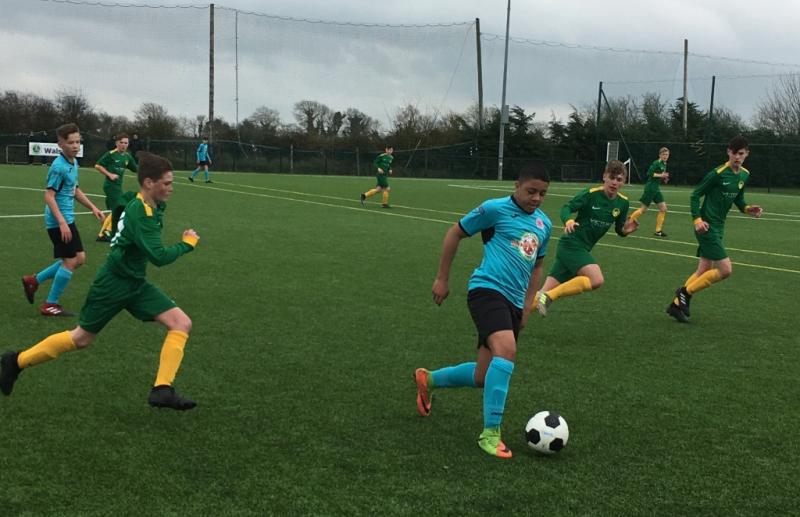 Hard work and a solid team performance paid off handsomely as Carlow Kilkenny FC scored their first ever win in the SSE Airtricity Under-15 League.

Eamon Lalor and Daryl Ntumba grabbed the headlines as the home side continued to improve in their maiden season.

A week after earning their first point in the 0-0 draw with Wexford, Carlow Kilkenny knew they would be in for a tough battle against a well-drilled Cobh side. The visitors, led by the impressive Eric Nolan in midfield, pushed hard for an opening and thought they had found it with a swift 23rd minute attack. Slick play from Brandon Idah saw Lee Obo Kelly sprint down the right wing before drilling in a low cross, but Bradley Walsh's shot crashed into the side netting.

Carlow Kilkenny did well to contain Cobh - Fionn McCaffery and Adam McCarron excelled in the heart of the defence - and they got their reward just two minutes later when Eamon Lalor's inswinging corner deceived goalkeeper Diarmuid Byrne and ended up in the Ramblers net.

The home side pushed on for a second goal, going close when Niall Rowe latched on to a bouncing ball, but his 33rd minute long range strike failed to hit the target. Cobh continued to press for a way back into the game and thought they had found it when Bradley Walsh picked out Obi Kelly with a great pass but his 38th minute strike crashed off the Carlow Kilkenny crossbar.

Cobh stepped up their efforts in the second half, but with Eoghan Byrne helping to strengthen the Carlow Kilkenny ranks the visitors couldn't break their hosts down. Their hopes took a real hit when, with four minutes of normal time left, Carlow Kilkenny doubled their lead. Daryl Ntumba, a physical threat when introduced in the second half, used his pace and power to race on to Rory O'Dowd's clever pass and then outmuscle his marker before slipping a low shot inside Byrne's near post.

It wasn't plain sailing to the final whistle - Cobh sub Tiernan O'Brien hit the post late on - but Carlow Kilkenny held on for all three points, and their second clean sheet in succession. Next up is a trip away to Waterford FC next week.