He produced six winners on one of the racing days 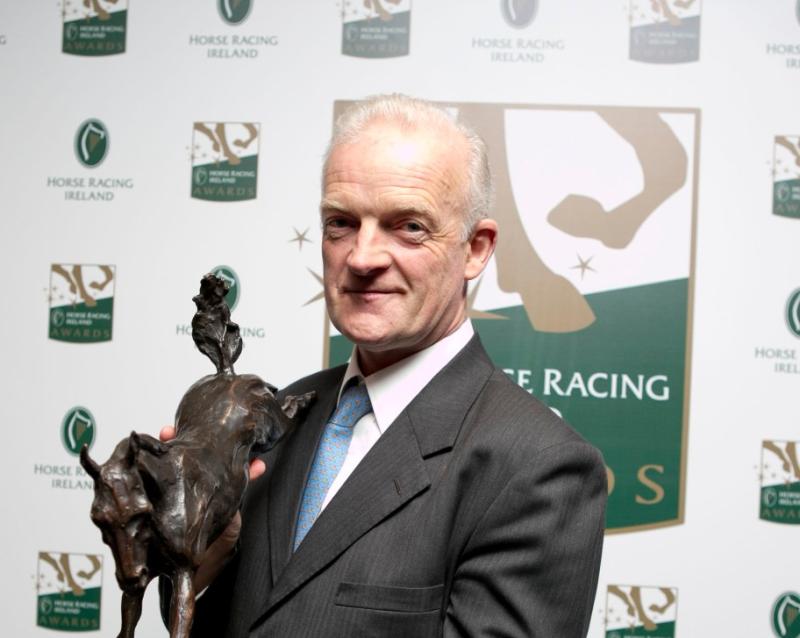 Willie Mullins came with a late rally to again deny his great rival Gordon Elliott the title of champion trainer as the 2017/2018 National Hunt season ended at Punchestown this week.

The champions in six categories were presented with their awards at Punchestown racecourse by Minister for Agriculture, Food and the Marine, Michael Creed TD.

As he did 12 months ago, Willie Mullins left it late to secure the title of champion trainer. He only went to the head of table on Wednesday of last week when he saddled six winners at the same meeting for the first time.

The biggest contributor to Mullin’s record prize-money tally of €5,968,275 was Un De Sceaux which recorded three wins in Ireland during the season, culminating with his all-the-way success in the Grade 1 BoyleSports Champion Chase at Punchestown on Tuesday.

Patrick Mullins is the champion amateur rider for the tenth time. He lost out to Jamie Codd by a single winner in last season’s championship but easily regains the title with 57 winners this time.

He won the Grade 1 BoyleSports Champion Chase on Un De Sceaux earlier this week and Grade 2 success came his way when successful on Getabird in the Sky Bet Moscow Flyer Novice Hurdle, also at Punchestown, in January. A more valuable success came on Blackbow in the Grade 2 Goffs Future Stars INH Flat Race at the Dublin Racing Festival at Leopardstown the following month.

Davy Russell is champion jockey for the third time. He first won the title in the 2011/12 season with 104 winners and held on to the crown the following season with a final tally of 103. His final total this term is 119.

His biggest single success came on the Henry De Bromhead-trained, Gigginstown House Stud-owned Balko Des Flos in TheTote.com Galway Plate and there were Grade 1 wins for the Youghal, County Cork jockey on Death Duty in the Bar One Racing Drinmore Novice Chase at Fairyhouse, Apple’s Jade in the Squared Financial Christmas Hurdle and Mick Jazz in the Ryanair Hurdle at the Leopardstown Christmas Festival.

Davy enjoyed other high profile wins on the likes of Mala Beach, Doctor Phoenix and Presenting Percy and wrapped up a remarkable season, which included a first success in the Aintree Grand National on the Gordon Elliott-trained Tiger Roll, at Punchestown this week with Grade 1 success on The Storyteller in the Growise Champion Novice Chase.

Gigginstown House Stud are the leading owners for the fourth successive season and for the sixth time in all. Their most valuable win came at Fairyhouse on Easter Monday when General Principle, trained by Gordon Elliott and ridden by J.J. Slevin, won the BoyleSports Irish Grand National.

The famous maroon and white colours were also carried to success in the TheTote.com Galway Plate with the Henry De Bromhead-trained, Davy Russell-ridden Balko Des Flos and the Guinness Kerry National with Potters Point, which was ridden by Lisa O’Neill for Elliott.

In only his second season as a professional, Donal McInerney is the champion conditional rider with 33 winners. From County Limerick, his highest-profile winners came here at Punchestown this week when he won the Friends First Cross Country Steeplechase for the La Touche Cup on the Enda Bolger-trained Auvergnat, at Cork in October in the coopsuperstores.ie Handicap Chase on the Enda Bolger-trained Ballyoisin, at Gowran Park where he won the Holden Plant Rentals Shamrock Handicap Chase on Goulane Chosen for trainer Seamus Spillane and at Cork again where he won the FBD Insurance Handicap Hurdle on the Noel O’Neill-trained Ministerforsport. In all, Donal rode winners for 18 different trainers during the term.

In terms of winners ridden, Lisa O’Neill has easily enjoyed her best season and is the Leading Lady Rider with a tally of 20 beating Nina Carberry and Katie Walsh, who both retired after riding winners during the 2018 Irish National Hunt Festival at Punchestown, by five and six winners respectively.