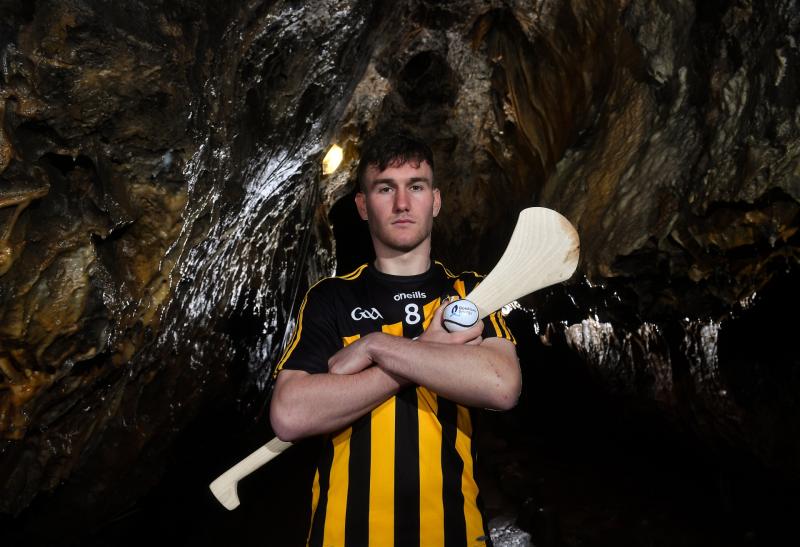 KIlkenny's Richie Leahy was at the launch of the Bord Gáis Energy GAA Hurling U21 Championship at Mitchelstown Caves. Follow all of the action at #HurlingToTheCore. PICTURE: Eóin Noonan/Sportsfile

Richie Leahy turned 21 in March and like all his contemporaries he has never known anyone to be Kilkenny manager other than Brian Cody, so to get a call from him last year to come into the senior squad was special.

But Leahy has never had to go far to find inspirational figures given that he hails from the Rower-Inistioge club which produced Eddie Keher, and while he’s too young to have seen him in action, he grew up hearing about the exploits of the six-time All-Ireland winner.

“With the club, we won minor and under-21 not so long ago and sure Eddie would be at all the games and coming out giving you a pat on the back coming off the pitch," Richie recalled. "Eddie would be watching every game and encouraging you. You’d know he’s on the bank watching you and that’s kind of cool to know that.”

Cooler still was the call a year ago from Cody to come in and join the senior squad. Leahy made an instant impression, going on to make his Kilkenny debut in the championship against Waterford.

“It was unreal to get the call, but I wasn’t really thinking of it in that way. I was just thinking that I’I have to go in and hurl’ so if I look back on it now I suppose it’s unreal that he’s the manager but it could be anyone.”

But, of course, he has never known another manager of Kilkenny?

Leahy, who was speaking at the launch of the Bord Gáis Energy GAA hurling under-21 All-Ireland championship at Mitchelstown Caves at Cahir in Tipperary, said he was looking forward to competing on two fronts this summer.

GAA president John Horan said the under-21 championship continues to grow in stature each season.

“This competition never fails to bring fans to the edge of their seats and I am looking forward to seeing what the 2018 campaign throws up,” Mr Horan said.

It’s the tenth year that Bord Gáis Energy has sponsored the under-21 hurling  championship and acting Head of Retail with Bord Gáis Energy, Colin Bebbington said another season of exciting action was about to start.

“We’re extremely pleased to be going into the tenth year of our partnership with the GAA and our sponsorship of the Bord Gáis Energy GAA hurling under-21 All-Ireland championship," he said. "Over the past decade, we’ve witnessed the competition grow from strength to strength and we are extremely proud to have played a part in its continued success.”

The competition starts on Monday when All-Ireland champions, Limerick will put their title on the line when they make the short journey to Cusack Park in Ennis to play Clare. Kilkenny won’t be in action until the Leinster semi-final on June 20.

Leahy said they were preparing well for the competition. And if it’s not enough growing up a neighbor of Eddie Keher and getting called in for his senior Kilkenny debut by Brian Cody, his under-21 manager this year is another legend, D.J. Carey.

“I had him with the Fitzgibbon in IT Carlow and he’s nice as well," Richie said. "D.J. is very passionate and he wants to get the best out of us so hopefully we can get over the semi-final. D.J. is just preparing us for that.

“I saw the clips growing up so I know what D.J’s like. It’s cool to be able to be managed by such a legend of the game so hopefully now he can be a good manager.”

Leahy won an All-Ireland minor medal in 2014 in the first of two seasons at that grade and progressed to the under-21 team in 2016, having twice tasted All-Ireland colleges glory with St Kieran’s College.

He will be hoping to play his part with Kilkenny on two fronts - under-21 and senior levels.

And the composure he brings was evident back in February in that cracking league encounter against Tipperary in Nowlan Park when he landed the match-winner from distance to snatch a dramatic 2-22 to 2-21 victory.

“Well, I missed two easy ones before that so I was like ‘I’m going to have to get one now so’ so I just kind of hit and hope and hope it goes over," Richie admitted. "I needed one to go over or else I would have been taken off sooner.

“It was nice to get the win out of the league. We’re happy enough with that,” he added.