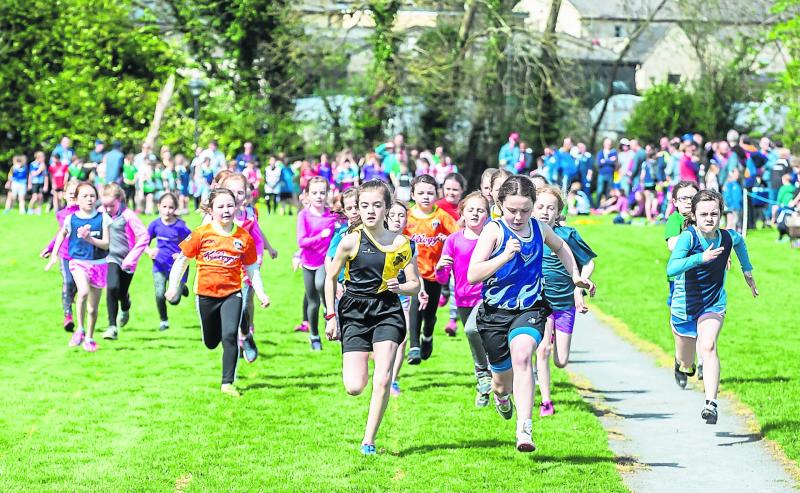 AND THEY’RE OFF!: Runners dash from the start line during the girls’ under-10 300m event at the St Senan’s AC Open track and field championships in Kilmacow PICTURE: PAT MOORE

The weather was anything but kind to the athletes who made the trip to Waterford’s RSC for the South Leinster Schools Championships.
Held on a showery and cold Winter-like day, athletes would have been forgiven for donning multiple layers in order to keep warm.
Despite the elements, there was strong representation for several of the county’s clubs with St Senan’s, Thomastown, Castlecomer, Kilkenny City Harriers (KCH), St Joseph’s and Gowran all in action.
The day started well when Peter McDonald (St Senan’s), representing Good Counsel New Ross, threw his way into the record books in the minor javelin.
A new South Leinster record was a great start to the schools season for Peter, who has been throwing over 40m this season. The result leaves him in a great position to make a podium challenge in the Leinster Schools Championship on May 16.
Castlecomer Community College produced a fine minor 100m champion in the form of Sophia Kerr. Sophia won her heat comfortably and produced a massive effort in the final to win by over a meter.
Later in the day the Castlecomer athlete went on produce a late effort in securing the bronze in the 500m. Fellow Castlecomer AC clubmate and ’Comer CS student Nicky Connolly finished second in the boys’ intermediate 3,000m walk. Both Nicky and Sophia will represent their school at the upcoming Leinster Schools Championships.
Molly O’Dornan was sixth in the 800m with fellow clubmates Kate O’Neill and Aoibheann Ryan also performing well on the day.
David Williams (St Senan’s AC) led from start to finish to win the minor boys’ 800m for St Kieran’s College, winning by a margin of 10m from his nearest competitor Padraig Spillane of Clongowes Wood.
St Kieran’s had three more medal winners. James Kearney (KCH) won the intermediate boys’ 2,000m steeplechase while Tom Lodge (KCH) was third in the minor boys’ 1,100m. All three athletes will qualify for the Leinsters. Colm Murphy was unlucky in the junior boys’ sprint. His third place was not enough to secure qualification, as only the top two qualify in the 100m and 200m events.
Another Kilkenny winner was Hannah Kehoe (Gowran AC). Representing Loreto Secondary School Hannah powered into the lead right from the start and increased her lead substantially with each lap of the minor girls’ 1,100m. Hannah, who recently represented Ireland in the schools cross-country international, showed her class and expertise over this longer track event.
In the junior girls’ 1,500m Fiona Dillon (Thomastown) gave Portlaoise’s Ava O’Connor a strong challenge but had to settle for second place in the end. Fiona has been going from strength to strength this year, after her long battle with injury, that kept her out of athletics for most of 2017.
Also competing in this race was Eleanor Godden (KCH), who was running for the Loreto. Eleanor, who produced a magnificent race in the recent All-Ireland schools cross-country when winning the event and earning international selection, finished fifth in this event.
Sinead O’Keeffe (Thomastown) swapped the 1,500m for the steeplechase this year and made a winning start to the discipline. She ended her first ever steeplechase competition with a bronze medal. The Loreto-based athlete will now compete in the intermediate girls’ steeplechase in the Leinsters.
Evan O’Toole (St Joseph’s AC) came away with two medals for Good Counsel. He won silver in the junior high jump and a bronze in the 80m hurdles. Also known to be an avid long jumper, the schools athletics confines athletes to just two events.
Ciara Mullally (St Joseph’s AC) had a great day at the races. This minor athlete, who represented St Mary’s, New Ross, secured a double silver in the 100m and 800m. She is a talent to watch in the future.
Ciara’s big brother Thomas (Good Counsel) was third in the junior boys’ triple jump. 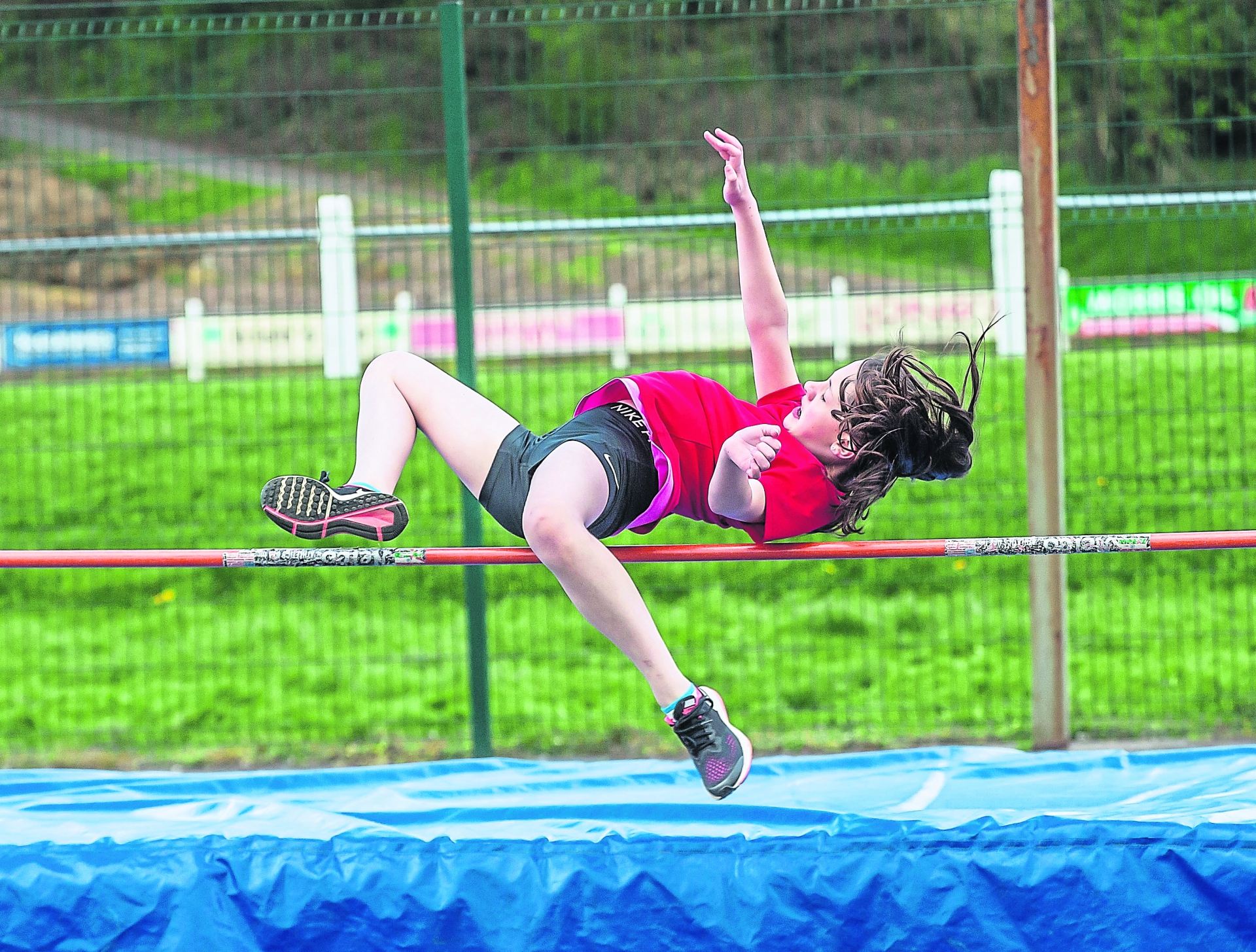 Chloe Lynch (Gowran) clears the bar during the high jump competition at the St Senan’s AC Open track and field championships
Good Counsel also produced a sterling performance when they came second to Roscrea in the junior boys’ 4x100m relay. On this team were Danny Glennon and Eoin Kennedy of St Joseph’s AC. Other St Joseph’s AC athletes to compete were Danielle Griffin, who was sixth in the junior 1,500m and Niamh O’Connor, who was fourth in the junior walk.
Waterford
In contrast to the chilly conditions of the South Leinsters the Waterford Schools Track and Field had some signs of Spring weather.
The Kilkenny focus mainly centred on athletes from two clubs, St Senan’s AC and St Joseph’s AC.
St Senan’s shattered another schools record, this time in the minor discus. From a standing throw Tadgh Connolly (Abbey CC) produced a massive effort of 38m.
This phenomenal young athlete is so versatile, and so far this year has produced national medals in cross-country, shot-put and race-walking. For good measure he also won the minor boys’ shot-put with the furthest throw of the day, even surpassing that of the senior boys.
Tara Ramaswamy (St Senan’s) representing the Presentation, had a battle all the way in the intermediate girls’ 1500m with Una O’Brien (Waterpark). Tara finished second but with speed sessions just starting the results could be different the next time around. Aoife Allen (St Senan’s) represented the Mercy and was third in the same race.
Sophie Jackman (St Senan’s) representing the Abbey Community College was first in the intermediate 300m and fourth in the triple jump.
Saoirse Allen (Mercy) was second in the junior girls’ 800m and first in the high jump. Clodagh Monahan (Waterpark) was fourth in the intermediate 800m. Josh Fenton and Ryan Cummins ran the 800m and both were in the top six.
St Joseph’s had two athletes competing, both representing the Abbey CC. Rachel Foley showed great speed to finish third in the Minor 100m, while her sister Erin finished in the exact same position in the junior 100m.
Erin also won another bronze medal in the long jump, with Rachel finishing eighth in the minor girls’ 800m.
New PB
Having set a new personal best for the 5km Peter Lynch (KCH), representing the University of Tulsa, set another record when he produced a new PB of 30.40 while running in the 10k event at the Drake Relays in Des Moines, Iowa.
Peter was third in the event and was the top collegiate athlete, a great sign of his return to form.
County Coaching
Athletes from St Senan’s, Gowran and Brow Rangers availed of the recent free coaching sessions offered by Kilkenny Co Board.
The father and son team of Irish internationals Murty and Joe Kelly (Brow Rangers) used their expertise and knowledge to assist younger Kilkenny athletes in the hammer and discus. This was the second day of throws coaching and all the athletes have gain much from these sessions.
The Co Board have encouraged more clubs to avail of these opportunities, especially in specialised events such as hammer.
Road Relays
The KCH quartet of Thos Hayes, James Ledingham, Brian Maher and Eoin Everard secured third place in the National Road Relays held at Raheny, Dublin. The team finished in the same place this year as they did in 2017. The winners were Raheny Shamrocks with Dundrum South Dublin in second place. The KCH ‘B’ team of Tom O’Keeffe, James Kearny, Shay McEvoy and Kevin Burns finished ninth.
Track and Field
All athletes and athletic clubs are reminded that the county track and field season begins in earnest this Sunday in Scanlon Park.
There will be events for boys and girls from under-8 to under-19 levels as well as junior, senior and masters 1,500m races. All athletes are expected to wear their club colours and are reminded that spikes should be no greater than 5mm. Athletes must be registered with their clubs to compete.
Some very competitive races are expected this year, especially in the middle distance races, where athletes from several of our county clubs are among the best in Ireland.
Kilkenny has some champion athletes across all levels, with some quality running, jumping, throwing and walking expected. Activities start at 11am.