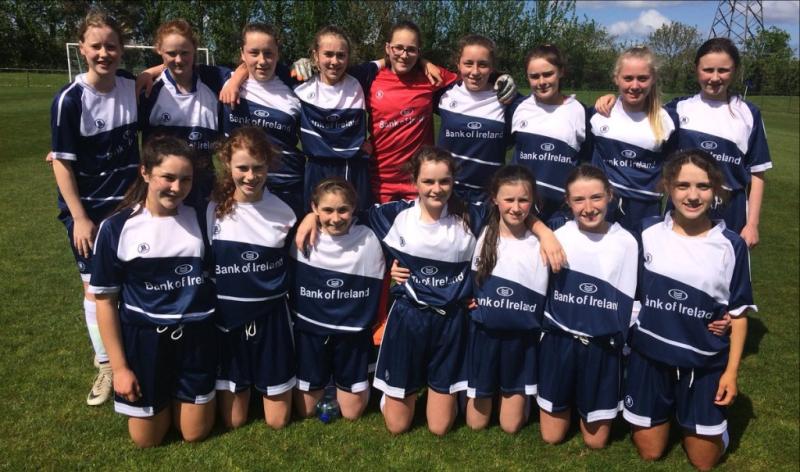 There was agony for the Loreto Kilkenny as Sacred Heart School, Westport captured the Bank of Ireland FAI Schools First Year Girls National Cup in dramatic fashion at the AUL Complex.

The Kilkenny school suffered a heartbreaking loss as the Mayo girls took the spoils in a nail-biting penalty shoot-out after neither side could break the deadlock even after 20 minutes of extra time.

Then skipper Katie McNea turned the tide in favour of Westport when she produced two top class saves to keep out efforts from Meaghann O’Mahony and Orla Kenny and send the sizeable and enthusiastic travelling fans from Mayo into wild celebrations.

It was a first national title in 10 years for the Western school but you had to feel sorry for the Kilkenny side who had dominated most of the second half and created the better chances but were unable to beat the brilliant McNea who stood firm between the posts and dealt with everything that came her way.

A last chance for Loreto to snatch a late win fell for Orla Kenny who powered through the Westport defence and look set to finally beat McNea but unfortunately she dragged her effort just outside the post.

Westport had opened well and they had a glorious opportunity to go into an early lead when Aoife Staunton was sent clear on goal and after her first effort was blocked by Loreto ‘keeper Rebecca Pellicer Bergamo, the Mayo girl put the rebound wide.

Extra-time opened in dramatic fashion when Loreto were awarded a penalty after Luci Brennan was taken down in the box by Aenea Breslin.

Skipper Amy Clifford stepped up to take the penalty kick and once again McNea proved to be her side’s hero with another brilliant save.

Neither side managed to get close to scoring after that and the lottery of the penalty shoot-out finally decided what was a classic encounter in favour of the gritty Mayo girls.