Soccer: Big week in Kilkenny & District League as Evergreen A and Freebooters A battle it out for Premier Division prize 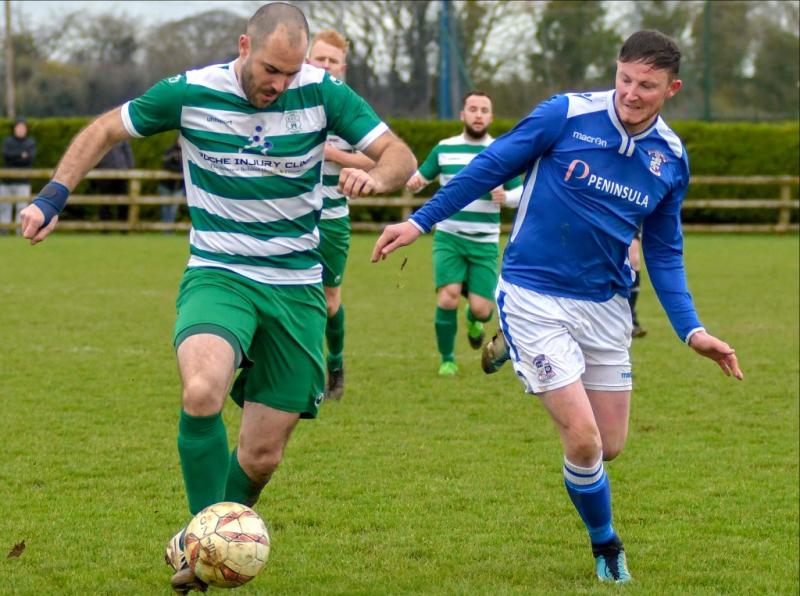 Niall Andrews (Evergreen A) and Henry O'Neill (Freebooters A) could meet in a vital Premier Division battle on Thursday evening PICTURE: MICHAEL BROPHY

The race for the Premier Division title could take an interesting twist this week as the Kilkenny & District League season heads towards the final stretch.

Champions Evergreen A can wrap up the top flight title for third season in a row if they get a result away to Freebooters A. The big game between the city rivals, which is sure to attract plenty of attention, kicks off at the Fair Green on Thursday at 7.30pm.

The message for Gary Maher’s side is simple: win or draw their last game of the campaign and the title is theirs. However, a slip-up will keep the dreams of both Freebooters and Thomastown United A alive.

’Booters go into the game knowing a win and nothing less will keep them in the race for the prize. Graham Doyle’s side must beat their old foes to stand any hope of taking the title charge to the final day of the season, when they take on Thomastown in United Park.

Stevie Walsh’s team will be watching on anxiously on Thursday evening. They will be hoping for a Freebooters win, as that is the only result which will keep their ambitions alive. Trailing Evergreen by three points, United need Freebooters to win this week. Should Thomastown then beat Freebooters, they will force a title playoff with Evergreen.

The destination of the Division One league title could also be decided this week as Evergreen C entertain Clover United on Wednesday evening.

The Rathdowney side are currently top of the table, and need just a point from Wednesday night’s game on the Kells Road (kick-off 7pm) to secure the silverware. Evergreen, who are currently third, need a win to draw level with second-placed Fort Rangers. If they do that they can take the title themselves should they beat Freebooters B in their last game of the season.

Finally, Sunday will be a big day for Freebooters, who take on Nurney Villa in the semi-final of the Leinster Youths' Cup. The Blues booked their place in the final four thanks to an impressive 3-2 win away to St Kevin's Boys last weekend.

Two first half goals from Jim Ryan and Success Edogun sent Lee O'Sullivan and Derrick Kenny's side on their way, before Ryan grabbed his second to seal their semi-final berth against the Carlow side. Kick-off at the Fair Green is at 11am.

This week’s fixtures in the Kilkenny & District League are:

Highview Athletic A v Deen Celtic A, 11am.

Under-14 Schoolgirls’ League Division One

Thomastown United A 5, Highview Athletic A 0.

Under-14 Schoolgirls’ League Division One

Under-14 Bennettsbridge Parts League Division One

Thomastown United A 1, Deen Celtic A 1.

Deen Celtic A 2, Thomastown United A 1.

Under-13 Kilkenny People League Division One

Freebooters A 0, Thomastown United A 3.