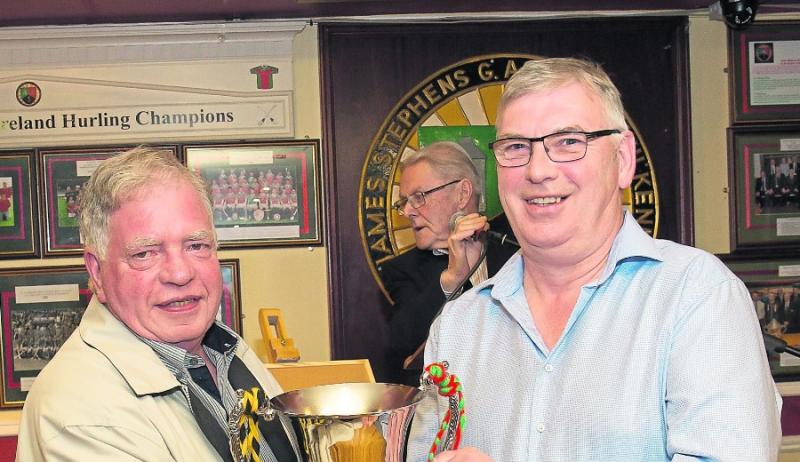 Former secretary of the Schools Board, Paul Kinsella (left) presents the cup to John Leahy, son of Georgie

A much loved friend of Gaelic games in Kilkenny who was variously described as a “great” and “wonderful man”, “a messiah” and a “remarkable” individual was feted by grateful colleagues who shared his passion for hurling.
The late Sean ‘Georgie’ Leahy, who died around this time last year, gave a lifetime playing and promoting hurling in Kilkenny and beyond. He was remembered and honoured at a special presentation night in the James Stephens clubroom.
Mr Leahy, a proud James Stephens clubman, was a champion of the underdog. The new cup, presented annually to the winners of the Kilkenny Primary Schools Roinn C hurling championship, will carry his name from now on.
Members of the Retired Primary Schools Teachers Association provided the cup in appreciation of the work Mr Leahy did for the promotion of Gaelic games in schools in the county. Many of the members would have worked directly with Georgie and this was their way of honouring his memory.
Wonderful man
Retired teacher, Joe Dunphy, who was MC at the function attended by stars of the past and present, club and school officials and friends, recalled that he played against Georgie at schools level.
“To me Georgie Leahy was a wonderful man,” he said. “He was a gentle giant. I don’t think I ever knew a more popular man.
“He was involved in every aspect of Gaelic games, and he probably won more senior All-Irelands - hurling and camogie - than anyone here.”
He said it was wonderful that Mr Leahy was to be honoured in the fashion he was, because he had a special love of schools games.
“He started and finished at schools level,” he said, reminding that Mr Leahy was a coach with the County Board after retiring from work in the P&T.
“With pipe in mouth, he was so, so good with the youngsters at the Summer Camps,” Mr Dunphy continued.
“He didn’t mind what club you were from, he was your friend.”
Tributes were led by James Stephens club chairman, Paddy Neary, who described Mr Leahy as a “great man”, who in many ways was ahead of him time in terms of coaching. He was a man of vision, he felt, who in hand with the late Bill Cody helped establish the under-age network in the club.
He recalled Mr Leahy’s illustrious playing career, which included the winning of senior and junior hurling and football championships.
Mr Leahy also won a national senior boxing championship, was a selector with Kilkenny All-Ireland winning teams at all levels, camogie too. In 1976 he was the sole selector, trainer and manager as James Stephens won their first All-Ireland club hurling championship.
Common touch
“He had the common touch, a word of encouragement for everyone,” Mr Neary insisted. “He wore the No. 14 hurling jersey and the No. 3 football jersey for the club with pride and passion.”
He reminded that Mr Leahy also won a club hurling All-Ireland with Glenmore, and three with the St Paul’s camogie club. He worked with a number of county teams and he served as chairman of Bord na nOg between 1981 and 1984.
“He passed on his love of the games to our generation, and the generation beyond,” the chairman insisted.
County Board chairman, Jimmy Walsh, said he was delighted to be part of the recognition of the life and times of Georgie Leahy.
“He was a remarkable GAA man, and he was very well thought of in so many places,” he said in his opening remarks. “His gospel for the world was hurling, and he was the messiah.”
He was immensely proud of The Village, but he loved all the little villages, all the small clubs, the chairman felt.
“Working as a coach for the County Board was a labour of love,” Mr Walsh said. “He knew every teacher and player, and the results of his work are still being felt.
“In life Georgie was easy paced,” the chairman continued. “He was my type of hurling man: quiet and effective.”
Tributes
Tom Duggan, chairman of the Schools Board, and Brendan O’Sullivan, who served on the Leinster Council with Mr Leahy, also paid tribute to Mr Leahy.
Mr O’Sullivan thanked the Leahy family for all their kindness, and for sharing Georgie “with us”.
“It was a privilege to have known him,” he insisted.
John Leahy, son of Georgie, replied on behalf of the family. He spoke about how much the family appreciated the gesture. He said it was fitting his father ended up as a coach with the County Board. It wasn’t a job to him. He loved it.
“Every night he was raving about some young lad or girl he had worked with,” he smiled. “His aim always was to leave any group or team he worked with in a better place than when he started.”