Freebooters A 4, Evergreen A 1 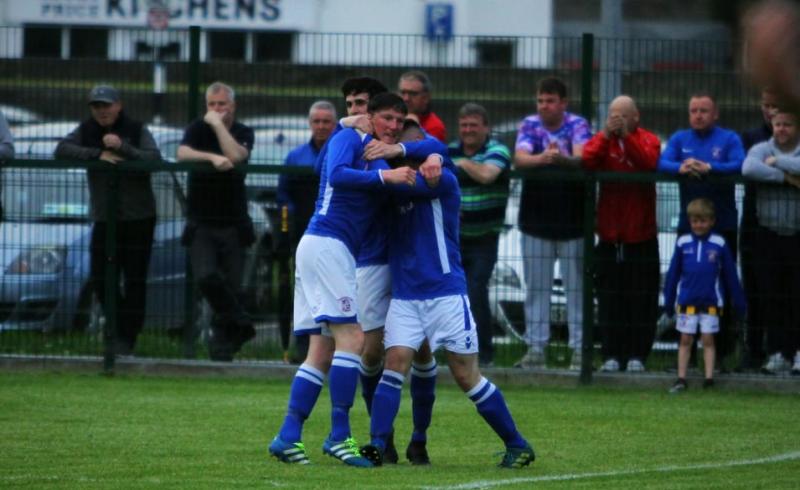 A blistering second half saw Freebooters blast their way back into the race for the Premier Division title.

The Blues made sure that the destination of the silverware will hang in the balance until the last day of the season as they grabbed all three points from Evergreen A.

Henry O’Neill sent the Fair Green into raptures when he popped up the back post to fire Graham Doyle’s side into the lead on 48 minutes. Using their pace to devastating effect the home side carved their rivals open when Emmet Nugent burst on to a through ball, but goalkeeper Philly Johnston raced from his line to block his shot.

The rebound fell to O’Neill, who saw his first effort stopped on the line by defender Jason Quan, but he stayed cool to head home at the second attempt.

The goal was the perfect start to the second half for Freebooters, and totally at odds to how they began the game. Knowing that a win, and nothing less, would leave them with a title shot in their last game of the season away to Thomastown United A, they made a disastrous start when falling behind with two minutes.

Mikey Drennan silenced the Fair Green when profiting from a skewed clearance, picking up the ball on the left before sliding an angled shot under netminder Ciaran Farnan.

Freebooters were stunned but were quick to fight their way back into contention. Both Paddy Cahill and O'Neill had chances to level matters, but twice 'Booters were denied by the woodwork.

Freebooters kept pressing and got their reward when O’Neill levelled matters on 14 minutes. Nugent was the provider, heading a telling Aidan Nolan cross back across goal for O’Neill to finish from close range.

Nugent was a real threat all evening and was a whisker away from giving Freebooters the lead just four minutes later. Using his pace, he latched on to a Jack Poyntz throw and sped towards goal. Racing into the box he poked a low shot beyond Johnston, but the ball rolled past the outside of the far post.

Freebooters’ attacking persistence paid off when O’Neill grabbed his second goal to push them ahead, but they needed the help of Ciaran Farnan to stay there. The ’Booters netminder had to be at his best to keep out Mikey Drennan’s stinging 51st minute free-kick, moving smartly across his line to claw the ball out of the top left corner.

Evergreen fought hard to get back into the game, but with Paddy Cahill and Divine Amaukwu holding a firm line across midfield they found it hard to break their hosts down. They kept pushing but were caught cold when ’Booters stretched their lead with 17 minutes to go. Nugent coolly converting a penalty after Craig Wall was upended in the box following a swift counter-attack.

Freebooters were on their way to three points but added some gloss to their performance with a fourth goal two minutes from time. David Doyle and Joe Banville sparked the move that ended with Craig Hayes stabbing home from close range.

The result means that Evergreen’s title charge is now out of their hands. Freebooters travel to United Park on the last day of the season, needing a win to take the title. Thomastown can still nab the silverware, but they must beat Freebooters first - do that and they’ll edge the Blues out and set up a playoff with Evergreen.