Evergreen A 2, Thomastown United A 0 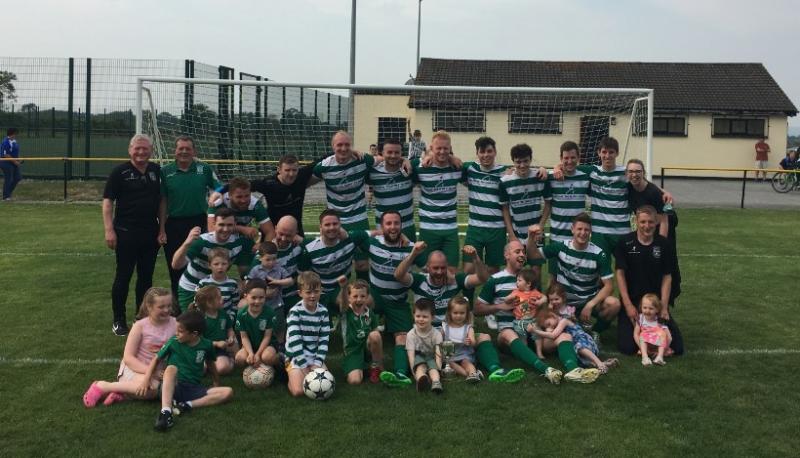 Evergreen’s Cup was filled to brim with success as they toasted success at the double on Sunday.

Gary Maher’s A team retained their second title of the season as they made sure the McCalmont Cup went back into the Kells Road trophy cabinet.

A goal in either half from Jamie Owens and Mikey Drennan did the trick as the city side beat Thomastown United A 2-0 in Derdimus.

Owens broke the deadlock in the 11th minute, acrobatically finishing after a Chris Whearty shot flew into his path.

And Drennan made sure of his side’s 14th Cup title (they are now one behind table toppers Freebooters) when he coolly converted a penalty 11 minutes from time.

While there was disappointment for Thomastown they still have a chance to end their season on a high note. They play their final Premier Division game of the season on Wednesday night, knowing a win over Freebooters A will earn them a title playoff – against Evergreen A!

Freebooters still have a big say in the title, with a win guaranteeing them the spoils. Should the sides draw in Thomastown (kick-off 7.30pm) then Evergreen A will win the league and complete the treble for the second successive season.

The McCalmont Cup was the second piece of silverware to leave Derdimus in Evergreen’s possession on Sunday.

Conor O’Neill’s Evergreen C captured the Division One Cup when they beat Freebooters B 2-1.

Gavyn Blanchfield bagged the winner early in the second half after Cian Morton had cancelled out Gavin Walsh’s opener for Sean Doyle’s Blues.