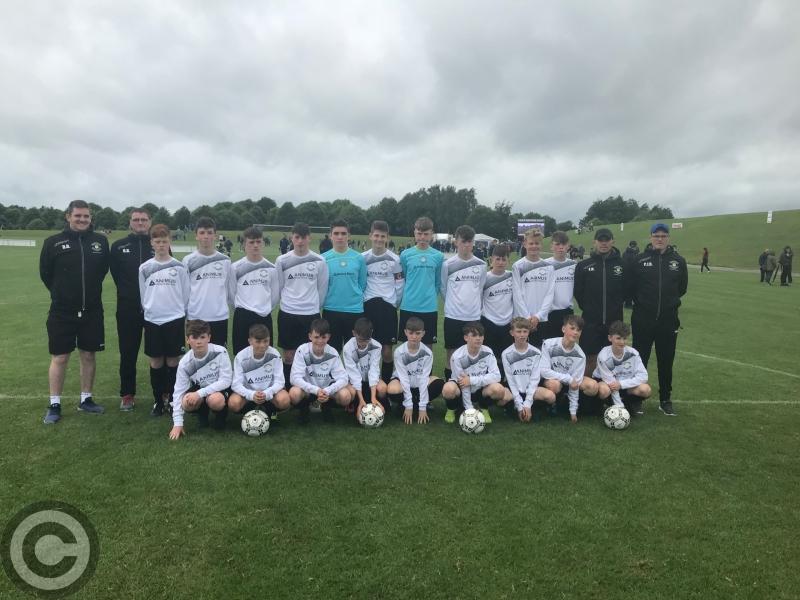 The Kilkenny & District League's Kennedy Cup team made a good start to the Kennedy Bowl, beating Inishowen in the quarter-finals

The Evergreen player’s early strike paved the way to a good victory for P.J. Brett’s side as they got past the Inishowen League and booked a place in the semi-finals of the Kennedy Bowl.

The Kittens were impressive when pressed into attack, but couldn’t turn their dominance into more goals. Dunne had a chance to bag an early strike when played through by Cillian Kelly, but the Inishowen netminder stayed big to make the block.

With Cillian Hackett lively in midfield chances continued to flow. Mikey Raggett brought a good save from the goalkeeper, while Nathan Murray saw this thunderous shot come back off the crossbar.

The pressure paid off when Dunne broke the deadlock in the 15th minute. Linking up well with Cillian Kelly he broke down the left and, from the narrowest of angles, squeezed the ball inside the far post.

Kilkenny continued to press for more goals in the second half, going close with a quick Hackett shot that flew over, before Cillian Kelly secured the win with their second two minutes from time. Sean Moore set up the goal, delivering a menacing cross to the back post, where Kelly ghosted in to finish with a cool header and score his third goal of the tournament.

Kelly had a chance to double his tally soon after when, following some neat interplay with Robbie Ring, he was fouled in the box. He scored his first penalty but was made to retake it for encroachment - he couldn’t get the better of the Inishowen keeper at the second time of asking.

Kilkenny now advance to a Bowl semi-final meeting with Limerick County tomorrow. Kick-off in the University of Limerick is at 12.30pm. For more on Kilkenny's progress in the Kennedy Cup, click here