Looking for a new challenge? This Kilkenny club has something you should Tri! 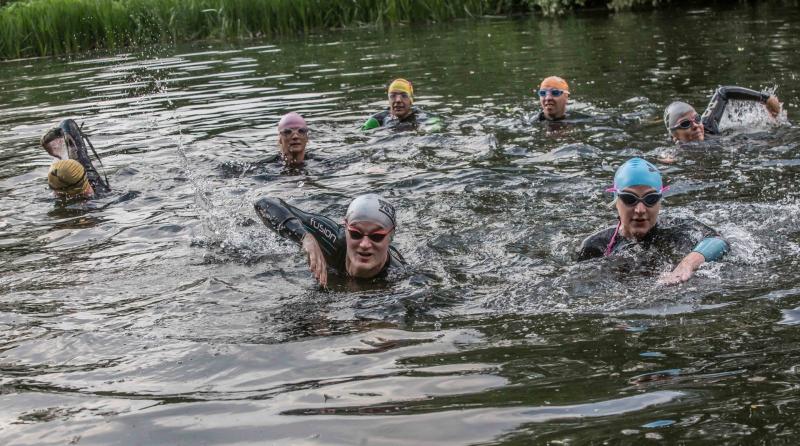 HAVING A SPLASHING TIME! J.D. Flynn and Roisin O’Brien lead the way as members of the Kilkenny Triathlon Club take to the River Nore for some swimming training PICTURE: PAT MOORE

Kilkenny had long been recognised as a sports-mad county, but in the last few years the Cats have taken things to a new level!

The world has been bitten by the bug of multi-sports events and Kilkenny is no different. The Kilkenny Triathlon Club has gone from strength to strength from their early days in 2010 – and they’re looking for more and more people to join their ranks.

“There are a lot of misconceptions that to do a triathlon you have to be super fit but that’s not the case,” explained Roisin O’Brien, club member and PRO. “As a sport triathlon is so approachable – there’s something there for everyone.”

Whether it’s on a jog through the Castle Park, a cycle on the road or a dip in the local pools, the colours of the triathlon club have become more prominent in recent years. No surprise really, given the numbers who have taken the event to their hearts.

“Triathlon is the fastest growing multi-sport in the world at present,” said Roisin. “It’s huge – the popularity it enjoys across the globe is insane, especially when you consider where it was five, 10 years ago.

“At that stage you might not have known many people who did triathlon whereas now we all have a friend, relative or neighbour who is involved in some capacity.

A big reason for the rise in popularity is that people have become more conscious of their health in recent years,” she added.

“People appreciate their health so much these days. Obesity has been tackled so much in recent years that people have become more health-conscious.

“Mental health is a big factor too,” she added. “Sport and physical activity are so beneficial. They can be a massive factor in keeping healthy on all fronts.”

The rise in popularity has led to a boom in new clubs and events, a popularity that is matched with new members joining Kilkenny all the time.

“There are new clubs regularly coming onstream in Ireland, with the numbers in each one growing and growing,” she said. “Kilkenny is among the biggest outside of Dublin, which is amazing to hear.

“It’s great to go to a competition and see people kitted out in the club colours from head to toe. It’s a great show of support, especially for newcomers, when you’re away from home to see so many people from the Kilkenny club there too.

“You might not know all the members but when you see other people there in their club kit, stretching and shouting their support it gives you a big boost,” she continued. “The camaraderie is just brilliant.”

Some do it to try and break records, for others it’s about having fun. Either way it’s all about enjoyment. All you need is a bike, some runners – and some water-wings!

“You do need to be able to swim,” said Roisin. “That’s the only real requirement – the rest you can get through.

“When I started doing triathlons I walked a lot of the running sections for the first year. It took a bit of time but I got better at it. It’s the same for anyone who takes up the sport – you can start at any level.”

“Triathlon is a lot more approachable,” she continued. “People know you don’t have to be crazy fit to do it; there are so many different levels and paces you can do it at, not to mention distances and events. It really has something for everyone.”

Like a lot of people involved in the club, Roisin was encouraged to give it a try by a family member. Once she tried it, there was no going back.

“I never thought I could do a triathlon, never ever, but I was really proud when I did. It was great to be in a position, physically and mentally to be able to do it.”

“I joined the club after my brother, who was a member for a number of years, convinced me to buy my first adult bike,” she said. “Most people I speak to have been roped in by someone else, while I would also have encouraged a number of my friends to give it a go. Some stuck with it, others focused on the cycling or running elements but it’s a sport everyone can try.”

The idea of taking up a sport where you tackle three different disciplines can be a little off-putting, but there is plenty of advice on offer from welcoming club members.

“It can be a little daunting to begin with,” Roisin said of completing your first triathlon. “No matter how sporty you are it’s good to have the basics. It was good to have my brother there to give me some tips, which is why I find it so important now to pass on advice to anyone who is thinking of doing it, to run through the basics – things like getting on a bike in a group of people.

“Even if you’re a competent cyclist, when you’re in a group and there’s speed involved it can be a bit scary. For that reason, it’s nice to have a friend there who can help bring you up that first big hill or out on to a main road and get you over those first steps.

“The club are brilliant that way as they are so encouraging,” she added. “We have a dedicated officer who looks after beginners and New to Tri members which is hugely beneficial, while we’re always available on email, phone or Facebook if people have questions they might not want to ask in a group.

“We’re very much there to support members,” she stressed. “That’s evident in the way that new members have complimented how supportive the club is.”

The support doesn’t just come when members are out competing in events. Training nights are also beneficial when it comes to gleaming some tips. 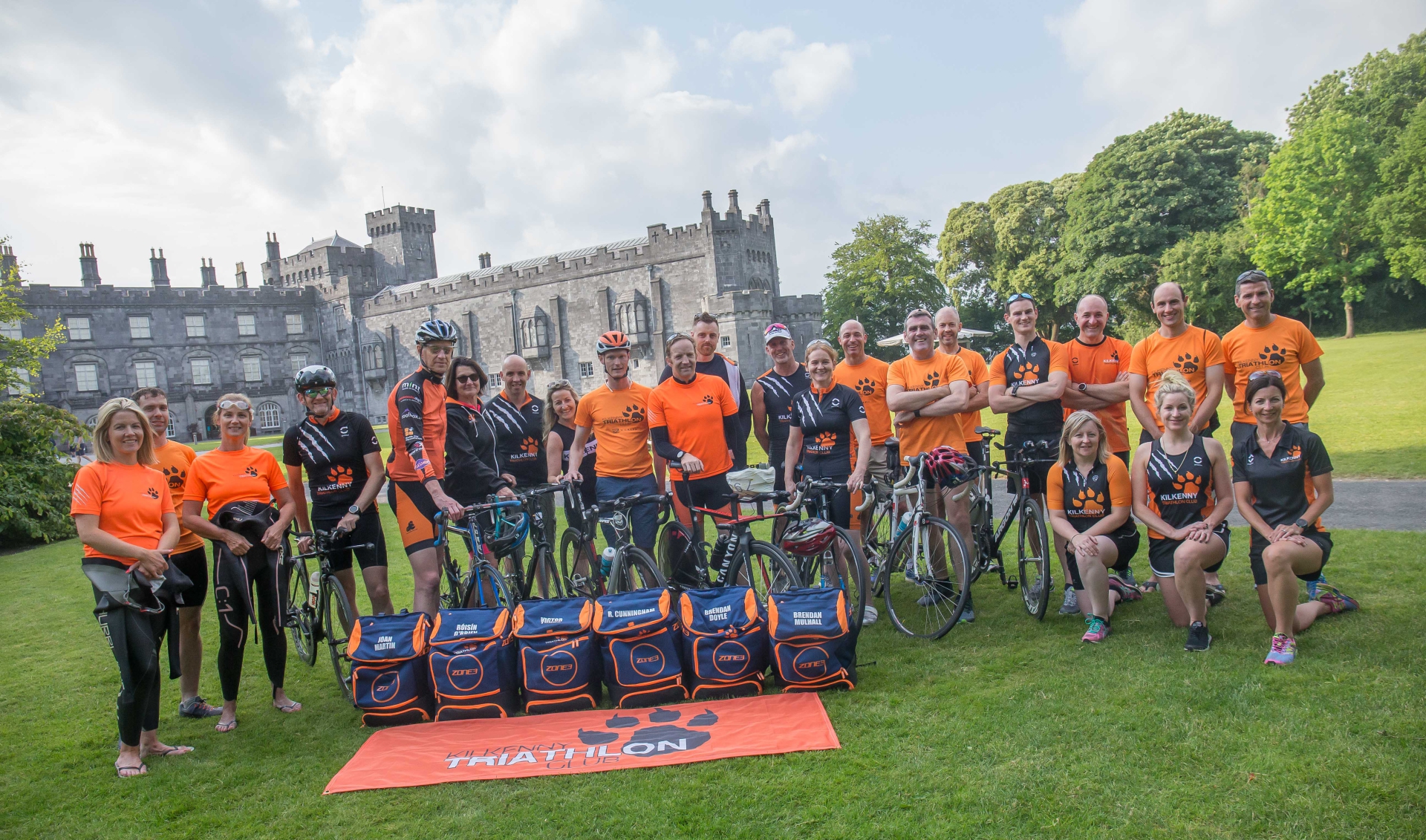 Club members on parade at Kilkenny Castle, which will be the base for the Kilkenny Triathlon on July 15

“We have a swimming group for beginners, as well as intermediate and advanced swimmers,” she said. “They’re very popular and are run by Robin Newsome and Eoin Molloy at the WaterShed.

“A lot of people who wouldn’t do a full triathlon are still members of the club, just to avail of our training plans and programmes, all of which are keenly priced.”

While some people may never take on a triathlon, Roisin admitted that completing one brought a great sense of achievement.

“Crossing the finish line in my first event at Tri-Athy a few years ago was one of the most amazing moments I’ve ever had,” she said.

“I never thought I could do a triathlon, never ever, but I was really proud when I did. It was great to be in a position, physically and mentally to be able to do it.

“It’s totally addictive,” she added. “We always tell new members that it won’t be long before they get the bug and most of them do!”

And plenty of new members will get a chance to whet their appetite when Kilkenny host their annual triathlon next month.

“Our event, which is on July 15, will be the first event for many locals,” she said. “We have two distances for the triathlon. Swimming is usually the hardest discipline so there’s a short swim – it’s called the Try A Tri distance – and it’s a 250m swim.

People may be building their training towards this event but, for the organisers, the hard work started a long time ago.

“The initial work began after Christmas,” Roisin said. “We are very lucky to have grateful that we have Kilkenny Castle as our base, while there’s a lot of liaising with other parties like Water Safety, the Gardai and other clubs. We’re aiming for between 400 and 450 participants this year, our biggest number yet, something which is also beneficial to Kilkenny from a tourism and hospitality point of view. 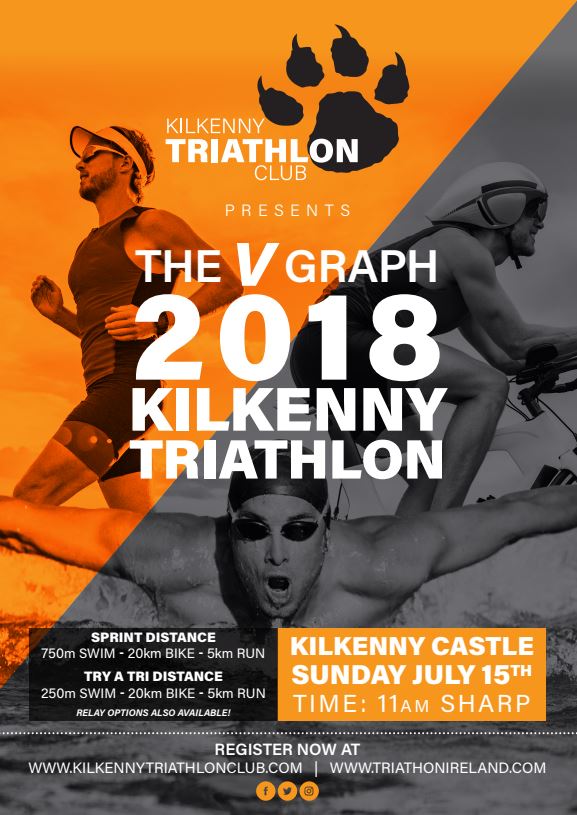 “We also have a team in place on the day to assist people who may be new to triathlons or the Try A Tri, whether it’s help with their wetsuits or racking a bike or even to explain the route.

“They will be there to put people at ease and help them get more enjoyment from the day.

“That’s something we’re happy to provide,” Roisin said. “It helps to make our event stand out as you wouldn’t get it at every triathlon. It’s a comfort for new people and encourages them to come back again and again.”

Established in 2010, Kilkenny Triathlon Club now boasts over 200 members. One of the biggest clubs outside of Dublin, members have competed in events throughout the world, from Barcelona to California.

The club host a duathlon every April and their main event, the Kilkenny triathlon, every July. The triathlon features a ‘Try a Tri’ option (250m swim, 20km cycle and 5km run) which is ideal for beginners as well as the regular sprint distance (750m swim, 20km cycle, 5km run). A relay option is also available.

A KTC Assist Team will be on standby on the day to help with set up, course questions and gear assistance, while a bike mechanic will be onsite to assist on the day.

With prizes in each category, an after-party in Kyteler’s Inn and goodie-bags for all competitors, you can enter by logging on to www.kilkennytriathlonclub.com