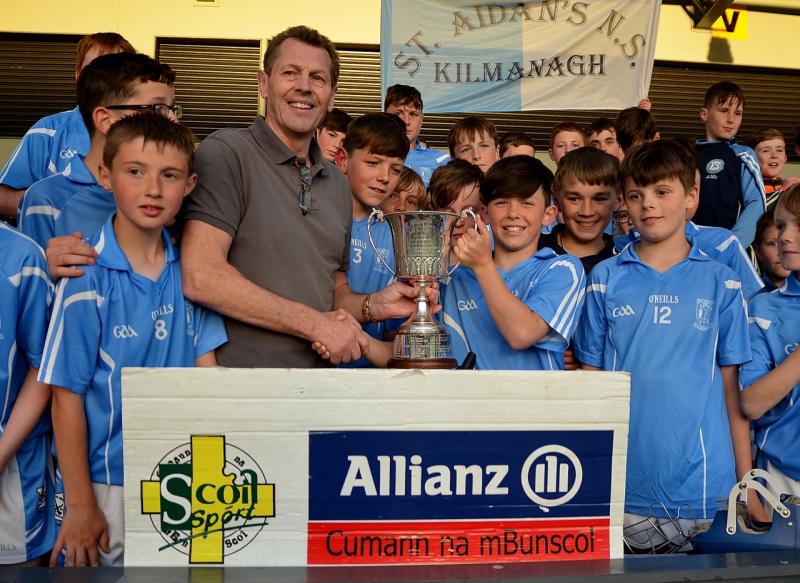 Kilmanagh produced the perfect hurling storm and literally blew away Clara in this high class Allianz Roinn A Cumann na mBunscoileanna final in Nowlan Park.
Clara are a serious outfit, but they came up against a team that could do no wrong on the night and that had stars in every department and they were well beaten in the end.
The large crowd was treated to hurling par excellence as Kilmanagh dictated matters from an early stage .
It was the boys from Kilmanagh who got the all important fast start with an early goal from a Ryan Corcoran placed ball.
He shot over another free before full-forward Ciallin Brennan picked up the sliotar and blasted to the net from a tight angle to give Kilmanagh a commanding early lead.
Shaken
Clara were shaken, but they recovered well. They stuck at it and the excellent Conor Hoyne opened their account with a fine point after 10 minutes.
Kilmanagh were able to up the tempo again and they tacked on two quick points from Jake O’Brien and Aaron McEvoy.
The winners maintained the pressure on the opposition and moments later Ben Young broke through to finish to the net for their third goal of the half.
The teams exchanged points in the final minutes of the half to leave the score 3-7 to 0-3 at half time.
Opened scoring
Kilmanagh’s Ryan Corcoran opened the second half scoring with an excellent point from play before both corner forwards, O’Brien and McEvoy got on the scoreboard again.
Conor Hoyne kept the scoreboard ticking over from a battling Clara side, but the killer score came on 34 minutes.
The alert Ben Young cracked home his second goal of the game for Kilmanagh.
Both teams battled on to the end of a hard fought contest, but it was Kilmanagh who had that killer instinct in front of goal and they were deserving winners of their first Roinn A title in 26 years.
It was heartbreaking for Clara because for the second year in-a-row they felt the pain of defeat.
Lost narrowly
They lost out narrowly in last year’s Roinn B final before opting to compete in Roinn A this year.
For Kilmanagh, however, following their defeat at this stage last year, it was celebration time when captain Jeff Neary raised the Joe Dunphy Cup aloft as they returned to the top of the tree in Kilkenny schools hurling.
Teams
Kilmanagh - Seán McGrath; Aidan Cahill, Seán Roberts, Elliot Teehan; Jeff Neary (capt), Billy O’Neill (0-1, free), Dean O’Brien; Ryan Cody, Charlie Cleere; Ryan Corcoran (1-11 [1-6 frees, 0-2 65s’), James Casey, Ben Young (2-0); Jake O’Brien (0-2), Ciallin Brennan (1-1), Aaron McEvoy (0-3).
Subs - Martin Brennan, Pat Purcell, Cillian Hoyne, James Brennan, Tony Butler, Frank McCluskey, Paidi Egan, Aidan Comerford, James O’Halloran, Robbie Tector
Clara - Cian Kelly; Ben Crow, Paddy Walsh, Thomas Langton; Alex Firbank, Rory Glynn (capt), Diarmuid Langton; Eoghan Bennett, Ruarc Sweeney; Seán Carriage, Harry Boyle, Eoghan O’Brien; Joe Power, Ned Langton (0-1), Conor Hoyne (0-5, four frees).
Subs - David Barcoe, Eoin Corr, Dillon Cummins, Seán Byrne, Jake Maher, James Cody, Shane Walsh, Connor Lynch, John Bergin, Ross Gormley, Liam Carrigan, Kian Kealy, Daniel Murphy, Diarmuid Matthews Downing
Referee - Sean Cleere (O’Loughlin Gaels).