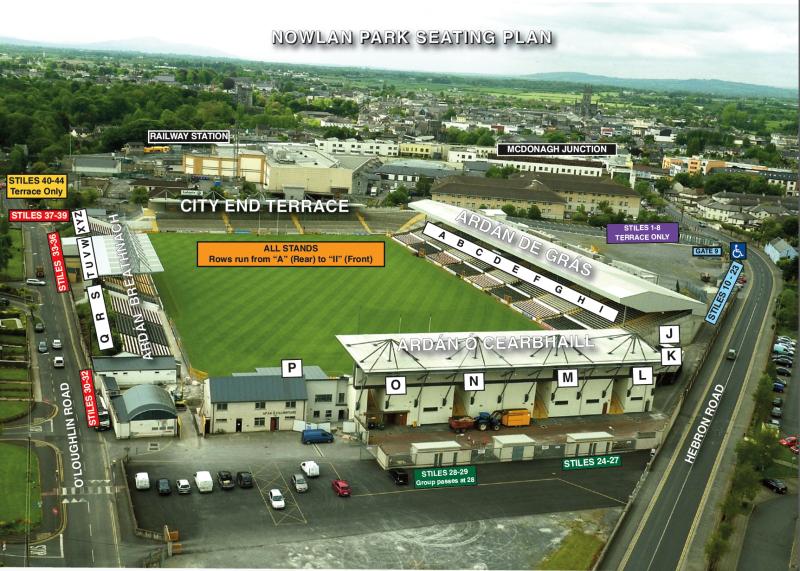 Nowlan Park can seat 17,000 fans and has three different stands

Kilkenny’s Nowlan Park will host an All-Ireland hurling final and semi-final over the next few weeks.
The Noresiders will have home advantage for the All-Ireland intermediate final against Cork on Saturday week.
And the under-21 semi between Cork and Wexford has been fixed for the ’Park on Saturday, August 4 (4pm).
Only two teams entered the intermediate championship this season, and it almost fell by the wayside.
Cork, who carried big senior and under-21 squads, made a strong appeal to Croke Park to play the championship, even if it involved only one game.
Their request was granted and their team will be made up by the back end of both panels.
Last year Kilkenny travelled to Pairc Ui Chaoimh for the decider, and they took the title.
Now it is their turn to stage the showdown.
Manager David O’Neill (Graigue-Ballycallan) and selectors, Tom Phelan (St Patrick’s), John Brennan (Thomastown) and coach, Nigel Skehan (O’Loughlin Gaels) have a squad in training.
Stephen Staunton (St Patrick’s) will be captain, and others involved include Michael Carey (Young Irelands), Conor Flynn (Graigue-Ballycallan) and Fenians pair, Conor Tobin and Willie Brennan.
“Anyone we asked jumped at the opportunity to play,” insisted Mr O’Neill, who said players involved in the county senior and under-21 panels would feature.
Kilkenny must put a whole new team together because all who played last season are ineligible.
“We reckon we have the makings of a decent team,” Mr O’Neill suggested.