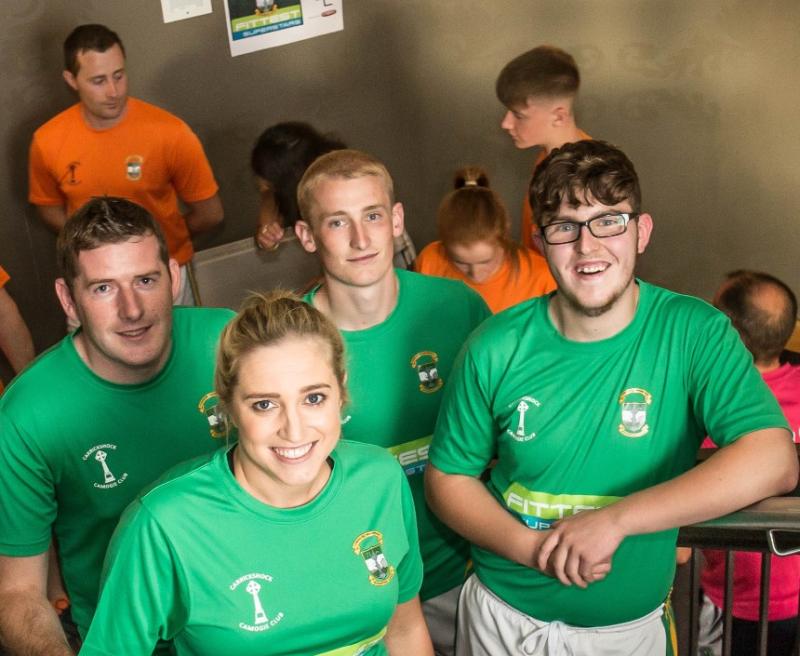 When we went down to Hugginstown GAA hall weeks ago, there was a bit of uncertainty about what exactly was going on.
Even when the ebullient Davy Fitzgerald pitched his Superstars Fitness concept, there was wonder.
How could you replicate the popular Fittest Family TV game show in a hotel ballroom? Carrickshock GAA took on the challenge.
On Saturday night in the small hours, we left the comfort of the Griffin Hotel Kilkenny with the head buzzing.
The redoubtable Davy caught the mood: “I have been running these events around the place, but this is my first time in Kilkenny county. What a commentary tonight’s effort was on the unity, the loyalty, the self- support it has been for the Carrickshock community.
“It has been an astonishing success. I’d say that every man, woman and child from Carrickshock is here. They have shown unbelievable support for their community, and it shows the kind of esteem in which Carrickshock GAA is held, and the collective pride people have in their own place.
“It has been an unbridled pleasure doing business with them,” said he with a glint in his eye.
Fourteen teams of four (a senior hurler, a retired hurler, a camogie player and a youth over 16 years) went to post for the seven event obstacle course.
Course in hotel grounds
The course was built around the perimeter walls of the spacious Hotel Kilkenny ballroom. Every competitor was issued with two 10-stone bags of sand.
They were their tools for the challenge. They had to scale two walls, one 6' and one 10' and get the bags of sand across as well.
They had to crawl through a 2’ 6” pipe with the bags. They had to carry the bags to a holding spot while they engaged a monkey bar contraption, swinging from bar to bar.
The 10 foot wall came next – fairly daunting. They had to walk along successive three inch wide steel bars. They had to crawl along the stage floor under an army camouflage netting, and finishing on an elevated platform with you know what.
Prior to all of this the team were put on spin bikes to travel as far as possible in one minute, and finally the teams had to hang tough on an overhead bar for as long as possible.
All teams had to arrange their own sponsorship. A lot of money was harvested by the club.
The main sponsors were Uniflu, Doyle Concrete, O’Dwyer Timber Contractors, George Power Farm Buildings and David Kennealy Construction Ltd.
When the action started the crowd of over 1,000 really got involved. It was amazing to watch Paddy Farrell (Surfbox team) tear and pull bags up over the high wall.
Niamh Dunphy (Crisenda Oil team) was as good as any competitor as she fired herself through the monkey bars, while Jim Rice (Malzard’s Pub) did everything he could think of to get his team into the winners enclosure.
Offaly hurling star, Davy Franks and Kilkenny hurler, John Power fought for supremacy as if Cody was on the sideline, and the Liam Mac Carthy was up for grabs for the Michael Lyng Motors team.
Aaron O’Neill and William Duggan (Roto Spiral) jumped the six-foot wall like Dawn Run, while Aisling Farrell and Kevin Farrell (Martin Cuddihy Construction) gave a Bradley Wiggins exhibition on the bikes.
The Gerry Comerford Well Drilling team had the powerful John Tennyson on board. So fired up was he it appeared he could have gone through the walls.
The popular and charismatic Larry O’Shea (Frisby & Associates) went over the walls like a lad who had spent his young years climbing to rob orchards. The Power Training team had Grace Aylward, Michael Rohan and Edward Power on board.
They needed every bit of Davy’s endless encouragement to get home. Carrolls of Knocktopher depended on Maria O’Carroll, James Grace, Luke McNamara and Kieran Holden.
They clocked a good time of 5 minutes 46 seconds on the obstacle course.
Pat Tennyson John Dalton, Christine Power and Josh Treacy carried the Glanbia banner with pride.
Nickey Murphy Core Drilling team had a great obstacle time of 4.30 but the wall nearly did them. James Kenneally Construction had great triers in Sabrina Walsh, Damien Walsh and John Raggett.
The surprise Premier stars team of T.J. Reid, Liam Cahill (Tipperary), winning race jockey, Katie O’Farrell from Carrickshock and TV sports presenter, Lauren Guilfoyle nearly brought the house down, and a few obstacles, with the reception they received.
It was a great night. All were winners, the biggest one the Carrickshock Community who will ring-fence the money for further pitch developments.
Well done the whole lot of you !