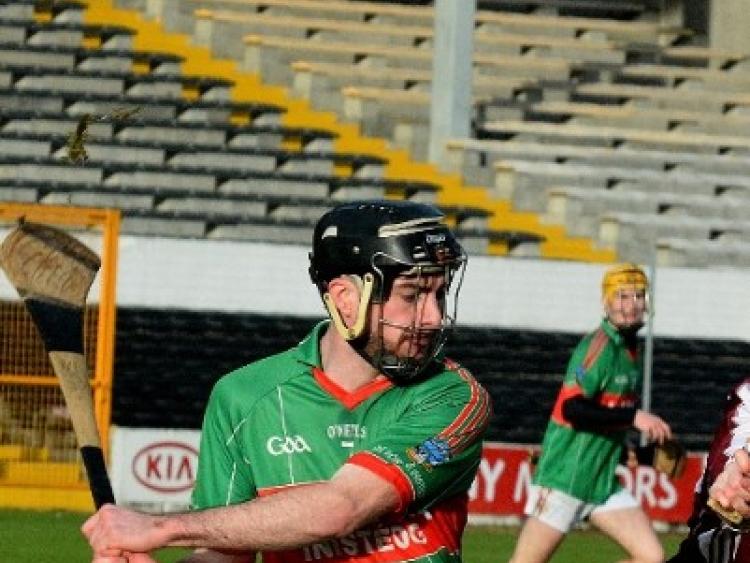 Kevin Murphy was the star man for the Rower-Inistioge

A well worked goal in the 48th minute that was tucked away by top scorer, Kevin Murphy, put the Rower-Inistioge on the road to their first win in the Kilkenny senior hurling league.
Murphy was at the end of a lovely move involving Pat Lyng and the hard working Tom Murphy, and the goal left Danesfort with a mountain to climb as they were left 1-15 to 0-14 behind in this lively enough clash at Mullinavat this evening.
The in-form Murphy added two quick points and the excellent Ruairi Galavan blasted over a free from all of 80 metres to push the winners 1-18 to 0-14 clear. The Rower had a man red carded nearing the finish, but the loss made no different.
They finished with a blast of 1-5 without reply during the closing 12 minutes to deservedly take the spoils.
There was never a lot between the teams during the first half after they shared equally the opening four points. Sean Lester posted the lead point for the Rower, and they pushed the pace most of the way from there.
Danesfort finished the half well, claiming three of the closing four points per Cillian Treacy, Cathal O'Neill and Richie Hogan, but they still trailed by 0-8 to 0-10 at the break.
The losers dominated the early stages after the break and caught up at 0-13 each in the 42nd minute. However, Kevin Murphy knocked them back when pointing a 65 and when he goaled later, the Danesfort challenge fell away.
SCORERS: Rower-Inistioge - Kevin Murphy (1-8); Richie Leahy (0-5); Ruairi Galavan (0-2); Sean Lyster, Tom Murphy, Jim Ryan, Cathal Bolger, Tom Doyle (0-1 each). Danesfort - Richie Hogan (0-5); Cathal O'Neill (0-3); Daire O'Neill, Paddy Hogan, Cillian Treacy (0-2 each).